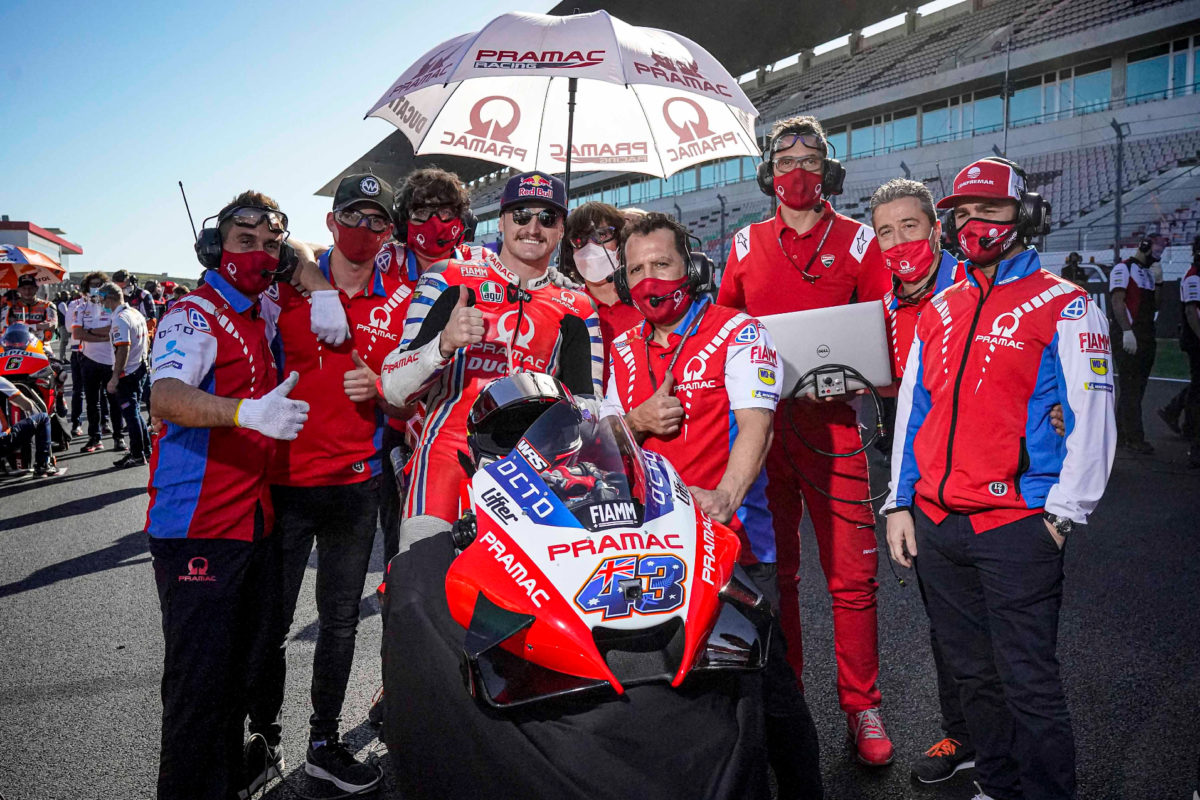 Jack Miller said podiums at Valencia and Portimao were the “just about a perfect way” to farewell Pramac Racing ahead of his move to the factory Ducati team in 2021.

The podium was Miller’s fourth of the season and second in as many weeks after he was pipped by Morbidelli for the win in Valencia.

“Final race for me at the Pramac Ducati team, and I came up with something on the final lap to get second place – hard to top that for the boys really, because the only thing that could have been better was the top step,” Miller wrote in his post-race newsletter.

“Hats off to Miguel though, he was in a race of his own up front. I spent the whole race like last Sunday right behind Franky, and this time I was able to get him.

“Two second places in seven days was just about a perfect way to say goodbye to the Pramac guys after four years.”

Oliveira, who also defeated Miller in August’s Styrian Grand Prix, was three seconds to the good by race’s end ahead of the Aussie.

While Oliveria was out of reach, Miller took solace in enacting revenge on Morbidelli for the previous week.

“Miguel was on another level today, really. He went away so fast from me and Franky that the win was pretty much off the table about two laps in,” said Miller, who will move to the factory Ducati squad with Francesco Bagnaia.

“It was harder than I expected around here to be able to pass and ideally I would have tried to pass Franky earlier, but that works both ways because I figured if I got him late, he wouldn’t have time to get me back.

“In the end, I had him by about a tenth of a second, more or less what he beat me by in Valencia. I’d probably spent 60 laps these last two races behind Franky, so I managed to come over the line ahead of him for one lap at least.”

Miller’s result helped Ducati’s claim the constructors’ championship for the first time since 2007, with Suzuki failing to add to its riders’ and teams’ titles.

The 25-year-old was pleased to finish a career-best seventh in the riders’ standings, and was just seven points off third.

“I’ve really found my groove again with the bike in the last few races and it’s been good to see. But 14 races in 18 weekends… I like riding most weeks but I’m about ready to have a rest I reckon,” Miller said.

“To end up seventh in the world championship, my best finishing position yet and one place better than last year… I’m happy with that.

“Had some bad luck too… we’ll look back and wonder what could have been, it’s been a season for that for so many of us.

“Considering I had four DNFs, it’s been a good year.”