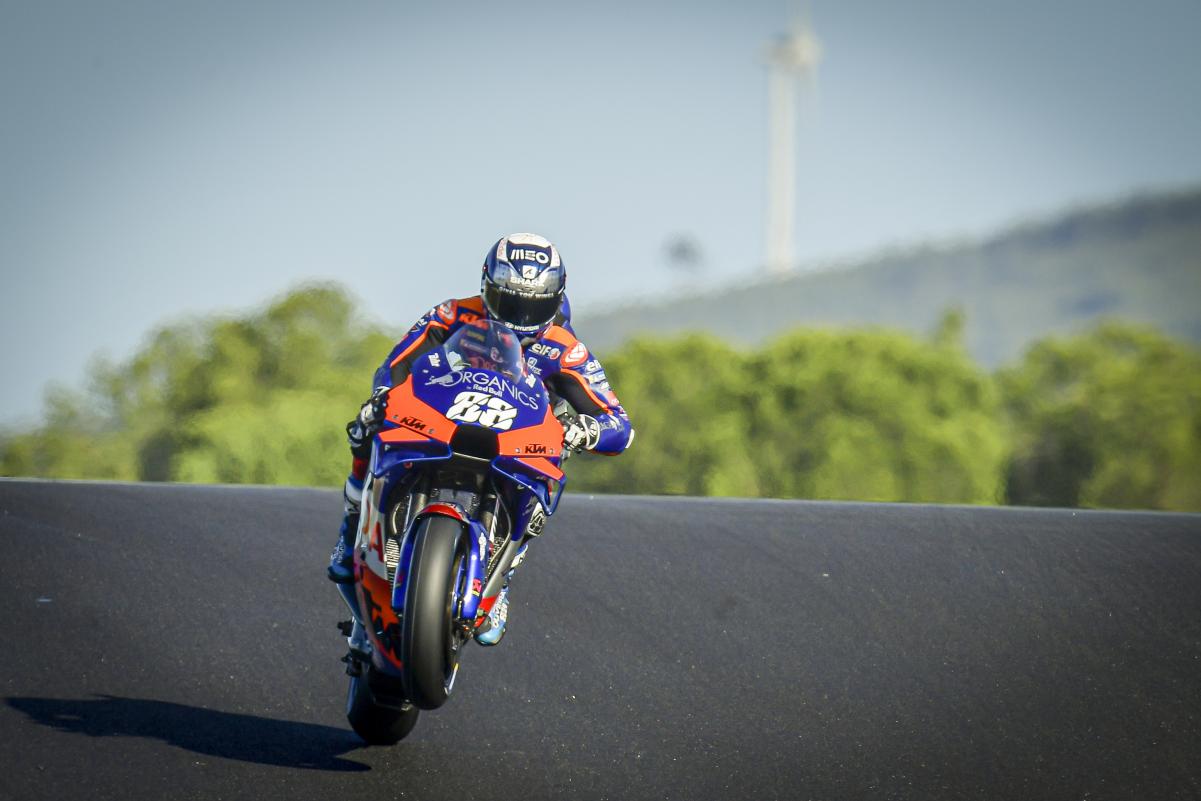 Miguel Oliveira has taken pole position for the MotoGP season finale at Portugal’s Portimao while Jack Miller is set to start third.

The Portuguese rider and the Australian will be split on the front row by Franco Morbidelli (Petronas SRT Yamaha) after the Italian got out of Qualifying 1.

New world champion Joan Mir failed to do that, however, and the #36 Suzuki Ecstar entry is all the way back in 20th on the grid for the first race after the Spaniard sealed the title.

Maverick Viñales (Monster Energy Yamaha) was fastest after the first flyers in Qualifying 2 with a 1:39.689s, but it was Morbidelli who held sway at the end of the first runs with a 1:39.245s.

Morbidelli shifted the benchmark to a 1:39.141s at the start of his second run, before Stefan Bradl (Repsol Honda) and then Cal Crutchlow (Castrol LCR Honda) slotted into second spot.

Morbidelli consolidated his hold on first position when he went to a 1:38.936s next time around, while Miller laid down a 1:39.038s in the final minute of the quarter-hour session.

Oliveira had been shuffled back to eighth when he rode the #88 Red Bull KTM Tech3 machine to a 1:38.892s not long before the chequered flag.

There was still a chance for KTM stablemate Pol Espargaro to put in some fast sectors and while he went quickest to Sector 2 on his final flyer, #44 could only move from 11th to eighth at the time.

That locked in the front row, with Crutchlow qualifying fourth for his final grand prix as a full-time rider, at least, having topped Q1.

Fabio Quartararo (Petronas SRT Yamaha) was fifth all told, from Bradl, and Zarco, the latter of whom crashed at Turn 8 early in his second run.

Brad Binder looked a threat of beating Morbidelli to Q2 but ultimately ended up 13th on the grid with a 1:39.390s after the chequered flag on his Red Bull KTM Factory Racing entry.

Valentino Rossi (Monster Energy Yamaha) is set to start 17th and Danilo Petrucci (Ducati Team) in 18th, while Mir was consigned to 20th after his final flyer in Q1 was cancelled.