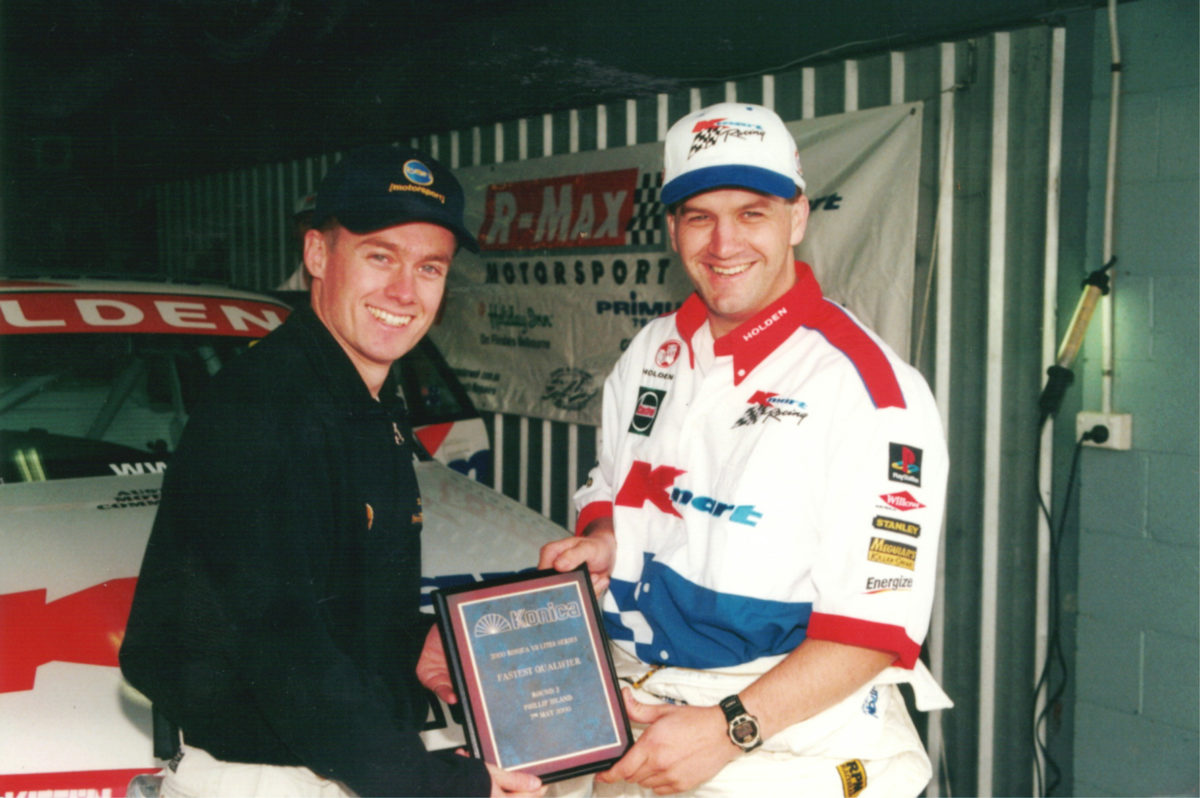 Few people in Australian motorsport history can boast the career experiences that Ryan McLeod can, and his story is nowhere near finished.

It’s hard to know exactly how to describe McLeod; a driver, mechanic, engineer, team boss, car maker. There are very few hats he hasn’t worn. His impact on the industry has reached both Europe and the United States.

Ryan McLeod is the real deal.

He grew up in Dapto, to the south of Sydney, where his father Peter owned a car dealership.

It was through that, while still a child, that he got his first taste of motor racing, when his dad was convinced to race a Mazda RX-7.

A stellar career followed for McLeod Senior, chalking up impressive results such as victory in the Bathurst 1000 with Peter Brock.

“He started racing in 1980, so I was seven and they put a shed, which was really a shed, in our backyard,” McLeod said of his father’s entry into motorsport, and his own first encounter with it as a consequence.

“We lived in Dapto at the time; Dad had a Mazda dealership at Albion Park.

“I think the RX-7 came out in 1978 or ’79. and one of his mechanics had done something with racing previously.

“He decided that he was going to start racing and then he went with one of his mechanics and they converted an RX-7. That came and lived in the back of our house.”

For the better part of the next decade, McLeod cleaned wheels and watched his father race, travelling to the likes of Amaroo Park, Winton and Oran Park (Eastern Creek hadn’t yet been built).

With his own interest in motorsport piqued, and determined to make a career of it for himself, after high school he joined the Air Force.

“I thought avionics is more where I wanted to be; electronics and stuff,” he reasoned.

“I went and applied and got into the Air Force and went down to Adelaide and did all the training.

“I was lucky enough there, when I got to Wagga where I was doing my trade training, that’s where I met Belinda, my wife.” 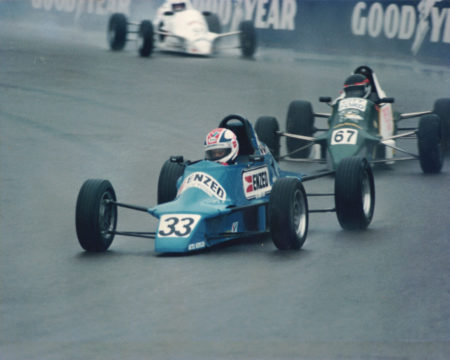 McLeod at the wheel of the Van Diemen

By that stage McLeod’s racing career had already begun, with karting at the local track in Wollongong.

A few years later he graduated to Formula Ford with the acquisition use of a 1985 Van Diemen, courtesy of a family friend.

It came with a catch; the car was in pieces, and needed an engine, but provided McLeod could put it together, he was welcome to race it.

For a time, that saw it live on base in Wagga.

“I had it stored in a spare room. I carried it in there piece by piece in our apartment block on the base,” McLeod admitted.

“When we had to do stand by beds inspection, the warrant officer for the block, he’d come through and we’d lock the door to the room and no one would have the key.

“I think we had to do those inspections on Monday and Wednesday.

“I can’t remember exactly, but everyone in the block knew, and sort of half of the base was working on making bits and pieces for that car.

“The machine shop was doing things, the electrical guys were doing stuff, and the fab bay was doing a few things and paint shop was painting a few parts and it was all trade training stuff!”

In that car, he raced against the likes of Steven Richards, Steve Ellery and Gavin Monaghan before lending it to young Jason Bargwanna for a driver test, his first in a Formula Ford.

Mawer was a key player in the Sydney motorsport scene, and his workshop was something of a breeding ground for talented youngsters embarking on the formative stages of their careers.

“I think he bought a wheel repair business off someone and he was out there, which he still is, at Orangeville.

“He’d a beautiful property up on the hill. There was a big shed on it. I took my car there and he was a really old school.

“He introduced me to the Caroll Smith books and all that stuff.

“I was in the Air Force and they were teaching me about aircraft bolts and running wires, properly installing all the things and working processes and stuff, and then I ended up with Dave.

“Dave showed me all about rivets and how to put a Formula Ford together; everything from the gearbox to how to do up a nut and bolt properly and what it all does and how it works.

“Anyone who knows Dave knows how particular he is. He’s a fantastic bloke, whom I still call on for advice nowadays

While this was going on, back at home McLeod’s father had started running Citroens after becoming a dealer for the French marque.

That opened new doors, and a relationship with Barry Jones.

“Dad was running the Citroens in the Bathurst 12 Hour because he was a Citroen dealer,” McLeod recalled.

“They were really just road cars that we let a bit of the gas out, or the nitrogen out of the air suspension to make it a bit stiffer, then they raced them.

“Barry Jones was involved (and) I started going to Barry Jones’ place. He had a really well-renowned rotary workshop in Yennora, and he was a little bit different to Dave Mawer.

“Dave was a bit more traditional and obviously Barry, being rotaries, that was a bit more new age or cutting edge at the time, a bit different. He had been doing my dad’s engines for years.”

After the Citroens had seen action at the 12 Hour, McLeod repurposed one for the Australian Production Car Championship.

“There was Suzukis and Nissan Pulsars, so Phil Alexander, Kevin Burton and Murray Carter all had fast Nissans,” he recounted.

“I think Phil Morris, who now runs Motec, he was in it.

“I ended up at Bathurst in ‘94 in the Production Cars and racing against Craig Lowndes because he was driving Phil Morris’ car and I was driving the Citroen, I think.

“We did the Easter race in ’94, and then I went home and I said to Dad, which is funny just to think back now; I think it was August, I was still in the Air Force and I was doing another trade training at Richmond.

“I was working on the Hercules and the new model Hercules was coming in and we were doing trade training on that.

“I said, ‘There’s a car for sale in the back of (a motorsport magazine), Dad we should buy’.”

The car turned out to be the VL Commodore driven by Kevin Bartlett and Russell Ingall in the 1990 Bathurst 1000, built by Ron Missen.

“We bought that and the engines were blown up and they were in bits,” McLeod said. 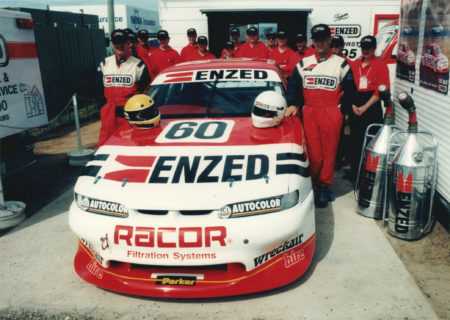 “We paid $26,000 for that car with all the bits in August, and we put it together and took it to Bathurst and raced it there in October. I would shudder to think what that car would be worth now!

“I remember we did a dozen laps at Amaroo Park on the way to the race, on the Tuesday, and then went up there.”

At that point, McLeod wasn’t settled on exactly what he wanted to do. He was racing, fixing and preparing cars; he hadn’t yet settled on defining himself or limiting himself to one particular facet of motorsport.

In many respects, that still rings true to this day.

“I was wanting to be a race car driver first and foremost, but everything I drove, I had to fix or build or repair,” he admitted.

“From the Formula Ford, we had the Citroens and the production cars and then to the VL Commodore.

“We got rid of the VL, because it got crashed in that race by the co-driver. One of the wheels failed early on .

“They stripped that chassis afterwards and we bought it from Jeff Grech. Just the chassis and another car off someone and tried to marry the two things together, which in hindsight was a silly thing to do, but that’s all we could afford to do.

“In that time, I started to get involved in working on the cars a bit more, particularly in the electronics,” he added.

“I had I think one of the first data loggers, the PI dashes and early Motec stuff.

“I made the wiring harness for the engines and stuff just from what I’d learned in the Air Force, that’s where all that started.

“I drove there with Darren Pate for ’97, but along the way I met Graham Watson.”

Through his relationship with Watson came a spell racing open wheelers, specifically the Formula Holden which had been driven by Mark Webber in the 1996 Australian Grand Prix support race. 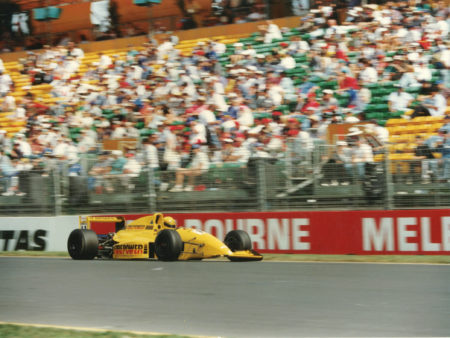 McLeod at the Australian Grand Prix in 1997

In his first race with the team, the 1997 Australian GP, he was instructed to pick up the team’s other driver for the weekend from the airport.

“Graham was always thinking at the last minute,” McLeod said.

“He said to me, ‘Oh, you need to go to the airport, pick this young guy up who’s going to drive the other car. When you get there, he’ll have a bag of money’.

“If he’s got that, then jump in the van and drive to Calder and we’ll run the cars at Calder before we go into the grand prix.

“I had my van, which was loaded up with all the bits and pieces for the race and went to Sydney airport, and Scott Dixon turns up.

“Pretty much, we went down there to the Grand Prix and I ran out of money for the following round, which was at Calder and (Scott) didn’t.

“He had Kenny (Smith) and a few people helping him from New Zealand. He was a bit quicker than me too.

“He was obviously a young guy and a bit fiery, and he drove well.

“I think we qualified next to each other and ran sixth and eighth in the race or something, but he got the gig for the next round in the car that I’d previously been driving, and then I turned into his mechanic for the year.

“That was my first year as a full mechanic on someone else’s car.”

The relegation in roles left him frustrated at the time, before the realisation dawned that he was still involved in motorsport and, best of all, being paid.

“I was, first and foremost, a racer who could work on the cars rather than a mechanic who could drive a bit, I thought. I think that would be a fairly fair assumption.

“I ended up working for Scott for the year, but I put my head down and sure enough, we got to the last round at Amaroo Park.

“The driver who was supposed to drive the second car, didn’t turn up or couldn’t get there; something didn’t happen.

“Kenny Smith came out to drive the car and he did a few laps in practice and said, ‘No, that’s not me’.

In the end, the car suffered a wishbone failure and pitched McLeod into the wall.

“At least I got to drive it and then I had to go and fix it,” he joked.

McLeod’s career carried on and, while he remained a competitor, his time in the seat gradually reduced as business interests took over.

In the coming years he would return to touring cars before founding Racer Industries and MARC Cars, the story of which can be read in Part 2, next weekend.