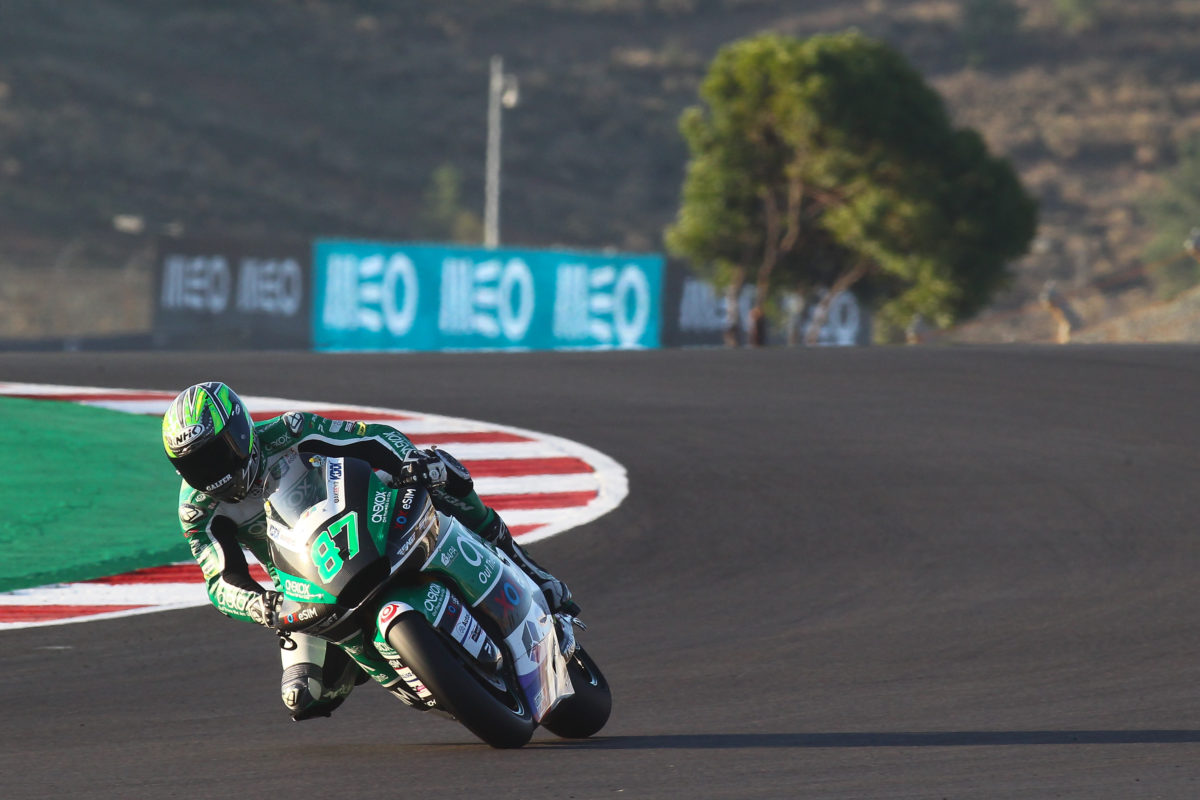 Remy Gardner has taken the third pole position of his career in qualifying for the Moto2 season finale at Portimao.

The Australian was quickest in the intermediate class in Portugal with a 1:42.592s on his Onexox TKKR SAG Team Kalex, just over a tenth up on the field.

Luca Marini (Sky Racing Team VR46 Kalex) was first of the four title contenders with a 1:42.710s and Fabio Di Giannantonio (Beta Tools Speed Up) will join them on the front row.

Gardner lost an unrepresentative first lap before briefly taking up fourth with a 1:43.601s on his next tour.

It became a Marc VDS one-two at the halfway mark when an injured Sam Lowes set a 1:42.759s and was followed across the line by Fernandez with a 1:42.871s.

Marini split them in the 11th minute of the quarter-hour session and reclaimed provisional pole with a 1:42.710s on his next lap, making him the first to undercut Gardner’s combined practice benchmark of 1:42.728s.

The Australian, meanwhile, had been demoted all the way to 17th, last of those with a lap time to their name at that point, as he sat in the pits, before a 1:43.142s moved him up to 10th.

Gardner shot all the way to the top on his following lap but Di Giannantonio and championship leader Enea Bastianini (Italtrans Kalex) still had more pace up their sleeves.

The former of those two Italians improved to a 1:42.721s but remained third, while the latter elevated himself from ninth to fourth with a 1:42.722s after the chequered flag.

For Gardner, the difference was a fast final sector.

“The fourth sector has been quite positive for us all weekend,” said the 22-year-old after his final qualifying session for the Stop and Go Racing Team before a move to the KTM ranks.

“We struggled yesterday a bit in Sector 3 so we studied telemetry and the videos really hard, we managed to improve Sectors 2 and 3.

“Sector 1, we’re not the strongest yet, so hopefully in the morning (Warm Up) we can find a little bit more in Sector 1, maybe change my riding a bit through Turn 1.

“The team worked really well over the last two day, I love the track, it’s just so much fun, and I enjoy riding the bike every lap round here.

“It’s a good starting position for tomorrow, let’s see what we can do and hopefully finish back on the podium to give the team the result they deserve.”

Lowes ended up fifth as he seeks to overturn a 14-point deficit to Bastianini in the last race of the year, while the other title contender in Marco Bezzecchi (Sky Racing Team VR46 Kalex) has work to do from 12th on the grid.

There was a scary moment for Aron Canet when he crashed his Pull&Bear Aspar Speed Up exiting Turn 8 on his out lap, and had bikes flying past on either side as he slid down the descent which follows.

The Spaniard was able to remount, ride back to the pits, and ultimately set a time good enough for 15th.

Gardner’s efforts came after another Australian earned a front row start, Jack Miller qualifying third in the premier class on his Pramac Ducati.