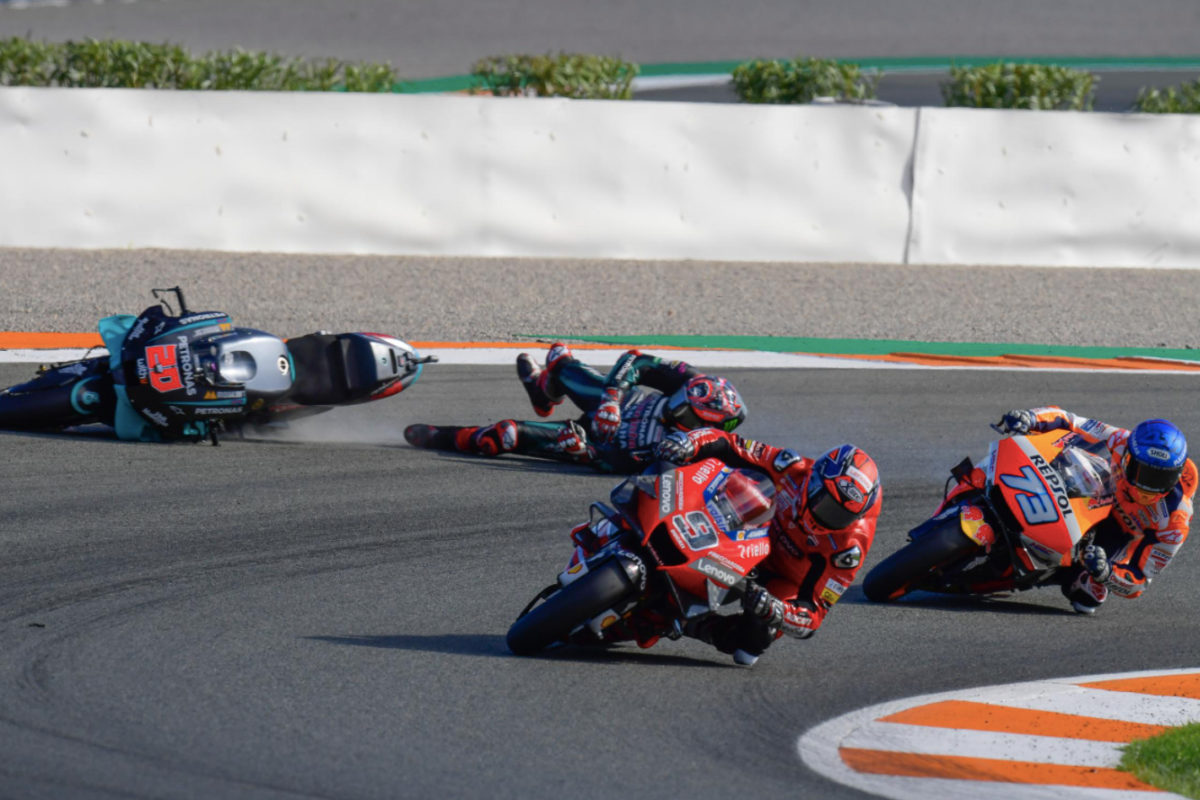 Yamaha’s MotoGP riders are at odds about whether they should revert to 2019-specification M1 machinery for 2021 amid discontent about the 2020 bike.

Regulations have been frozen for 2021 in the wake of the COVID-19 pause earlier in the year, with teams to be limited as to what they can change.

Riders cannot change engine specifications mid-season, but in Yamaha’s case, the A-spec chassis could be combined with the factory-spec engine.

However, the rules for next season state: ‘For the first event of 2021 riders will be allowed to choose between any engine or aero-body specification that the manufacturer homologated in 2020’.

Petronas Yamaha SRT’s Fabio Quartararo, who will graduate to the factory team in 2021, claimed that the 2019 ‘A-spec’ M1 used by team-mate Franco Morbidelli would have been a better option than the 2020 factory-spec bike.

It comes after Quartararo fought to upgrade to the 2020 bike for his final season with the SRT squad ahead of joining the Monster Energy Yamaha MotoGP team from 2021.

Quartararo took seven podiums on the 2019 bike in his rookie season, but hasn’t finished on the podium in 2020 away from his three victories as he conceded the title to Suzuki’s Joan Mir last weekend at Valencia.

“I’m not so happy but (the factory-spec) is the bike we wanted in the beginning of the year… we were pushing for that,” Quartararo admitted.

“That’s what helped (convince) me to sign also with the factory team was that we wanted this (2020) bike, but unfortunately for this year it was not the correct choice.

“For sure Franco also made a step because last year he made no podiums and this year he’s much more fast. So Franco improved a lot and he deserves it because I saw that he’s working in a really good way.

“But even if I won three races, I’m not so happy because I think with a more consistent bike we could fight much more and fight for much more victories.”

Maverick Viñales added: “It’s impossible (to race the 2019 bike at Portugal), because if I remember correctly you cannot change the engine spec… if we can, for sure we can change.”

Both Quartararo and Viñales tested the revised 2020 Michelin rear tyres with the 2019 Yamaha at Valencia last November, but ran with the 2020 bike this season.

However, Valencia Grand Prix winner Morbidelli insisted the latest M1 remains the logical choice for the factory riders in 2021.

The Italian rode his 2019 M1, which also features parts from the 2020 bike, to its third win of the season as Morbidelli rose to second in the points standings ahead of this weekend’s Portugal finale.

Viñales and Quartararo’s concerns were perhaps amplified by the 2020 M1’s results at Valencia, with Viñales 10th, Valentino Rossi 12th and Quartararo falling for a second time in as many weeks at the Circuit Ricardo Tormo.

Quartararo began the race equal on points with Mir’s Suzuki team-mate Alex Rins in second, but ran wide at Turn 2 on the first lap before falling from 18th place on the ninth lap. Viñales, who qualified in sixth, had dropped to 13th by the end of Lap 1 and barely recovered.

However, Morbidelli, who will remain on his current package for 2021, believes his stablemates won’t be better off swapping to the 2019 M1 for 2021, citing a greater potential margin for improvement on the new bike.

“A new bike can develop, you can work on it, you can bring modifications that the factory is working on developing. My bike is step one, I need to take out the maximum from it, from that package,” Morbidelli said.

“Of course there are some items I can pick up from the factories and adapt to my bike but I always say the latest bike is the best one because of this reason, because you can put all the energy of the factory into that package in order to make it grow and develop.

“The newest and latest has the most margin, mine has the least margin.”

Morbidelli will carry a four-point advantage over Rins to the Portimão finale this weekend, with Viñales and Quartararo 15 and 17 points down respectively.