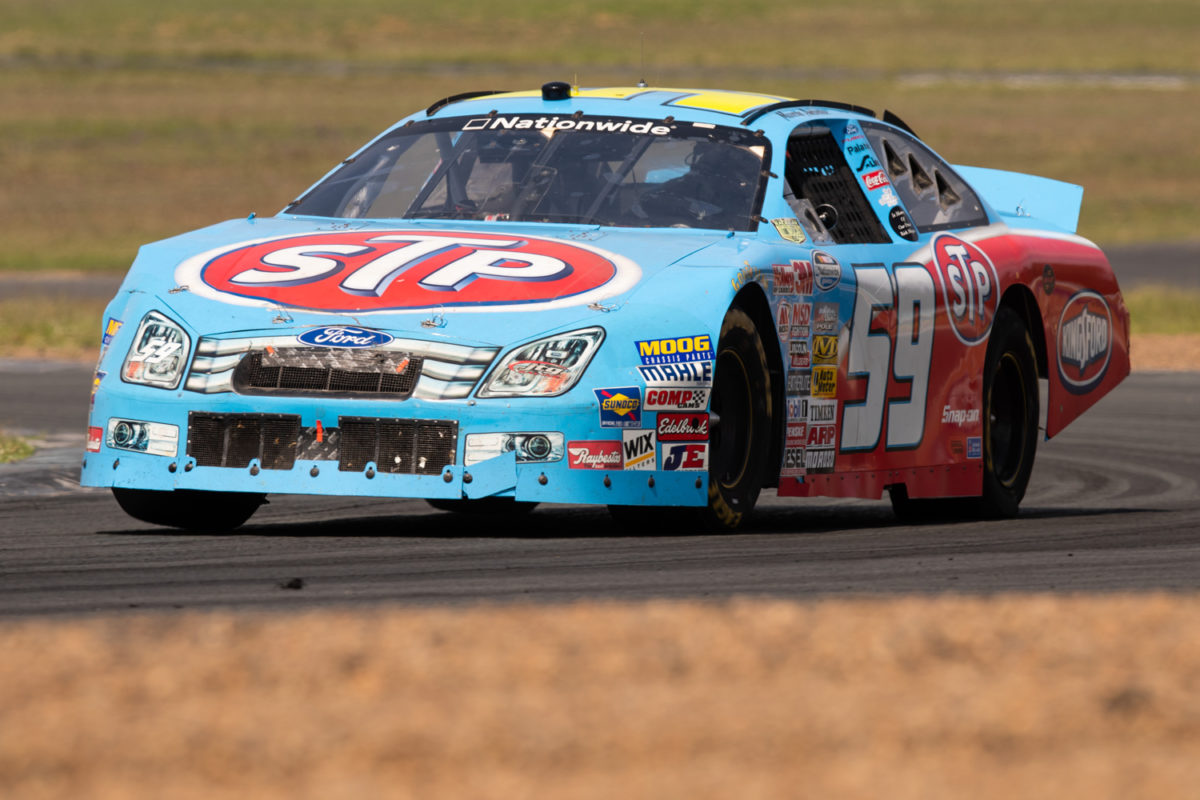 Brodie Kostecki at the wheel of Marcos Ambrose’s NASCAR winner

The Ford Fusion NASCAR with which Marcos Ambrose claimed victory at Watkins Glen in 2008 has hit Queensland Raceway.

The #59 STP Ford sat in storage in Charlotte, North Carolina for more than a decade before being mechanically rebuilt last year and shipped to Australia, with today’s outing its first since Ambrose raced it to his maiden NASCAR success.

“That was a blast,” said Kostecki.

“You forget just how loud and how cool these cars really are.

“When Crusher asked me to get involved in this project I couldn’t believe my luck. With COVID going on it is difficult to get to the US, but Crusher brought a bit of America to me.

“The car was started once after its rebuild in the US and basically it fired up straight away after a few systems checks today. We didn’t even have to charge the batteries.

“I have driven similar cars in the past, but to be given the keys today to a car with such incredible history is something pretty special.

“The really cool thing is that the car is almost identical to the way it came off the track back in 2008 with every scratch, rub, dent and bump.

“Whoever buys this rig is going to be getting a pure race car with a pedigree that can be matched by no other car.

“There will only ever be one car that was taken to NASCAR victory lane by an Australian for the first time and this is it.”

Murray added: “It was incredible to see the car out there today in the hands of Brodie.

“The way it looks, the way it sounds, it all just brought back so many memories of that inaugural victory from Marcos (Ambrose) more than 12 years ago.

“It will be sad to see it go from the collection, but I am sure the new owner will have the chance to enjoy it even more than I have.

“We have proven today that the car is in terrific shape and can be enjoyed at a decent speed with some confidence.”

Murray is currently offering the car for sale through Lloyds Auctions, with prospective buyers having until 19:00 AEDT on November 28 to place a bid.

Supercheap Auto Bathurst 1000 winner Paul Morris was also on hand for the outing, the car having been stored at his Norwell Motorplex.

“It is quite remarkable that we have this car back in Australia considering its amazing history and what Marcos (Ambrose) achieved both here and in the US,” said Morris.

“So many of the cars get cannibalised after events, but this car is how it was when it sat in victory lane.

“Whoever buys the car is getting one hell of a piece of Australian motorsport history.”

The car’s original driver, Ambrose, was offered the opportunity to take the wheel of his old steed.

However, COVID-19 restrictions prevented his attendance, though the Tasmanian was kept up to speed on how the session unfolded.

“The guys sent me some video of the first few laps directly from the track today,” said Ambrose.

“The look and the sound certainly brought back some memories.

“It would have been nice to take up Crusher’s offer to drive it today, but by all accounts Brodie did a pretty good job and I think the smile on his face said it all.”