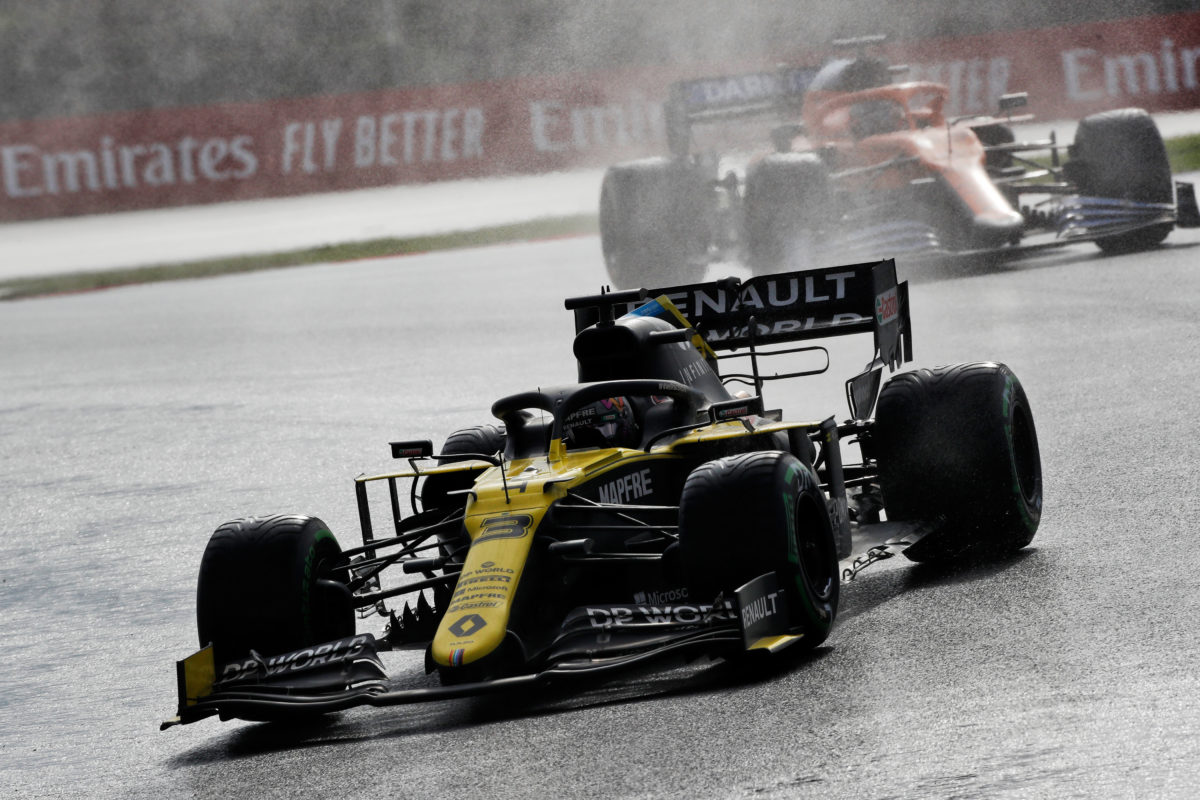 The Australian and his French team-mate, Esteban Ocon, qualified fifth and seventh respectively for Sunday’s race.

Both made strong starts to gain ground off the grid, only to make contact at the first corner, pitching Ocon into a spin.

Later in the race, Ricciardo had his own spin, though far less costly than that of his team-mate’s opening lap excursion.

“We made a great start today, but I was squashed in between Lewis (Hamilton) and Esteban into Turn 1, so I had nowhere to go and I clipped my team-mate which is the last thing you want to do,” Ricciardo explained.

“We lost a couple of positions from the incident and then when we switched to the intermediate tyres and we just couldn’t make them last.

“There were moments during the race when I was told I was one of the fastest out there, then just a few laps later my tyres were completely gone, so it was all a bit of a lottery.”

Ocon added: “I got hit twice at the start and that ended our chances of scoring good points.

“I was happy with my start and it was probably my best one of the year.

“I was third or fourth at Turn 1 and then I was unlucky to spin after Lewis got close to Daniel, who clipped my rear.

“I then got hit at Turn 9, which punctured my rear tyre and from there it was always going to be hard to recover.”

Renault had entered the Turkish Grand Prix weekend leading both Racing Point and McLaren by a single point as they battle for third place in the constructors’ championship.

With Racing Point bagging second courtesy of Sergio Perez, and ninth with Lance Stroll, it accumulated 20 points in Istanbul Park.

McLaren too made ground, with Carlos Sainz finishing fifth and Lando Norris eighth to increase the team’s tally by 15.

Ricciardo’s 10th place meant Renault added just a solitary point to its score, and has slipped from third to fifth in the championship fight as a result.

“It was unfortunate that Daniel and Esteban touched at the start.

“Daniel looked competitive in the first part of the race, but his pace significantly deteriorated after his second stop as he struggled with his tyres.

“Esteban drove a solid race to finish 11th and that was the best we could have hoped for after the first lap incidents and the lack of pace with the intermediate tyres.

“We now turn our focus to the final three races in Bahrain and Abu Dhabi where we expect to be competitive on more conventional and grippy surfaces and aim to fight back for third position in the championship.”

Formula 1’s next stop is the Sakhir circuit in Bahrain for back-to-back events as the 2020 campaign heads towards its Abu Dhabi conclusion next month.

The Bahrain Grand Prix is scheduled for November 27-29.