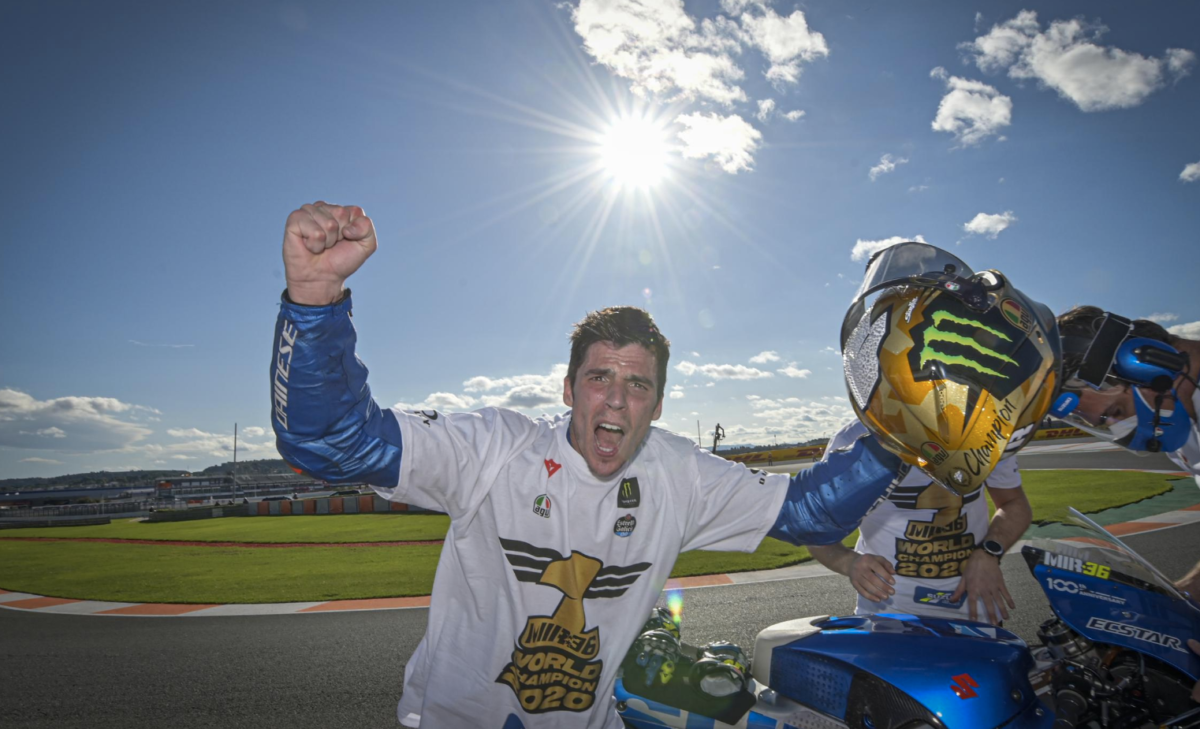 Morbidelli had led the race almost throughout before trading places with Miller three times on the final lap.

He ultimately held on to the lead when it mattered, heading his Ducati rival in a drag race to the flag.

Meanwhile, Mir finished seventh, doing enough to move the 2020 MotoGP title out of reach for anyone else.

A good start saw Miller seize the lead into the opening corner, only to overcook it and run wide to leave Morbidelli out front.

Fabio Quartararo’s championship chances were dealt a heavy blow early when he fell to 20th at Turn 2, running well wide as the field braked into the tight left-hander.

The Frenchman was trying to navigate his way forward and had to take avoiding action as the field compressed, narrowly missing Vinales in the process.

Of the title contenders, Mir was just 10th while Quartararo had climbed back to 18th.

Johann Zarco fell with 22 laps to go, losing the front end and sliding out of proceedings at Turn 1.

Race leader Morbidelli enjoyed strong pace out front, edging out to almost a second with 20 laps to run.

Quartararo’s slim title hopes came crashing down as he did, losing the front end of his Petronas Yamaha SRT Team entry.

As the race entered its final 10 laps, Miller began to turn the screws on Morbidelli out front.

The Ducati rider set the fastest lap of the race as he began chipping away at the 0.8s lead held by the Yamaha rider ahead.

The race leader responded, lifting his own pace to edge out another tenth.

With nine laps to go, Nakagami threw away his hopes of a podium as he put a move on Espargaro at Turn 14.

The Japanese rider moved inside at the final corner, losing the front end and sliding out of the race.

Miller’s challenge for the lead had not abated, closing in to 0.5s on Lap 22.

The gap continued to erode, the Ducati rider reducing Morbidelli’s advantage to 0.3s a lap later.

With two laps to run the gap between the front two was 0.2s as the Australian reeled in the Suzuki ahead.

In the slipstream as they began the final lap, Miller moved to the inside into the opening corner to hit the front, only to run wide and allow the Suzuki back through at Turn 2.

The pair swapped places again at Turn 4, only for Morbidelli to force the door open a corner later.

The Italian then held the lead to the finish, winning a drag race to the line out of the final corner.

Espargaro claimed third to complete the podium while Mir crossed the line seventh to become the the 2020 MotoGP champion-elect.