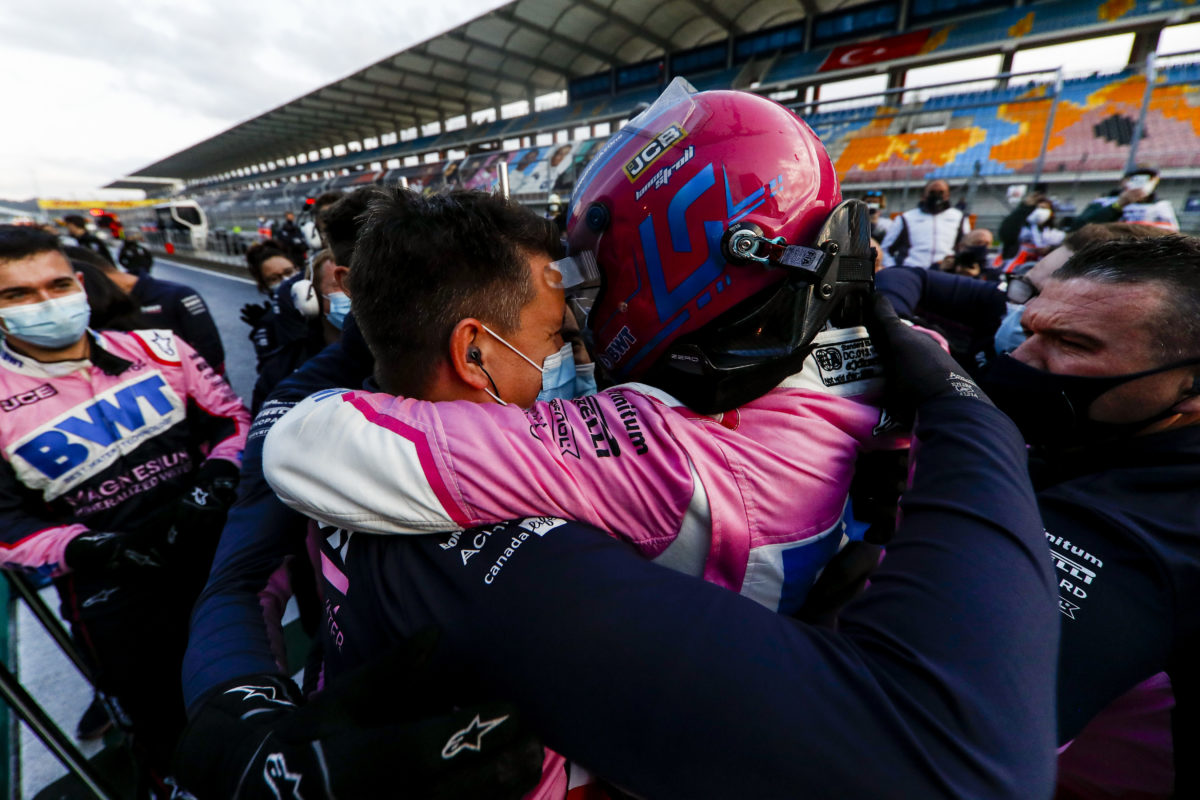 Lance Stroll celebrates with his team after taking pole position

Lance Stroll was left without the words to describe his emotions following his stunning qualifying performance that netted a career-first Formula 1 pole position in Turkey.

The Canadian shot to the top of the timing screens late in the final phase of qualifying to lay his claim to the place.

His lap then withstood a late challenge from Max Verstappen, in doing so confirming the Racing Point driver as the first Canadian on pole position since the 1997 European Grand Prix.

“I didn’t expect us to be up here after P3. There was a lot of things that we weren’t sure of coming in to qualifying. We didn’t look too competitive in P3, but I’m so happy right now.”

Qualifying was an interrupted affair with wet conditions coupled with a slippery new surface making the task of simply staying on the road far from trivial.

In the opening 18-minute phase of the session conditions deteriorated to the point where the red flag was shown.

That triggered a near 45-minute delay before proceedings resumed, only for another interruption when Romain Grosjean found the gravel at Turn 1.

From that point on, conditions firstly stabilised before improving to the point where Stroll’s team-mate, Sergio Perez felt confident to bolt on a set of intermediate tyres in Qualifying 3.

It proved an inspired decision from the Mexican which achieved two outcomes.

The first was an improvement in his own lap times, which in turn applied pressure to Red Bull such that they swapped Verstappen and Alex Albon to the shallower grooved tyres.

It was a decisive moment, as the pair then struggled to extract the same level of performance on the green-walled tyre as Perez.

Having initially headed out on wets, Stroll too made the switch before recording his pole position lap as the chequered flag flew.

“I really put that lap together at the end, I was under a lot of pressure,” he explained.

“I only had one lap to do it there at the end because we started on the wet tyre then we boxed for inters.

“I had one lap where I got traffic, sorry no, I had Valtteri (Bottas) who spun in front of me, and then I had one lap at the end to do it.

“I had the confidence in the car and I just nailed pretty much every corner and pieced it together nicely.

“I knew we were up there at the front,” he added.

“Listening to my engineer, he was giving me feedback every lap on where we were, but in these conditions you don’t really have time to think about where you are and what’s going on around you, it’s really just the next corner in front of you.

“Once I got on the inter I knew we were in good shape, and the car felt like it was pretty hooked up for these conditions anyway around here.

“To put it on pole, it’s a special moment for me, one of the biggest highlights of my career for sure.

“We dream about these moments growing up and it’s pretty special.”

Stroll will share the front row with Verstappen while Perez will line up directly behind his team-mate in third.

The Turkish Grand Prix is scheduled to commence at 21:10 AEDT.