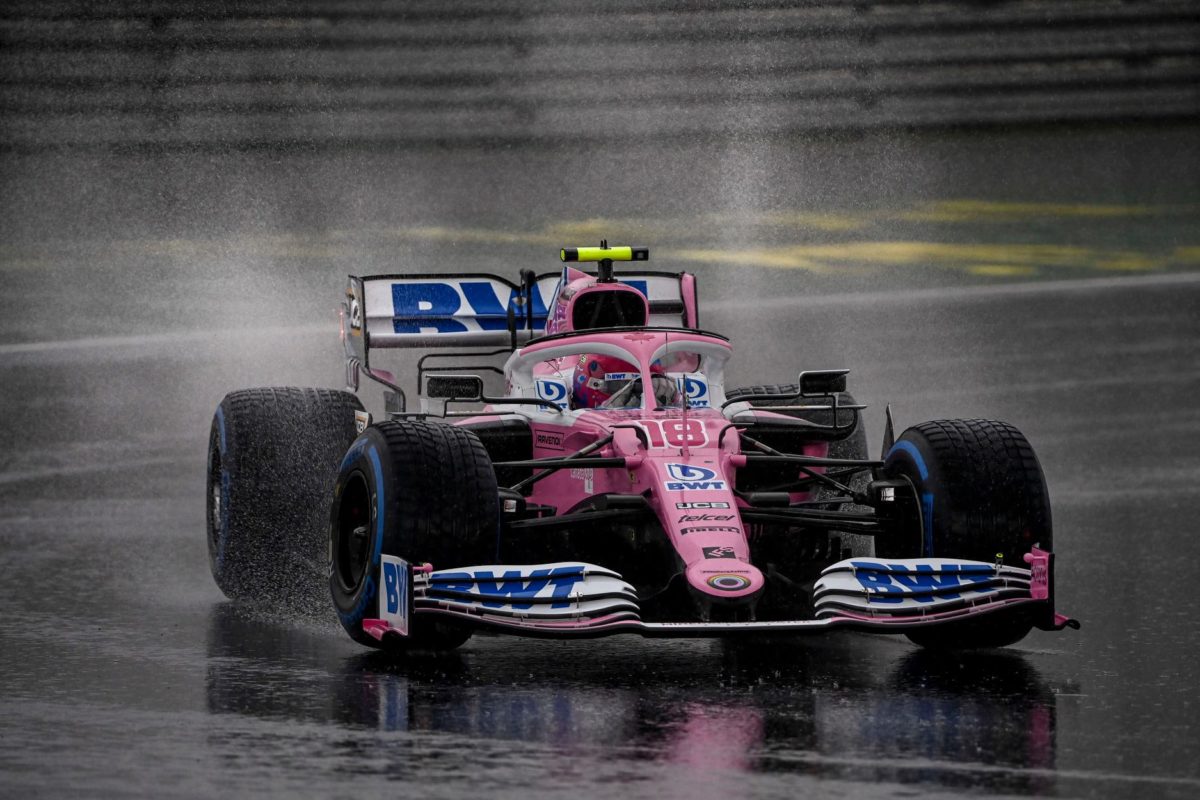 Lance Stroll has claimed a surprise pole position after a fascinating wet qualifying session for the Formula 1 Turkish Grand Prix.

Max Verstappen had dominated the session, which was twice interrupted by red flags, and looked nailed on for top spot by a comfortable margin before Racing Point forced Red Bull’s hand.

An impressive lap from Sergio Perez in Qualifying 3 on a set of intermediate tyres prompted a change of strategy for Red Bull, which had sent both Verstappen and Alex Albon out on full wets.

Unable to switch the intermediates on, Red Bull’s threat was blunted and the advantage swung in favour of Racing Point.

It looked as though it would be Perez on pole, before Stroll’s late charge saw him become the first Canadian since 1997 to claim the place.

A queue formed at pit exit as the scheduled hour-long session began, Verstappen headed the field on track as near every car joined the circuit immediately.

Verstappen and Albon headed out on intermediates, the rest of the field on full wet tyres.

There was little in the way of standing water but it was still too much for Verstappen, who straight-lined the chicane onto the back straight, half spinning as he rejoined at Turn 10.

Valtteri Bottas lowered the benchmark to a 2:07.0s to move into provisional pole, the Finn using a set of full wet tyres for his lap.

A 2:06.115s lap for Ocon moved him to the top of the timing screens as rain intensified with 10 minutes to run in the opening 18-minute phase.

Race Control then opted to stop the session with just under seven minutes to run, as an increased number of drivers began slipping off the road at pedestrian pace.

The session resumed after a 44-minute delay, with Kimi Raikkonen spinning almost immediately after exiting the lane.

It was a brief period of green flag running as Romain Grosjean beached his Haas in the gravel at Turn 1.

The Frenchman was unable to slow his car for the opening corner, spinning into the gravel and drawing the red flag with 3:30s left on the clock.

Charles Leclerc had been in the same gravel trap moments earlier, but was able to keep the Ferrari moving and clambered out the other side.

The session quickly resumed, with all remaining runners heading back out on track.

Verstappen proved to be the fastest, chipping six seconds out of the session’s best to the second split on his final flying lap.

Unsurprisingly the Dutchman went fastest with a 1:57.485s, followed by his Red Bull team-mate, Albon, though 1.9s slower.

Lance Stroll has claimed a maiden pole position after a fascinating wet qualifying session for the Formula 1 Turkish Grand Prix.Behind the pair, the order changed with almost every car across the line as the chequered flag was shown.

Lewis Hamilton was just 14th at the end of the session, his final lap time being deleted after running long at Turn 1.

With a number of drivers appearing to improve their times when double waved yellow flags were out, officials announced that all lap times set under such circumstances would be investigated post-session.

Qualifying 2 commenced as work was still being carried out to retrieve Latifi’s car; both marshals and recovery vehicles still on track.

“So why did the start the session,” quizzed a rightly confused Raikkonen.

Times were began to drop considerably versus the opening phase of the session, which had seen only the two Red Bull drivers inside the two-minute barrier.

Having banked a 1:57s initially, Stroll improved to 1:55.730s to move fastest midway through the phase, a time almost a second faster than anyone else to that point.

Verstappen then improved to 1:53.486s to shoot back to the top, Perez, Bottas, and Hamilton also banking times quicker than Stroll had managed moments earlier.

A lap later, the pace was 1:52.036s, again courtesy of Verstappen, and a whopping 1.7s quicker than second placed Bottas.

The pace was soon 1:50.293s as the Red Bull driver put on a masterclass, 1.989s quicker than Albon who’d improved to second.

As the chequered flag fell, Carlos Sainz was a casualty from the session, as was Sebastian Vettel, Norris, Leclerc, and Pierre Gasly.

It meant neither McLaren or Ferrari progressed to the final phase of the session, while Alfa Romeo had both Antonio Giovinazzi and Raikkonen in the top 10.

Rubbing salt into the wound was the fact Sainz will face the stewards after it was alleged he impeded Perez in the latter part of the session.

Qualifying 3 began with both Red Bull’s out on track with a set of full wet tyres fitted, Esteban Ocon and Perez the only ones brave enough to head out on inters.

A 1:52.326s got proceedings going for Verstappen, four seconds faster than Albon, who was running immediately behind him on track.

Perez then shot to the top with a 1:52.037s, triggering Verstappen to abort his second flying lap – which had been faster than his first effort and likely to see him reclaim provisional pole.

He boxed for a racing stop, a set of intermediates fitted to his car, as Mercedes did to both Bottas and Hamilton.

Verstappen was unable to immediately improve, complaining of a lack of grip while Perez continued to improve on his own personal best.

A 1:49.321s from the Mexican moved the barrier, with Stroll underscoring that effort with the second fastest time, albeit 2.149s off his team-mate, both on intermediate tyres.

A lap later, having fallen to third, Stroll went faster to set a 1:47.765 to take provisional pole.

It would be an effort that withstood all late challenges, Verstappen forced to settle for second in a session he and Red Bull had to that point dominated.

Perez will line up third and Albon fourth, while world championship leader Hamilton could do no better than sixth, and Bottas ninth.

Daniel Ricciardo had a quiet session for Renault but set the fifth fastest time, with Ocon seventh ahead of Raikkonen.

How representative the session proves with regards to the grid remains unclear, with a number of drivers now set to have their Qualifying 1 times looked into.

That could see the order for Sunday’s race, which is scheduled to get underway at 21:10 AEDT, rather different to that set by qualifying.