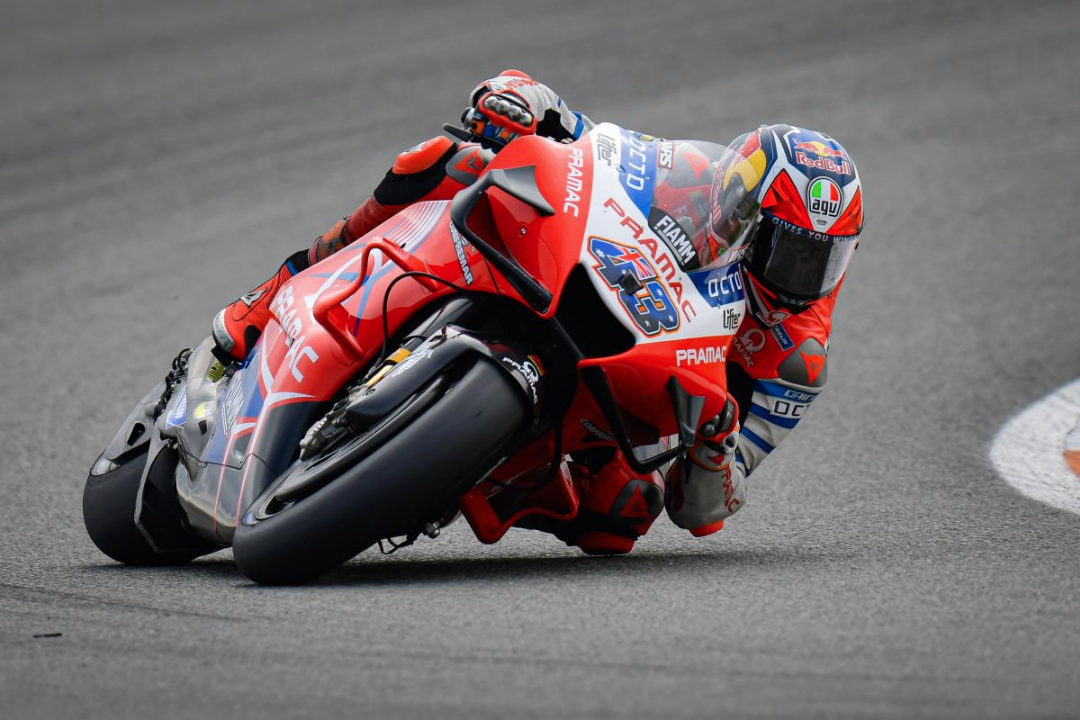 Jack Miller will start the Valencia MotoGP second after missing out on pole position by less than a tenth of a second to Franco Morbidelli.

The Australian Ducati rider recorded a 1:30.287 to put himself on provisional pole before the Petronas SRT Yamaha rider improved by 0.096s to steal the spot away.

Meanwhile championship leader Joan Mir will line up 12th, one spot behind Fabio Quartararo in 11th while title contender Alex Rins could do no better than 14th.

That was quickly bested by Quartararo who piloted his satellite Yamaha fastest by half a tenth before trading top spot with Morbidelli to bring the provisional pole time down to 1:30.983s.

Having progressed from Q1, Brad Binder recorded 1:30.763 to stake his claim for pole on the KTM, holding the spot until the 12-minute marker of the session when Vinales improved.

Miller’s time came later in the session, his 1:30.287s moving him 0.4s clear of the field before Morbidelli’s hammer blow at the end.

Joining them on the front row is Takaaki Nakagami, while Binder slipped to ninth on the grid by session’s end.

Valentino Rossi will line up just 16th, alongside Andrea Dovizioso in 17th, while factory Honda rider Alex Marquez will start from the middle of the back row.

The Spaniard had a heavy fall after highsiding early in Q1, though was able to walk away and rejoin the session on a second bike later in proceedings.

With the event marking the penultimate round of the championship, Mir could mathematically wrap up the title after Sunday’s race.

The Spaniard holds a 37-point lead over Quartararo and Rins heading into the 27-lap affair, with only those three remaining in title contention.

Should his advantage be 26 points or greater at the conclusion of the Vaneicia MotoGP, Mir would become the 2020 MotoGP champion-elect.