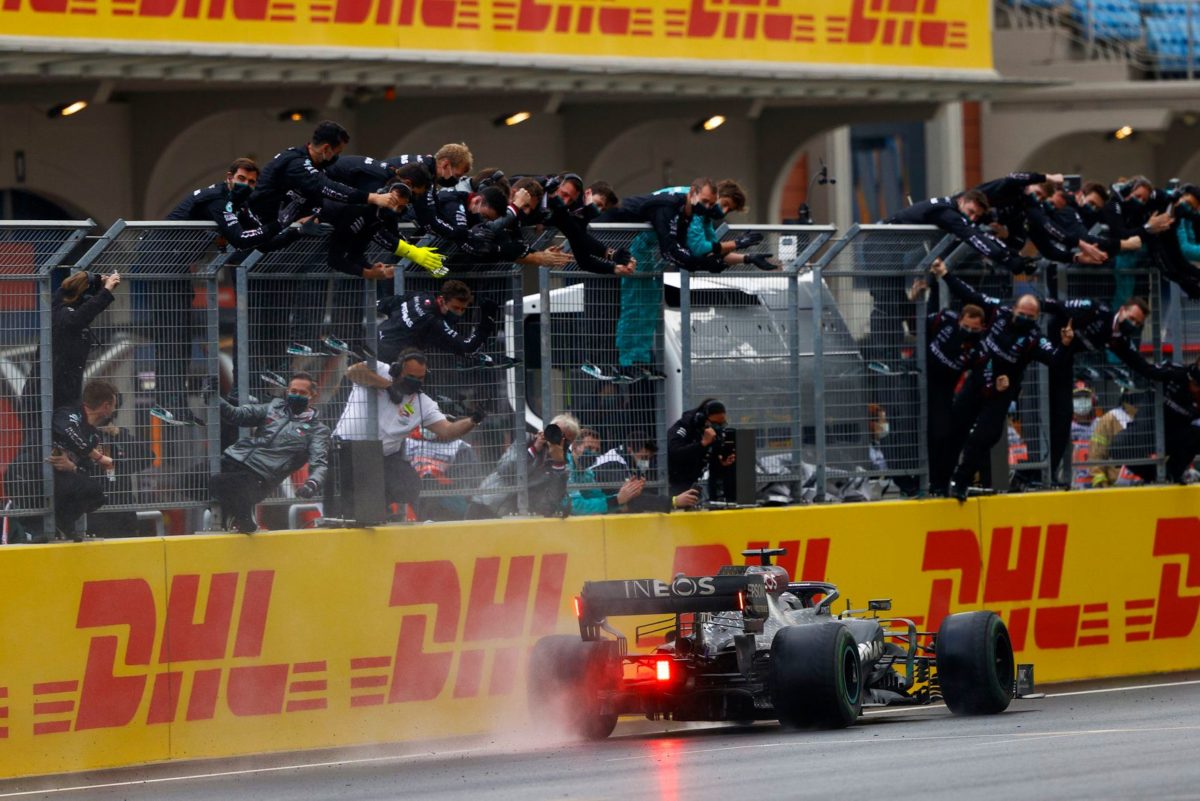 Hamilton drove a faultless race in difficult wet conditions to rise from sixth to win the race with ease from Sergio Perez and Sebastian Vettel.

The Mercedes driver had it far from all his own way, making progress off the start only to find himself battling with Vettel in the early stages.

At one point he was more than a pit stop off the race lead, before a dominant drive in the second half of the race saw him win by more than half a minute.

Lance Stroll headed the field from the start, Max Verstappen scrambling for grip in second as he found himself engulfed by the field.

That saw Perez rise to second to give Racing Point a one-two into the opening corner, as Esteban Ocon and Valtteri Bottas found themselves pointing the wrong way.

Contact between the two Renault’s saw Ocon spin while Bottas went around in sympathy, the pair then coming together later on the opening lap.

From sixth on the grid, Hamilton rose to third before a mistake at Turn 9 opened the door for Vettel to take the place.

Out front, Stroll quickly established a five second lead over team-mate Perez, with Vettel more than 10 seconds away from the front of the race after just two laps.

The Ferrari driver had Verstappen tucked up underneath his rear wing, though the wet conditions meant he was unable to pull out of line in an effort to make a move on the German.

At the end of Lap 6, Charles Leclerc took to the lane and swapped from full wet tyres to intermediate rubber.

With the exception of the two Williams, who’d started from the pit lane on the green-walled tyres, he was the first to make the switch to the shallower grooved option.

Stuck in 15th, Bottas asked his pit wall to try something different, and subsequently boxed at the end of Lap 7.

His move came as times began to tumble, with the cross over point for intermediate tyres appearing to have been reached.

Vettel pitted from third after eight laps, followed by Hamilton, the pair rejoining in seventh and eighth respectively.

Released from behind Vettel, Verstappen immediately lifted his pace as race leader Stroll was instructed to head to the lane.

The Canadian rejoined in fourth place just as a 1:49s lap from Leclerc demonstrated the pace available on intermediate tyres.

Verstappen, however, was capable of similar pace on the full wet, and remained on track.

Perez had a slow stop when he pitted at the start of Lap 11.

In sixth, Hamilton banked a 1:45s lap, three seconds quicker than Verstappen was capable of as the intermediates began to win the argument over tyre supremacy.

Unsurprisingly, Verstappen stopped at the end of Lap 11, rejoining in fourth place ahead of Vettel.

Albon was the last of the leaders to stop, pitting next time around to fall from the lead to sixth behind the Vettel/Hamilton scrap.

On Lap 13, the Virtual Safety Car was introduced when Antonio Giovonazzi pulled off the circuit to retire from the event on the run between Turn 8 and 9.

The interruption lasted for a lap and a half, Vettel coming immediately under intense pressure from Hamilton as racing resumed.

They were quickly joined by Albon to make for a three-way battle, the Thai driver picking his way by Hamilton after the Mercedes driver locked up at the end of the back straight on Lap 16.

The Red Bull driver then found a way by Vettel at Turn 7 and cleared off, the Ferrari driver’s mirrors again filled by Hamilton.

Up the road, Perez had Verstappen for company as they began battling for second place, eight seconds behind race leader Stroll.

A better run out of Turn 10 offered Verstappen a chance to attack, only to run wide through the kink at Turn 11 and loop the Red Bull.

He pitted immediately, having already fallen behind Albon, Vettel, and Hamilton to slide to sixth, which became eighth once he resumed.

Albon in the sister car set fastest lap, 1:42.325s, as he made rapid progress towards Perez, who in turn had closed in on Stroll by a second.

After 23 laps, Albon found himself locked on to the rear wing of Perez.

Renewed pace from Vettel saw the Ferrari driver then begin moving towards that battle, dragging Hamilton with him to create the prospect of a four-car pack as the race reached half distance.

On Lap 30, DRS was enabled for the first time in the race.

By then, Albon had slipped off the back of Perez, the gap between the pair opening out to 3.5s.

By that point, improving conditions had encouraged teams to gamble on the track drying sufficiently to switch to slick tyres later in the race, wrestling with worn intermediates in the interim.

Leclerc’s strategy netted dividends and triggered another wave of stops; Ricciardo, Vettel, and Sainz all taking to the lane soon after.

Third placed Albon spun at Turn 4 on Lap 34, handing the place to Hamilton, the Red Bull driver stopping at the end of the lap for another set of intermediate tyres.

He rejoined behind Vettel in sixth place with 23 laps to run.

Out front, the race had begun to condense once more, with Perez closing to within a second of Stroll while Hamilton loitered just three seconds back.

On Lap 36, Kevin Magnussen stopped exiting the pits, before being pushed back into the lane with a suspected loose front wheel.

At the end of Lap 36, Racing Point pitted Stroll as they looked to cover off those who’d already fitted a second set of intermediate tyres.

The pole sitter rejoined in fourth, crucially emerging ahead of Vettel in fifth.

Perez took over in the lead, with Hamilton having closed up on the Mexican, promptly driving by him down the back straight courtesy of DRS to hand the Mercedes driver the lead.

Despite the loss of track position and apparent pace of those who had stopped, neither Hamilton nor Perez took to the lane as they ended the lap.

The Englishman quickly built a five second advantage while former leader Stroll found himself embroiled with Vettel, Leclerc, and Albon.

Stroll had tried a move up the inside of Vettel at the end of the back straight, but ran long and opened the door for the Ferrari driver to maintain fourth, and Leclerc easy passage into fifth.

A lap later, Leclerc eased by Vettel on approach to Turn 12, the two Prancing Horses finding strong pace in the drying conditions.

Stroll’s slip continued, falling behind first Albon and then Sainz as he dropped to eighth.

On Lap 43, Hamilton had built a 14.2s lead over Perez as he cruised up to lap Bottas, who was running in 13th at the time.

It had been a torrid performance from the Finn, with a series of spins following the dramas which befell him on the opening lap.

Leclerc moved into the podium places at the end of Lap 43 while Verstappen headed to the lane for a fresh set of tyres.

The Dutchman’s day too had unravelled somewhat following his spin while battling with Perez.

He was also under investigation for potentially crossing the pit exit line, a matter which would be heard post-race.

Ricciardo spun at the end of Lap 48 while battling with Norris for ninth place.

The Australian locked the rears into Turn 12, swapping ends and handing the spot to the McLaren driver.

A late threat of rain and a pit stop in his pocket, Mercedes looked to pit Hamilton at the end of Lap 56.

Having run his tyres for much of the race, the intermediate rubber had been worn down to slicks.

Predicted to arrive on the final lap, heavy rain was forecast, creating concerns that the race leader would have no grip at the climax of the race.

Hamilton overruled his team, staying out on track with a comfortable 26s lead over Perez, who held 2.5s clear of Leclerc.

The rain never arrived, and as a result Hamilton started the final lap with six world titles to his name, and ended it with seven.

The battle for second was only resolved three corners from home after a dramatic final lap.

Leclerc had capitalised on a mistake from Perez at Turn 10, only to run wide at Turn 12 and allow the Racing Point back through.

Vettel was also able to scramble by and demote his team-mate from the podium, narrowly losing out to Perez  in the drag race to the line for second.

Leclerc was fourth from Sainz, Verstappen, Albon, Norris, Stroll, and Ricciardo rounded out the top 10.

Second for Racing Point, and points for Stroll, means it now holds a clear third place in the championship, five points ahead of McLaren.

Renault, which had headed both those two by a point heading into the weekend, has slipped to fifth and now trails Racing point by 18 points with three races remaining.

It also has Ferrari looming just six points in arrears after third and fourth placed finishes for Vettel and Leclerc.

Formula 1 next heads to Bahrain, where it will host the next two events of the season, the first of those slated for the November 27-30 weekend.