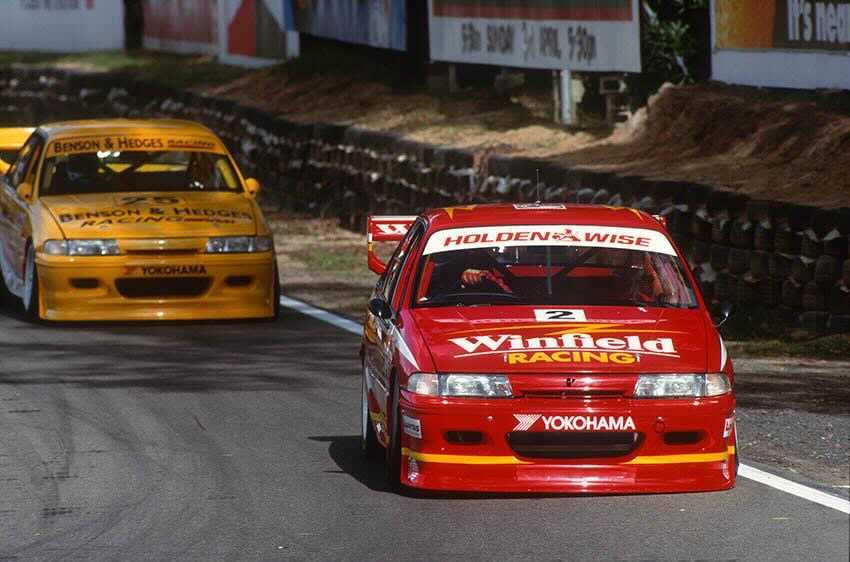 Mark Skaife was public enemy number one after the 1992 Bathurst 1000. Two years later he was Holden’s favourite son, but it nearly wasn’t to be.

That year the race ended short of its scheduled 161 laps after a late deluge ultimately saw the red flag fly after 145 laps.

The result was wound back to Lap 143, crowning then race leaders Skaife and co-driver Jim Richards winners despite their car lying in ruins on Conrod Straight in a mess of crashed cars.

The infamous “pack of arseholes” comment from Richards followed with the youngster from Gosford at his side.

Victory came at a time when the team was gearing up to switch manufacturer allegiances with the dawn of what would become the V8 Supercar era in the mid-1990s.

“It was a very political time in Australian Motorsport because there’d been times through that Group A regulatory period where certain cars had dominated,” Skaife explained.

“Obviously the BMWs were very strong. The Volvo was strong. Then the Sierra dominated. And then obviously the GT-R arrived and it was the best mousetrap.

“There was a lot of car company involvement in those days in terms of the politics and how it was administered. Really, it wasn’t very long after that the car was effectively totally banned.

“They changed the regulations at the end of 1992 to become what is now the Supercar series as a V8 series, starting in 1993.

“We knew the regulations were coming and we knew that we had to make big decisions.”

It was a strong case for Gibson to go with the blue oval, but Skaife believed otherwise.

He felt that a move to Ford would be to Gibson Motorsport’s detriment with Dick Johnson’s Shell Racing Team and Glenn Seton’s Peter Jackson Racing both running the Ford EB Falcon.

“We were close to going to Ford because Fred was very close with them,” said Skaife.

“He was a Ford driver in a previous era, and Rothmans, who was our sponsor of the day, had a couple thousand company cars with Ford.

“At that point, we were very close to going to Ford. And I encouraged Fred to not go with them because Dick Johnson’s team had already built Falcons and so had Glenn Seton’s team.

“I thought we would be third in the pecking order and we were on the back foot. I thought that TWR would have done a better job at the amalgamation of those new cars as is the Commodore versus the Falcon.”

Despite a desire to go with Ford, Gibson was swayed by the then two-time Bathurst 1000 winner and the late Robert McEniry, Holden’s Director of Sales and Marketing at the time.

“When I was negotiating, Fred and I were very keen to get the best deal from one of the car companies to go to either Ford or Holden, we sat in a meeting in Holden’s boardroom with all the Holden heavyweights. I didn’t say anything. I let Fred do all the talking,” said Skaife.

“At the end, Rob McEniry said to me, ‘Young man, I’ve seen you ride the ups and downs of this meeting.’ He said, ‘Well, what would you like to do?’ And I said, ‘Rob, it’s very simple. I just want to win the races’.”

The team’s first season as a Holden outfit saw Skaife finish sixth in the Australian Touring Car Championship with a car he described as “very ordinary”.

However, by the end of 1993, the New South Welshman felt the team was coming into its own again and back to the form it had found with Nissan.

In what was a year of building, a second straight Bathurst 1000 winner alluded Skaife and Richards, who finished runner-up to Larry Perkins and Gregg Hansford.

“In 1993 when we almost won Bathurst and through the course of that year, won plenty of races, you could be a privateer and have the same car we had. That’s how much of a customer base thing we were because it was so late and it was such an urgency requirement for us to just to get on track.

“By the time we were doing all our own diff housing, all the stuff, by that stage, it was then a Gibson car. And it proved to be the lead Holden.”

Skaife went on to win the 1994 Australian Touring Car Championship for Holden, bringing the marque its first championship win since 1980 when Peter Brock won in a VB Commodore.

That win, he said, paved the way to cement him in Holden’s racing folklore.

“I spent one year in a Holden and then the next year we won the championship. So, that sort of righted itself,” Skaife said of redeeming himself with the public after the 1992 controversy.

“As soon as I won the championship, he sent me a great poster with, ‘I just want to win races, well done mate.’ So, it was a fitting tribute to the Holden staff given they’d been out of the winner’s circle for such a long time.”

The five-time Supercars champion said the period between 1992 to 1994 from being the factory Nissan team to starting from scratch with its Holden programme was a tumultuous era.

“You think about that task for a racing team; not having one single component, not one single bit went on that next car, not one bit,” Skaife explained.

“We turned a factory Nissan team into a semi factory Holden team in a couple of months. And in one year we won the championship for them.

“So, the workload, the level of effort that everybody put in at Gibson’s of the day, it was the Triple Eight of the industry in those days.

“God, it was a good race team. We had roughly 40 people. We were funded. Well run. Fred was on top of his game. The personnel were outstanding.

“If you think about it from just a sporting prowess perspective, it’s bloody hard to take yourself out of one car, one complete arena, and then take yourself into another one and then in a relatively short period of time, in 12 to 18 months become the lead team again.

“I probably got a bit of a reality check of what sport was like, meaning there’s ups and downs.

“Us losing Nissan, for instance, was massive. And then to hook up with Holden, it made a massive difference to me, obviously, because then it became a long term arrangement with Holden. And I was loyal to them to the end.”