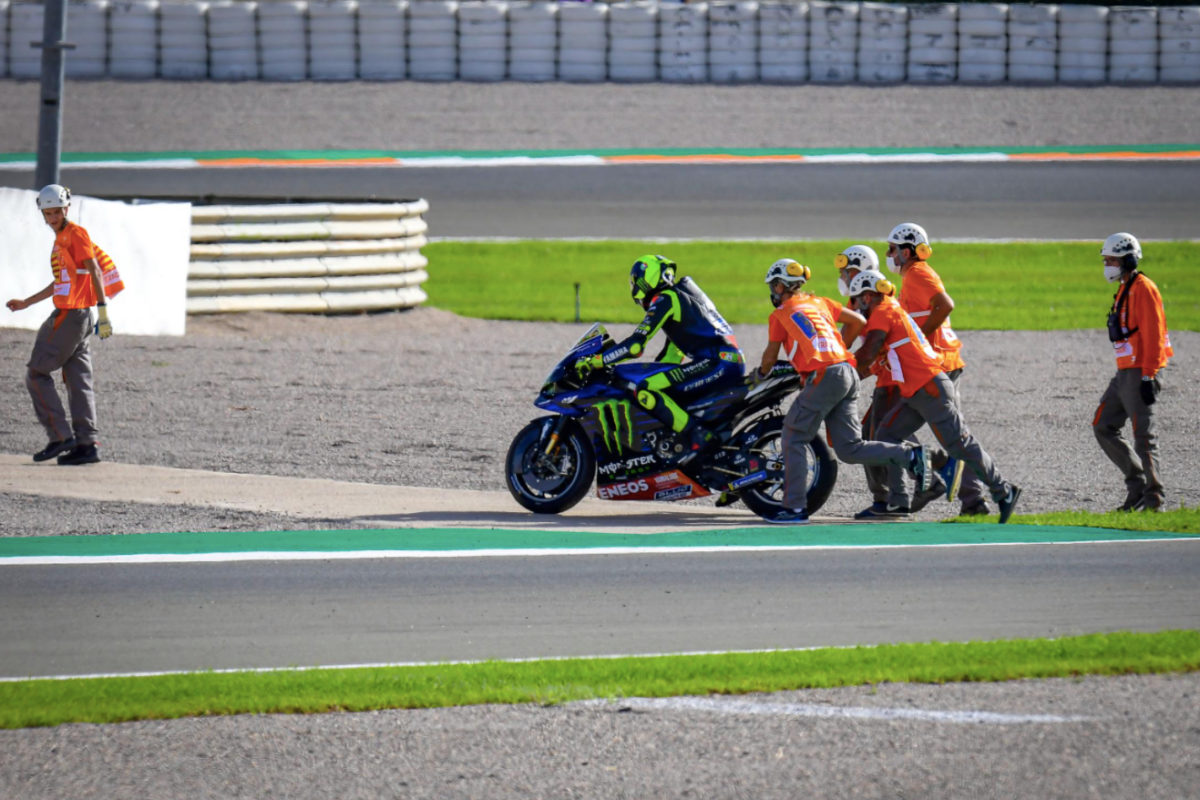 Valentino Rossi and Fabio Quartararo have lamented Yamaha’s poor reliability after the manufacturer suffered its worst weekend of the MotoGP season, and its worst in 13 years.

As Suzuki strengthened its grasp on all three titles following Joan Mir’s victory in the European Grand Prix at Valencia, no Yamaha featured in the top 10 on Sunday on a nightmare outing for the manufacturer.

On Thursday, FIM stewards penalised Yamaha for using illegal engines at the season-opening Spanish Grand Prix. The next day, one of Maverick Viñales’ pit crew tested positive for COVID-19, forcing that crew member and four others to go into quarantine.

An extra engine change forced Viñales to start from the pit lane, factory team-mate Rossi’s bike broke down on Lap 5, leaving Petronas Yamaha SRT’s Franco Morbidelli the best of the quartet in 11th after teammate Quartararo fell on Lap 1.

It was the first time since Valencia 2007 that Yamaha had finished a race without a single rider in the top ten, and with two rounds remaining, former championship leader Quartararo has slumped to 37 points behind Mir, who is chasing Suzuki’s first premier class title in 20 years.

Viñales and Morbidelli are 41 and 45 points down respectively with 50 points up for grabs.

In the constructors’ championship, Suzuki holds a seven-point lead over Ducati with Yamaha 25 points down.

The sight of Rossi stopping on the circuit headlined Yamaha’s dramas, and the veteran Italian was frustrated over the M1’s inconsistency.

“It’s incredible because last week a Yamaha won, with Franco, but here in Valencia we’re struggling very much with the grip,” explained Rossi, who missed the previous two races following a positive COVID-19 test.

“It’s a difficult situation, also for the engine because we have reliability problems. So it’s not a great weekend. They have to try to understand the way to improve.”

Yamaha and Quartararo began the season with consecutive wins in Jerez, and the manufacturer’s six MotoGP wins in 2020 matches the total of its rivals combined (two each for Suzuki, Ducati and KTM).

However, week-to-week inconsistency has led to Yamaha staring down the barrel of defeat in the riders’, teams’ and constructors’ world championships.

Rossi suggested Yamaha hasn’t made any strides forward, while its rivals have built on their own form as the season has progressed.

“We are fast at the beginning of the season and afterwards looks like the other manufacturers bring a lot of new things, so they need some races to fix, and by the end of the championship they are very strong,” the nine-time world champion said.

“But this year it depends also race-by-race because last week Franco won, but here in Valencia it was difficult for all the Yamahas.

“The engine is a big problem for us because we are always slowest in the straight, but at the same time we have reliability problems. We have a lot of problems to finish the season with five engines.

“So we don’t have performance and also we don’t have enough reliability… now it looks like the other engines are more smooth in acceleration than us.”

Quartararo, who fell on the opening lap, added: “The bike is totally different to last year and I’ve never felt like this bike is mine.

“Even when we achieve great races I never felt that good on the bike like I did last year… that’s my feeling. There’s something missing, so we are not comfortable on the bike.”

The championship will resume at the Circuit Ricardo Tormo this weekend for the Valencia Grand Prix.