Mir on brink of championship after first race win

Mir on brink of championship after first race win 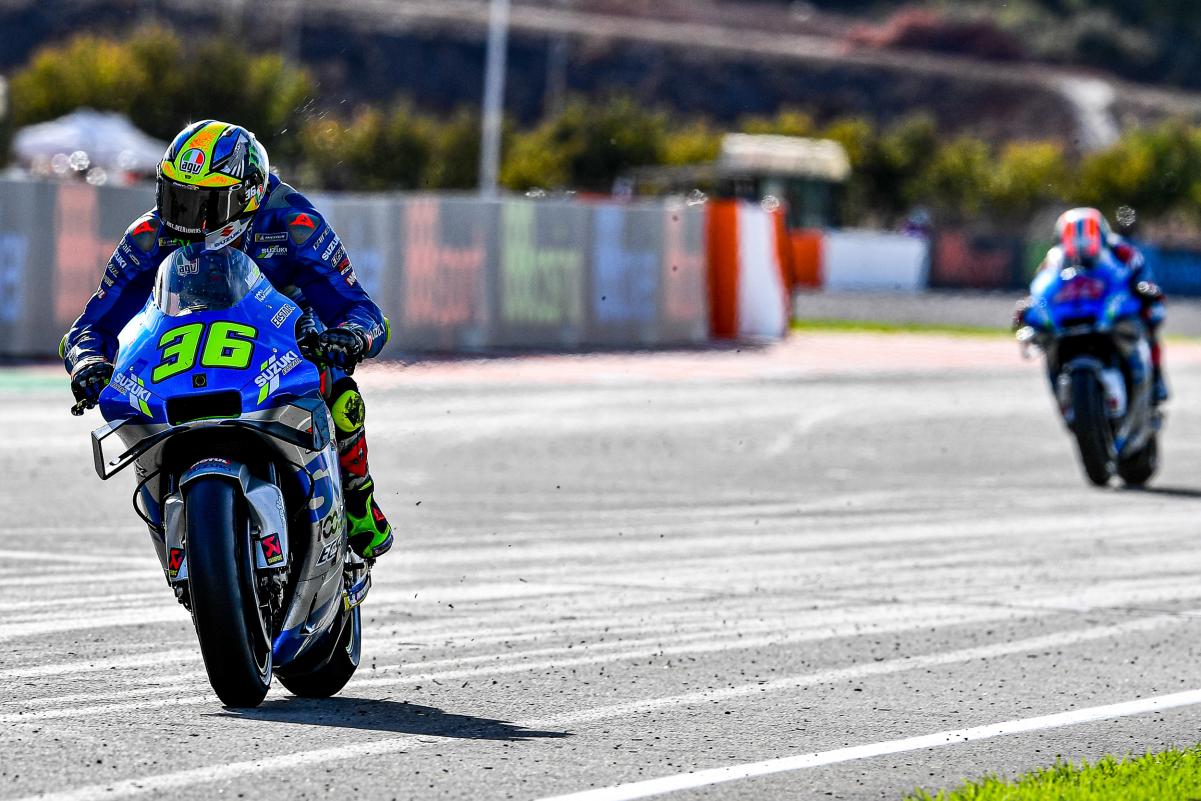 Joan Mir is more than a round clear atop the MotoGP championship after taking a career-first race win in a Suzuki one-two at Valencia.

Alex Rins finished second having held the lead for most of the first 17 laps of the European Grand Prix, while pole-sitter Pol Espargaro ended up third on his factory Red Bull KTM.

Takaaki Nakagami took fourth, ahead of Miguel Oliveira and Jack Miller, the latter of whom ran as low as 11th in the early stages of the dry, 27-lap affair.

Those results mean Mir’s championship lead has blown out to 37 points, with Quartararo second on the table and only two races to go.

As Lap 1 became Lap 2, Oliveira moved into fourth when he passed Nakagami on the main straight, while Quartararo had remounted and was circulating in 20th.

The Suzuki Ecstar riders found Turn 11 to their liking, Rins taking the lead there on Lap 2 and Mir going past Pol Espargaro to move into second spot two laps later.

Pol Espargaro drifted to almost a second behind the Suzukis before closing back up as proceedings moved beyond Lap 10, by which time Miller was ahead of Morbidelli (Petronas SRT Yamaha) and into seventh.

Nakagami had continued to run in fifth spot until he reclaimed a position from Oliveira at the final corner on Lap 15, with the podium then almost two seconds away.

Mir had stuck with Rins and pounced when his team-mate left a gap at Turn 11 on Lap 17, then quickly stretched his advantage to 0.657s with the new fastest lap on Lap 19.

Miller was back to where he started when he got Johann Zarco (Esponsorama Ducati) for sixth at Turn 1 on Lap 20, although they had traded places again by the time they were next back to the main straight.

With five laps remaining, Mir’s lead was over a second for the first time, as Miller passed Dovizioso for good.

At the front, the contest was also over, and #36 could cruise to the chequered flag after starting the final lap with a 1.4s buffer.

Rins’ second placing takes him to third in the championship, behind Quartararo only on a countback, and Pol Espargaro was never outside the top three all afternoon.

Behind Nakagami, Oliveira, and Miller at the end was Brad Binder (Red Bull KTM Factory), despite an early long lap as punishment for taking the #43 Ducati out last round.

Rounding out the top 10 were Dovizioso, Zarco, and Danilo Petrucci (Ducati Team), with the other finishers being Morbidelli, Stefan Bradl (Repsol Honda), Viñales (Monster Energy Yamaha), and Quartararo, respectively.

Marquez was among those who did not make the chequered flag, crashing at Turn 1 moments after being passed for eighth by Dovizioso with four laps remaining and nearly taking the Italian with him.

Valentino Rossi was an early retirement with a suspected fuel pump problem for his Monster Energy Yamaha.

MotoGP is back at Valencia this coming weekend for the penultimate round of the season.