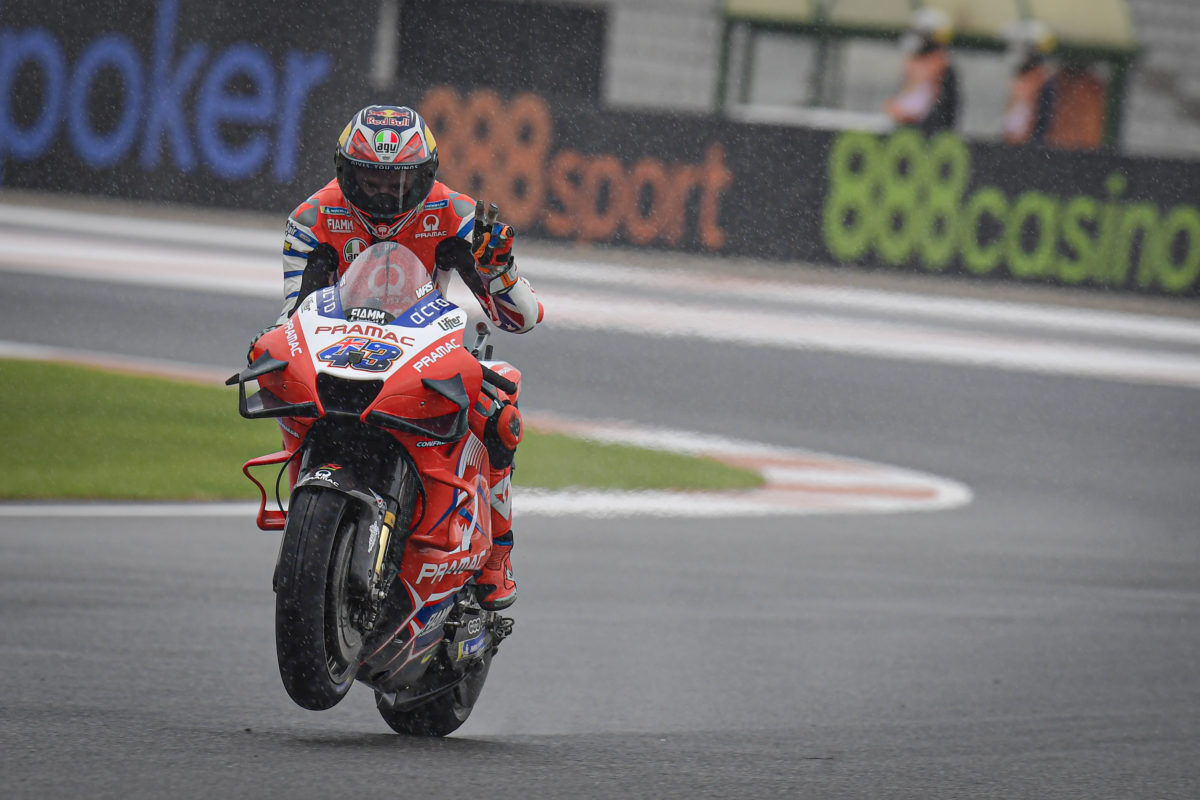 Jack Miller hopes Sunday’s race is dry despite being clearly fastest in a wet opening practice and staying on top on a drying track at the European Grand Prix.

On the first of two straight weekends in Valencia, the Queenslander clocked a 1:42.063s on wets in Free Practice 1 which put him 0.467s up on the field.

With an obvious dry line on the Circuit Ricardo Tormo for Free Practice 2, Miller snatched first position by 0.092s with a 1:32.528s at the end of the piece.

“I hope it’ll be a dry Sunday and we can have a good race with everybody involved,” said the Pramac Ducati rider, who is regarded as one of the better wet weather competitors.

“The feeling is quite good at the moment. Valencia, I really enjoy a lot, this circuit, and our bike seems to work well here.

“When we have good grip like we have here, it makes it a lot easier, so we will see now for tomorrow and Sunday.

“But anyway, a good way to start the weekend, we’re starting it on a positive note, and we’ll try to continue that momentum into tomorrow and the next day.”

The 2016 Dutch TT winner, in wet conditions, admitted that his opening day at the European Grand Prix was nevertheless not perfect, but was productive.

Asked what he had been working on to be almost half a second faster than second position in FP1, Miller responded, “Nothing, I was just doing laps in the wet.

“I had a good feeling immediately, very comfortable, and just working on set-up, of course.

“This afternoon as well, just trying to understand how the bike’s going to behave in the dry.

“Found a few little issues with our set-up, but at least we have the right direction to try and work, we understand; just normal things with the position of the bike and stuff like that, but nothing major.”

With the threat of more rain for Free Practice 3, championship leader Joan Mir finished 10th in the latter Friday session and therefore occupies the same spot on combined times, granting the #36 Suzuki direct passage to Qualifying 2 as it stands.

Of the other title contenders, SRT team-mates Franco Morbidelli and Fabio Quartararo were third and ninth respectively, while factory Yamaha counterpart Maverick Viñales ended up 11th.

The latter faces a pit lane start anyway, due to having to use a sixth engine this season.