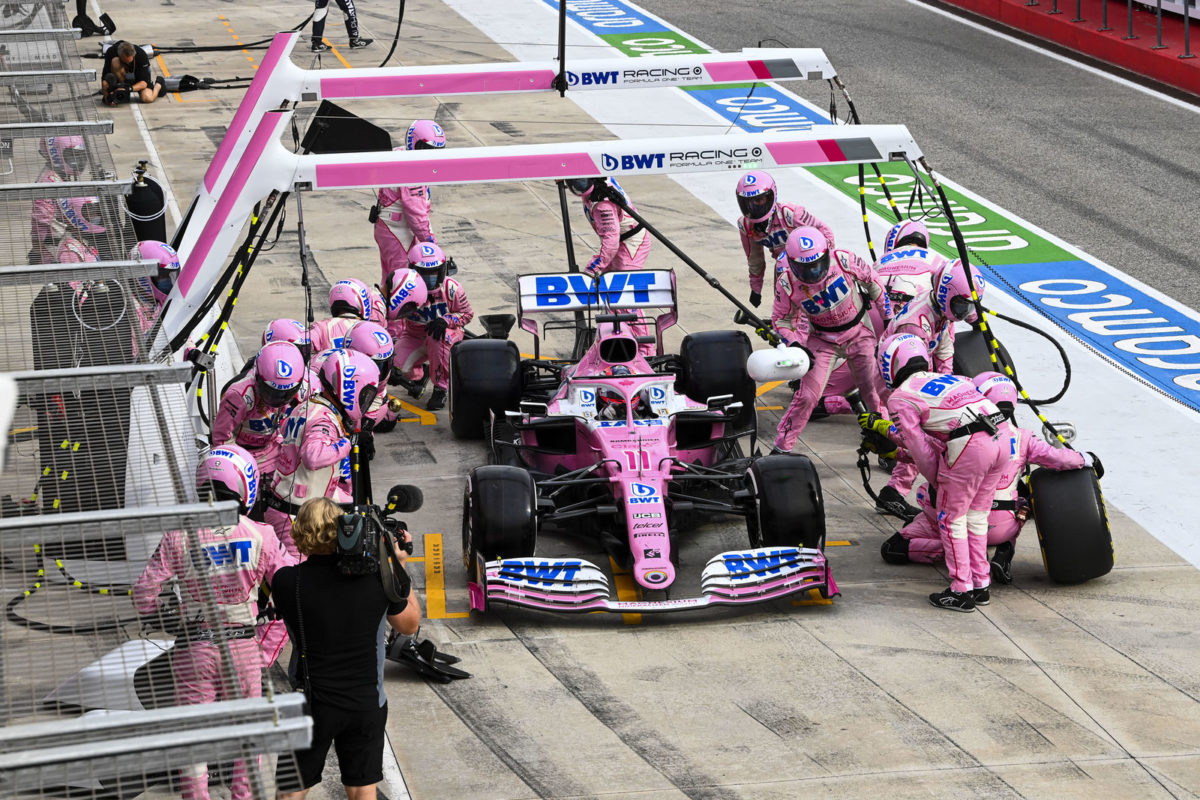 Sergio Perez is serviced during the Emilia Romagna Grand Prix

Racing Point’s Andy Green says that the late Sergio Perez pit stop which handed third place at Imola to Daniel Ricciardo was the right call at the time.

Perez had inherited third position when Max Verstappen’s Red Bull blew a tyre and spun, an incident which drew the Safety Car.

Instead of holding onto precious track position for the run home, the Mexican was called into the lane to exchange his hard compound tyres for softs.

He dropped to sixth and ultimately finished in the same spot, while Ricciardo bagged a second podium for Renault, two rounds after the first.

Speaking shortly after the race, Perez stated, “it is a painful day, you know, and also a painful day in the championship. Our competition… we basically gave the podium to Ricciardo.”

The outgoing Racing Point driver had hauled his way from 11th on the grid to fourth before the Safety Car with a relatively long stint on medium compound tyres before switching to hard rubber.

For that reason, says Green, it was decided that the better option was to go to soft tyres for a restart.

“It could have gone the other way,” explained the Racing Point Technical Director.

“The race was going our way completely up until the Safety Car.

“Checo (Perez) had manoeuvred himself with great pace up to fourth, overtook the pack by going longer on the medium tyres, he drove really well, the car was really strong.

“We were very happy with where it was going and the worst possible scenario was a Safety Car. That was not really how we were geared up, unfortunately.

“It was always going to be a difficult decision, that one. We were on the hard tyres, the car had been set up quite specifically for the long runs and for the race we were incredibly nervous about having to restart the hard tyres behind the Safety Car and I think we would have struggled.

“So, the safest thing to do – and we thought the most logical thing to do – was to swap him for a set of the new softer tyres so we didn’t have to worry about that.

“We thought other people might do the same but a lot depends on how they were set up for the race and I think it probably just showed where our race pace was because we’d set the car up to look after the tyres and be kind and not overheat them.

“So, we were always going to struggle behind a Safety Car in that situation.”

Perez’s misfortune was exacerbated when the Safety Car period ran longer than expected due to George Russell’s separate crash.

Green admitted that, had the team known then what it does now, it would have left Car #11 out but maintained that its decision was best at the time.

“Then you get other things with the second incident behind the Safety Car which we couldn’t have predicted, so the number of laps remaining to overtake was shortened again by a considerably margin so that worked against us,” he added.

“Hindsight, we would have made a different decision but I think at the time with the information we had that’s the decision we came to.”

Russell looped his Williams into the fence between Piratella and Acque Minerali, an incident which has attracted further attention after it emerged that at least Lance Stroll passed marshals at high speed as they were still cleaning up debris.