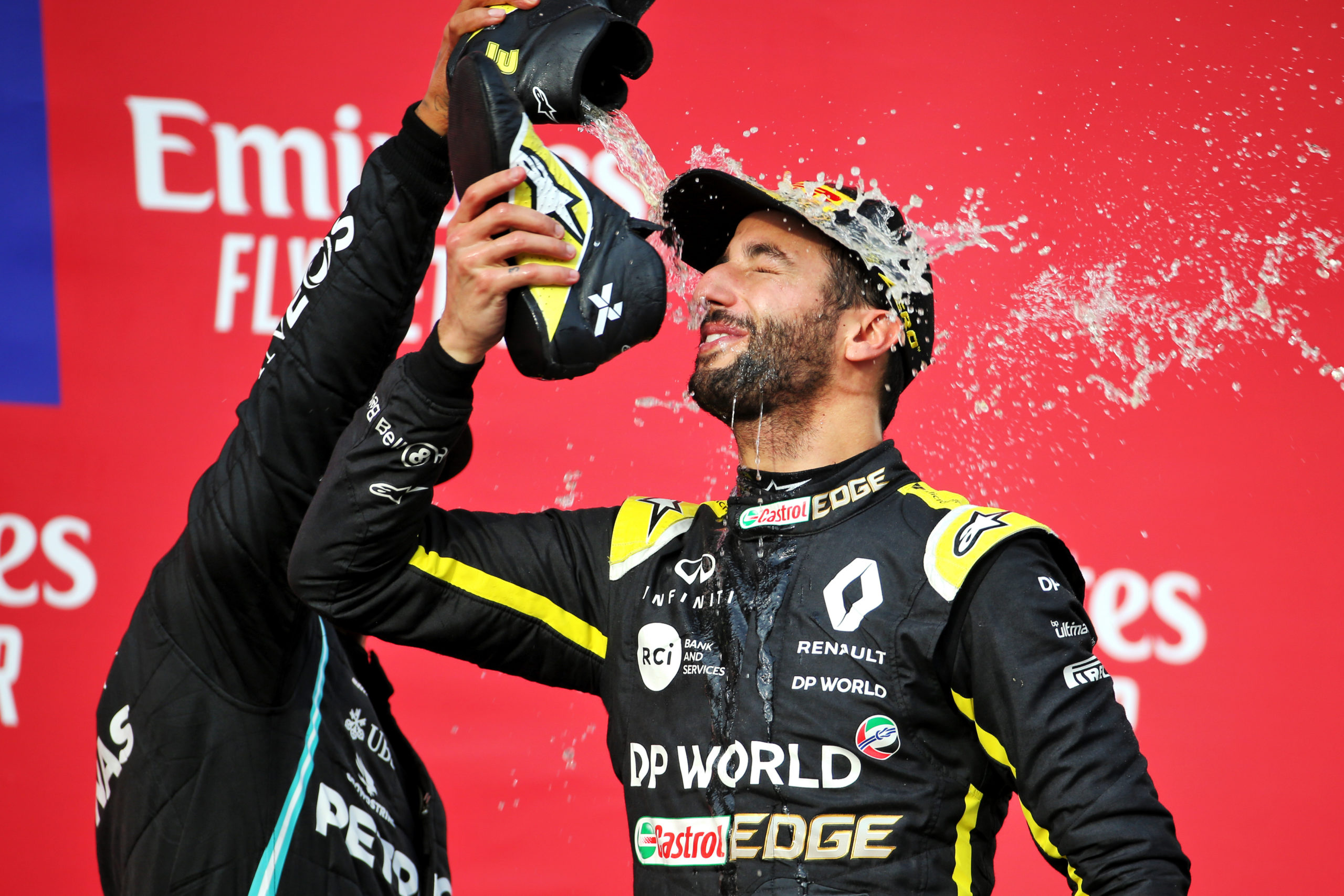 Daniel Ricciardo says he didn’t expect to finish third in the Emilia Romagna Grand Prix after a late race Safety Car propelled him to third and saw shoey celebrations return.

The Renault racer made a good getaway from fifth on the grid to demote AlphaTauri pilot Pierre Gasly to fourth into the Tamburello chicane.

From there, Ricciardo fell away from the trio at the front led by Valtteri Bottas (Mercedes), Max Verstappen (Red Bull), and Lewis Hamilton (Mercedes).

The Perth pilot’s race was stifled midway through when an off-strategy Kevin Magnussen (Haas) held him up.

That allowed Racing Point’s Sergio Perez to leapfrog the midpack, climbing seven places to be fourth once the pit stop sequence had been cleansed.

Ricciardo lay fifth at the point when Verstappen suffered a puncture and brought out the Safety Car late in proceedings.

Perez was promoted to third and Ricciardo to fourth. However, under the control of the Safety Car, Perez pitted and ceded position to Ricciardo.

As a result, the Australian moved into third, a position he would hold until the end of the race while Perez could only climb back to sixth.

“I was honestly surprised that he boxed,” said Ricciardo.

“He was quicker than us today, that’s the truth. I was like, ‘if he stays out, with the same car, same tyres, he should hold on to third’. I was very surprised he boxed.

“The team asked how my tyres were, I said I was happy. I think that was enough for them to keep me out.

“I was more happy to go out, let’s say swinging, and if Perez came through and passed me then that’s what we would’ve been anyway. Definitely the right call.”

It’s only the second podium for Ricciardo with Renault, but comes just two grands prix after his first success with the team at the Eifel Grand Prix at the Nurburgring.

His return to the podium in Germany was without his trademark ‘shoey’ celebrations.

However, it made a return to the podium in Italy, Ricciardo sharing a shoey with six-time world champion Lewis Hamilton.

“I think they’ll be dancing (in Australia) because I didn’t forget this time; the shoey,” said Ricciardo.

“On that, I was about to drink a beautiful fresh one, and I heard Lewis saying, ‘take your other shoe off’, and I was like, ‘no’, because honestly, I think it was three years ago on the podium, he goes ‘I’ll never ever do that. I’ll never drink it. You can offer me, you can force me, I’ll never do it.’ He even asked for it today.

Ricciardo, who made a bet with his Team Principal Cyrik Abiteboul to get a tattoo should he get a podium in 2020, quashed suggestions a second inking might be forthcoming.

“I’ll tell you what, before he said congratulations, he said, ‘don’t even think about getting me two tattoos.’ it’s just going to be one,” Ricciardo laughed.

Formula 1 moves on to Istanbul Park for the Turkish Grand Prix on November 13-15.