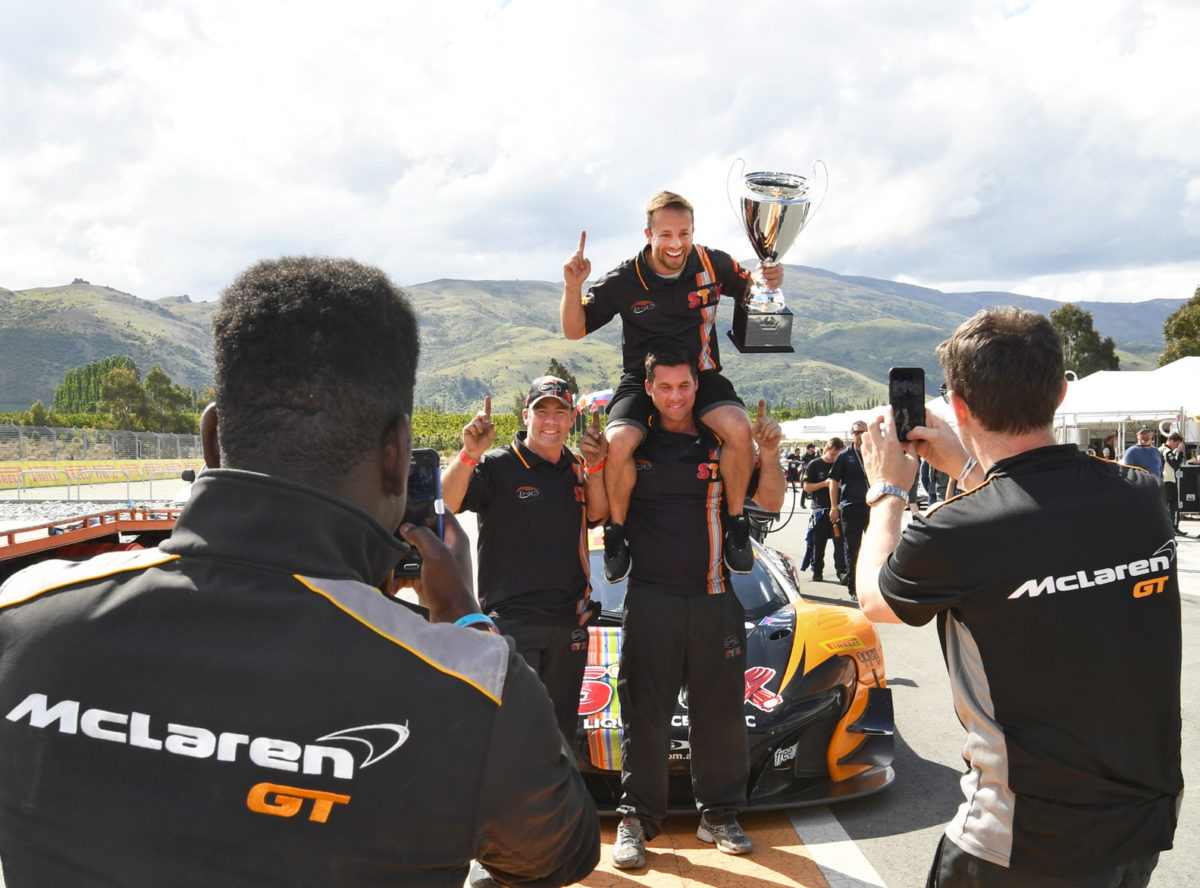 There is little doubt that motorsport has taken a beating in 2020 as a result of the pandemic, but while most will think of the impact on teams and drivers, there’s an industry behind it which is suffering.

Behind the curtain of Australian motorsport stands a small army of contractors whose primary source of income has all but dried up. It could be a dire tale of woe, but talking to Jason Dunstan, you’d never know it.

Haling from Melbourne, Dunstan is something of a gun for hire; a accomplished and experienced motor racing mechanic who has been playing his trade for the better part of two decades. He works for himself, with some steady repeat business and other ad hoc requests. Yet, the man everyone in the paddock knows simply as ‘Racey’ keeps smiling.

“I am so lucky, I’m like the luckiest victim of circumstance you would ever know,” he told Speedcafe.com, his enthusiasm for the sport pouring out with every word.

“I often think back and I’m very grateful for the opportunities that’ve come my way.

“I’ve got to work on a lot of different cars. I still talk to the state level guys about doing work at that level. You can never work on enough stuff.”

The son of a panel beater, Racey’s childhood was spent at Sandown in the late 1970s. There he met his heroes, Allan Moffat, Murray Carter, and Peter Brock. His childhood was comparatively ordinary, playing football (though not very well, he laughs) and spending time with friends, but it was the impression left by those weekends at Sandown that would prove instrumental in the direction his life would go.

“As soon as I got enough money, I started building my own cars and went rallying and sprint racing and club sprints and stuff like that,” he said.

“It just went on from there. It’s something I’ve always wanted to do, but you wish and hope one day that you get the opportunity.”

He became a mechanic almost by default. There was no formal training, just hours spent working on cars and absorbing anything and everything he could. It’s a mentality he’s carried with him to this day.

“That’s why it’s the only reason I got into being a motor mechanic, is so I could work on race cars, or one day hopefully work on a race car,” he admitted.

“The bloke I was living next door, he decided he wanted to go Improved Production Racing.

“He could drive, but didn’t know much about cars, so he thought, ‘oh, do you want me want to come and do this motor racing thing?’ I said, ‘oh yeah, that’d be good’.”

Through that relationship Racey met Rohan Ambrose, whom he describes as ‘Rotary King’.

“Working alongside Rohan Ambrose with the car owner which included a few late nights, cold pizza and no pay, but who cares,” Racey quizzed.

“I was working on a race car and being taught the fundamentals of race car prep by one of improved production’s front running teams at the time.”

It was the first of a series of relationships he has formed over the years which have proved instrumental.

“I’ve always been a big believer in every situation and opportunity to better yourself, even today,” he explained.

“And you sort of look because you have an interest in it, but you remember, you go, I saw that happen somewhere before. And you adapt it to the way you work.”

His big break came when, while working as workshop manager for a Honda dealership in Melbourne, he crossed parks with Mark Cravino who at that time was running cars in the Australian GT Production Car Championship. Soon after he found his way to Fitzgerald Racing where he remained until 2013 when he set out on a solo career.

More than a decade on from that decision, and though work has slowed in 2020, Racey remains filled with enthusiasm and passion for the sport as he was when he began swinging spanners on his neighbour’s RX7.

“I never thought it would last this long for me, honestly,” he conceded.

“I didn’t really have any preconceived expectations, to be honest with you. It’s just something that I’m trying to keep continually evolving.

“You’ve got to keep evolving with what’s around you at the time.

“All you have to do is be the guy that someone goes, yeah, get Racey he’ll get it done; you don’t have to be a superstar, you just have to be that safe pair of hands.

“It’s when the proverbial hits the fan, when you’ve got an issue and there ain’t much time; the good guys, there’s no yelling, there’s never any yelling,” he added.

“That’s such a cool environment to work in. I love that.

“That’s when you know you’re in a really good team, when there’s no yelling, it’s all calm.

“That’s what I find and that’s where my enjoyment for it comes as well.”

Over the years there has been a healthy helping of success, though his fondest memory came at Highlands in 2016 with Klark Quinn.

With a record-breaking third Australian GT Championship on the line heading into the final round, Quinn found himself battling with Nathan Morcom for the title.

“Mate, that was the best for me because I knew Klark wasn’t coming back,” he recalled.

Contact between Morcom and Quinn left them both down the order for the final race, before they charged forward in a dramatic climax to the year.

“I will tell you I cried, I’m not ashamed to admit it,” Racey admitted.

“I thought we were done and I knew Clark wasn’t coming back the next year, I knew this was it for him.

“And Nathan’s splitter had come dislodged because he and Klark were racing from the back.

“Those two guys had another hundred horsepower on the whole field, it was awesome.

“But then Nathan’s car goes, the splitter, and he started to fall back from Klark, and all Klark had to do was make it, I cried.

“The reason for the tears running down my face was the prospect of Klark becoming the first 3-time winner of that championship. It meant a lot to me to be a part of that.

“Everyone I’ve worked for has been good,” he continued.

“I was very forever fortunate for those guys to have me along for that ride.

“Good people, good bunch of blokes, and taught me a lot. 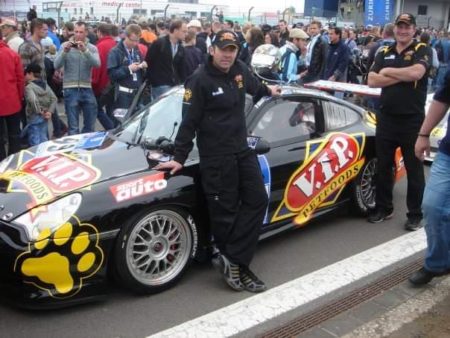 “Mikey Flynn who works at DJR, he come on board to run the headset for Klark.

“And Harry (Forrester); unbelievable. He would sit and he’d point out things you haven’t even seen.

“You can’t not help but learn from these guys.

“That’s what I like. That’s my biggest joy doing the whole motor racing thing. It’s the guys I work with.”

Business has continued to turnover in 2020, though his grand plans were curtailed early in the piece.

That included an extended jaunt through Europe, taking in the Creventic 24 Hour Series, with an outing at the Dubai 24 Hour before the pandemic took hold.

It would have seen a continuation of a career that has already seen a healthy helping of international events.

Racey has worked at the Nurburgring 24 Hour, and Daytona 24, not to mention endurance events in Asia.

Following Dubai, there were plans to head to Germany to prepare the car ahead of a visit to the infamous Spa-Francorchamps.

“The guys who owned the car picked the guys out of a Creventic series,” Racey said.

Then COVID took hold, and those plans fell in a heap.

But for Racey, there’s no dwelling on what might have been, and he’s already looking forward to get back out to a race track.

“Mostly race car related, which I’m lucky that, being a contractor, you’re always trying to build on the relationships that you’ve got and try develop new ones going forward.

“It’s a tough industry just to have two or three sources of work. 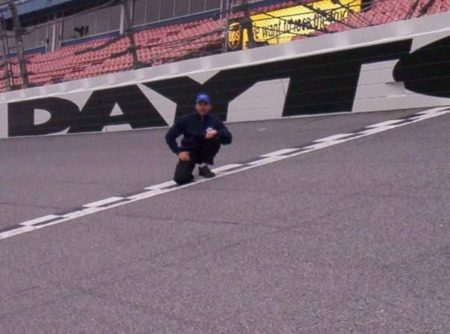 On the start line at the Daytona 24 Hour

“I would engage anybody, if they want me to come and have a look at a car and I’ll make the time, it’s just like a good business practice.

“It may not come up in the end, but you’ve still got to give that situation the opportunity to develop into something that could be something good going forward.

“And I enjoy that. I enjoy the hope of something coming off, putting in a bit of groundwork.

“I don’t mind picking up the phone, ringing somebody, saying, ‘oh, I’m available’.

“I’ll go drop in the workshop and I’ll see them, ‘Ever need a hand mate?’

“What goes around, comes around. It’s worked well for me so far.”