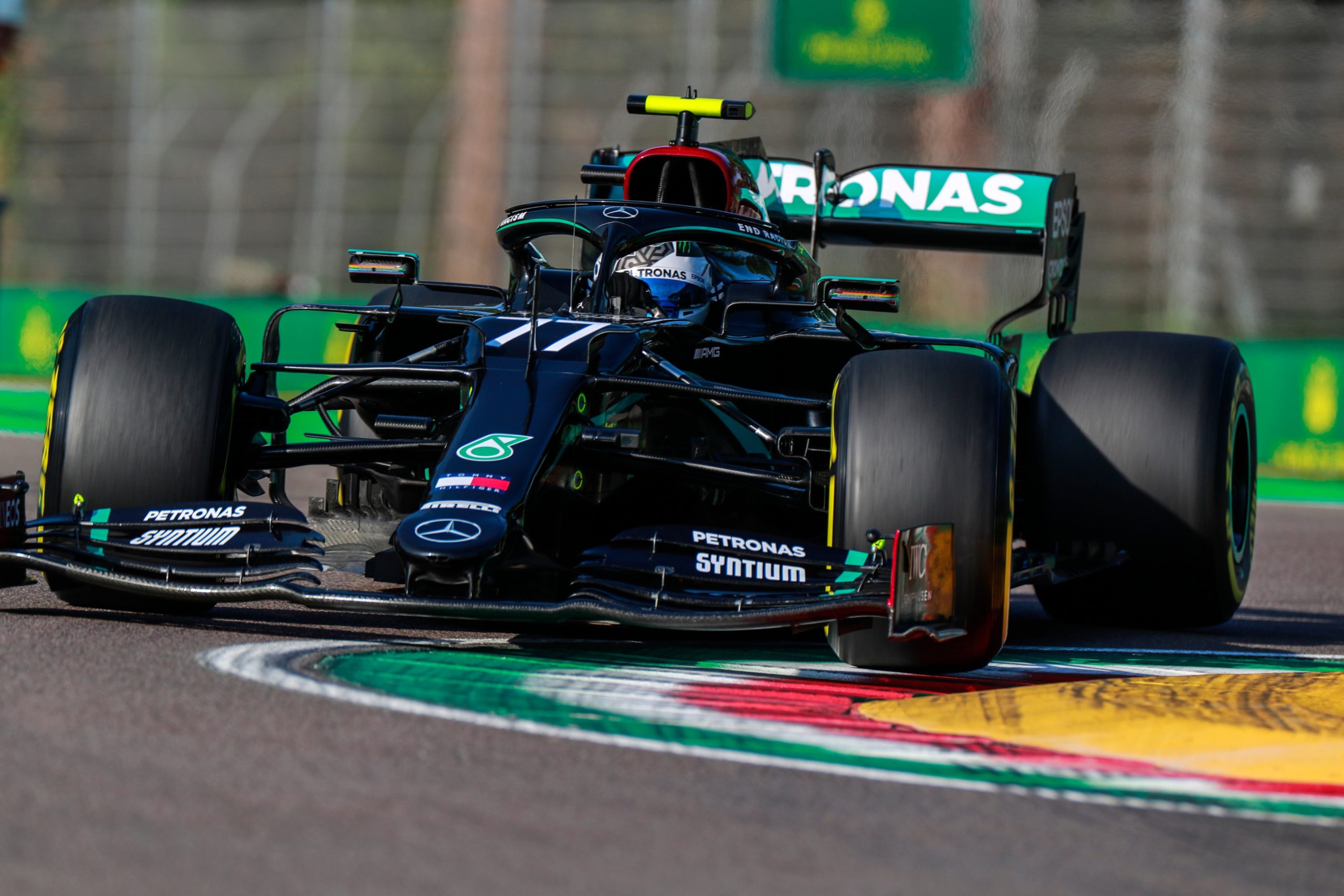 As has become customary in Formula 1 this year, the Silver Arrows will line up alongside each other with Red Bull’s Max Verstappen behind them in third.

The Dutch driver will have former team-mate Pierre Gasly alongside him in fourth in what was the Frenchman’s equal career-best performance in qualifying.

“I really enjoyed this track when you push flat out, it’s beautiful,” said Bottas.

“I knew I had to improve in the last lap and I found those small gains that we needed and it’s a great feeling when you get those and I definitely had the shakes after. It’s good fun.

Asked where he found the time to beat Hamilton, Bottas replied, “For me, the Turn 2, 3, that’s something I was really working on today and I only got there at the end.

“The last couple of corners as well I struggled when I tried to risk and go for it.

“I struggled with instability of the car. I knew in the last lap I had to try, so I risked the car. It just managed to turn in nicely and it was good.”

The opening phase of qualifying saw both Haas drivers Romain Grosjean and Kevin Magnussen fail to make it through from Q1 and into Q2 in 16th and 17th respectively.

Kimi Raikkonen of Alfa Romeo had his fastest flying lap deleted, relegating him to 18th.

George Russell (Williams) continued his strong run of qualifying form, clocking the fastest first sector. However, he would not be able to make it through to Q3.

Verstappen was forced to abandon his first flying lap with a spark plug issue. The team quickly resolved the problem and had the Dutchman back out with just a few minutes to spare.

Bottas then went quickest on a 1:14.585s and was followed closely by Hamilton who sat 0.058s adrift.

Having already used an extra set of tyres to make it through from Q1 into Q2, Albon’s day was made harder when he spun at the Variante Alta chicane, narrowly missing the outside wall.

That necessitated another set of tyres, this time opting for the softest of the three available compounds to make it through to Q3.

Vettel looked to be struggling and was unable to better his benchmark on his final flying lap to stay 12th. Meanwhile, team-mate Charles Leclerc climbed from 10th to fourth with his last effort.

Verstappen cracked the top 10 with his sole flying lap on the medium compound tyre, which took him to fourth behind Gasly. Albon, on soft tyres, quickly beat that to be fourth fastest at the session’s end.

Hamilton was fastest to begin with on a 1:13.781s, but dropped a wheel off at the final corner. Bottas duly slotted in behind on a 1:13.812s with his first effort.

After the first run it was Hamilton from Bottas, Verstappen, Gasly, Albon, Leclerc, Norris, Kvyat, Ricciardo, and Sainz.

Albon was dropped to the back of the top 10, however, for exceeding track limits at Turn 9, Piratella.

With three and a half minutes remaining the drivers started rolling out for their final flying laps.

The battle between the Mercedes saw Bottas edge out Hamilton in every sector.

The six-time world champion bettered his benchmark on a 1:13.706s, but was bested by Bottas who clocked a 1:13.609s with his final effort to snag pole position.

Verstappen stayed third despite improving his fastest time and was followed by Ricciardo, though the Renault driver was demoted late in the session by Gasly.

At the end of play, it was Bottas from Hamilton, Verstappen and Gasly. Fifth was Ricciardo followed by Albon, Leclerc, Kvyat, Norris, and Sainz.