Hunter McElrea has finished off his rookie Indy Pro 2000 season with a maiden win in the series, at St Petersburg.

McElrea sat third in the 17th and final race of the season when Sting Ray Robb (Juncos Racing) outbraked himself upon an early restart, allowing the New Zealander and Colin Kaminsky through.

Kaminsky then also ran wide, at Turn 2, leaving him vulnerable to his Pabst Racing team-mate.

McElrea duly took the lead at Turn 4 and while he could not shake Kaminsky, the 2018 Australian Formula Ford champion ultimately won by 0.6s.

Robb, who had already wrapped up the Indy Pro 2000 title with an event to spare, finished the Round 17 race in fifth after collecting an all-the-way win in the weekend opener.

McElrea challenged Artem Petrov (Juncos Racing) for third in that encounter before finishing two seconds away from the podium in fourth, a result which helped him to fifth in the standings at season’s end.

Spring Training for the 2021 Road to Indy campaign will be held on the Homestead-Miami road course on February 22-24 (local time). 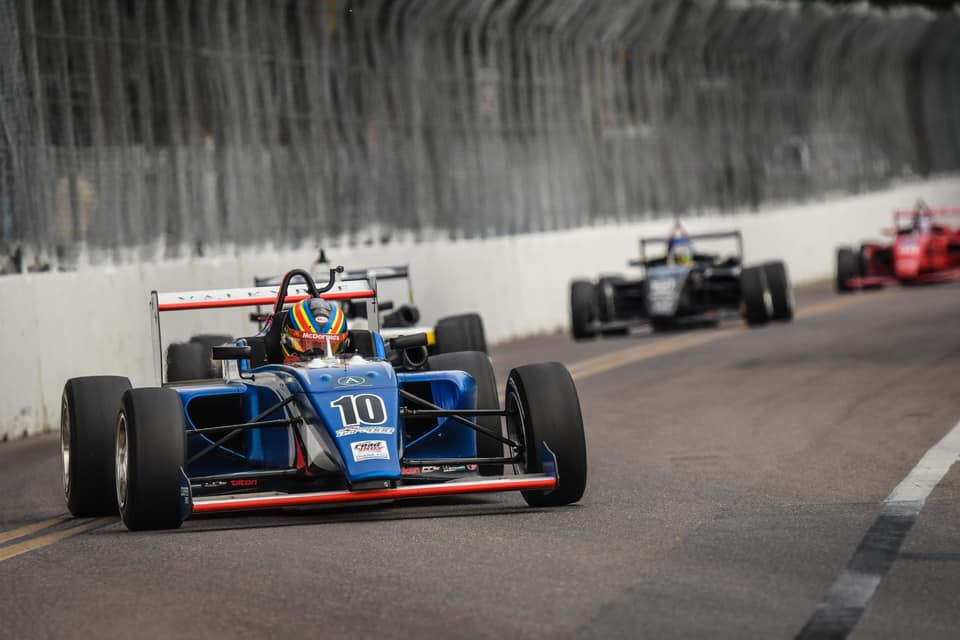 A promising start to the final weekend of the USF2000 season turned into a nightmare for Cameron Shields, who lost a likely race win due to an apparent mechanical failure.

Shields qualified on pole for the first race at St Petersburg and was leading reasonably comfortably when his DEForce Racing entry slowed just prior to the halfway mark of the 20-lapper.

History repeated in the second and final encounter, although the Queenslander at least only lost sixth with that drama.

His team-mate, Kiko Porto, became a USF2000 race winner in the Round 16 contest, as did Exclusive Autosport’s Christian Brooks in Round 17.

Christian Rasmussen (Jay Howard Driver Development) had already won the championship before arrival in St Petersburg, while Shields ended up ninth in the standings. The Rowe Racing Porsche of Earl Bamber, Laurens Vanthoor, and Nick Tandy has claimed victory in the 24 Hours of Spa.

The trio combined to take out the blue riband round of the Intercontinental GT Challenge by 4.6s over the #66 Attempto Racing Audi entry with the #54 Dinamic Motorsport Porsche completing the podium.

Changeable conditions and Safety Car interruptions punctuated the race, together with the retirement of a number of front-runners.

Two Safety Cars in the final two hours of the race shaped its conclusion, with the #98 Rowe Racing entry moving to the front.

That advantage was then maintained during the final round of stops to take a second consecutive win for Porsche at the event.

Lamborghini took out Pro-Am honours with the #77 Huracan GT3 Evo of Barwell Motorsport, the car 15th overall and six laps down on the outright winners.

A total of 38 runners were classified at the finish, the last of which was the #38 Orange 1 FFF Racing Team Lamborghini Huracan at 156 laps behind the winners.

Kyalami in South Africa will be the scene of the fourth and final round of the Intercontinental GT Challenge on December 10-12.

Bamber and Vanthoor currently head the drivers’ standings with Porsche in control of the manufacturers’ competition. 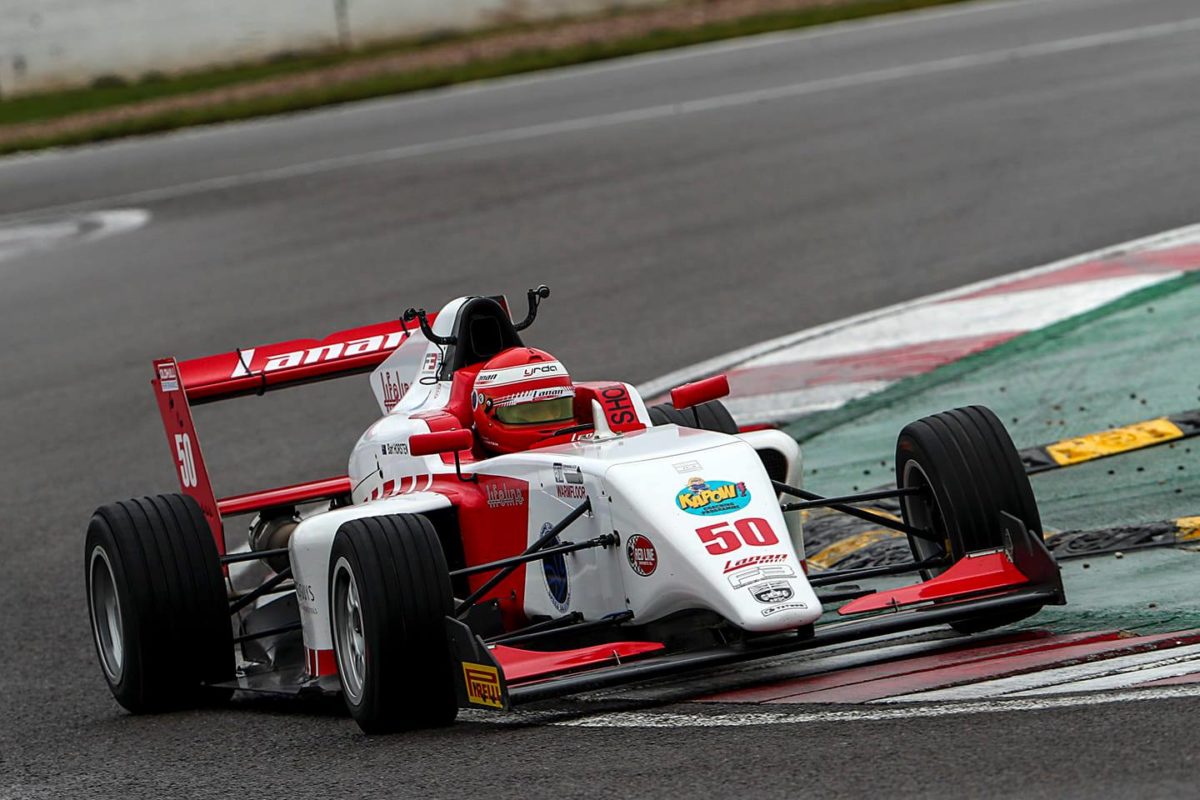 A combative performance from Bart Horsten saw the youngster make progress in two of three British Formula 3 races at Donington.

The Australian recorded finishes of 11th, 10th, and seventh across the weekend after a gamble in the opening 15-lap encounter.

Horsten was one of a handful of drivers to gamble on slick tyres on a damp track, ultimately winding up as the last classified finisher.

He then moved forward in Race 2, rising from 16th on the grid to 10th, while in the weekend’s final encounter he moved up eight spots to finish seventh.

Horsten sits 10th in the championship standings on 250 points heading into the final weekend of racing.

That is set to take place at Silverstone on November 7-8 with three races to round out the campaign. Australian youngster Christian Mansell is poised to wrap up the British Formula 4 Championship Rookie Cup at the final event of the year next month.

Racing at Snetterton, Mansell finished all three of the weekend’s races, including a podium result, to put one hand on the newcomers’ trophy.

In the opening race Mansell found himself defending the advances of Casper Stevenson in the closing stages as they battled for fourth.

That became third when race winner Zak O’Sullivan picked up a post-race time penalty that dropped him down the order, Mansell claiming the final podium spot as a result.

The Newcastle native then finished eighth in Race 2, a reverse grid affair won by his Carlin team-mate O’Sullivan from Stevenson and Roman Bilinski.

O’Sullivan then won Race 3 to round out a weekend in which he saw the chequered flag first in all three encounters but claimed only two wins.

Mansell could manage just ninth in that encounter, having picked up a five grid place penalty for contact in Race 2.

That will take place on November 14-15 at Brands Hatch, with three races scheduled to see out the 2020 season. Sam Lowes has taken over the Moto2 championship lead by dominating the Teruel Grand Prix, in which Remy Gardner finished fourth.

Lowes put his EG 0,0 Marc VDS Kalex on pole, got the jump when the lights went out, and led all 21 laps around MotorLand Aragon.

Gardner (Onexox TKKR SAG Kalex) briefly ran in second position from a front row start and was involved in the podium battle for a handful of laps more.

The Australian was just under two seconds away from the top three at the chequered flag having held off Jorge Navarro (Lightech Speed Up).

It was Fabio Di Giannantonio (Lightech Speed Up) who passed Gardner for second, five corners into the race, and he remained in that position thereafter.

The Italian finished 8.4s from victory, while Enea Bastianini (Italtrans Kalex) rounded out the podium.

Bastianini’s two-point pre-race championship lead therefore became a seven-point deficit to Lowes, who has a total of 178, with Gardner sixth on 85 points.

Moto3 went down to a final-lap battle in which Jaume Masia (Leopard Honda) took a second straight win, while Albert Arenas (Solunion Aspar KTM) stretched his championship lead to 19 points by finishing fourth.

Three rounds remain in 2020, the next being the European Grand Prix in Valencia on November 6-8.