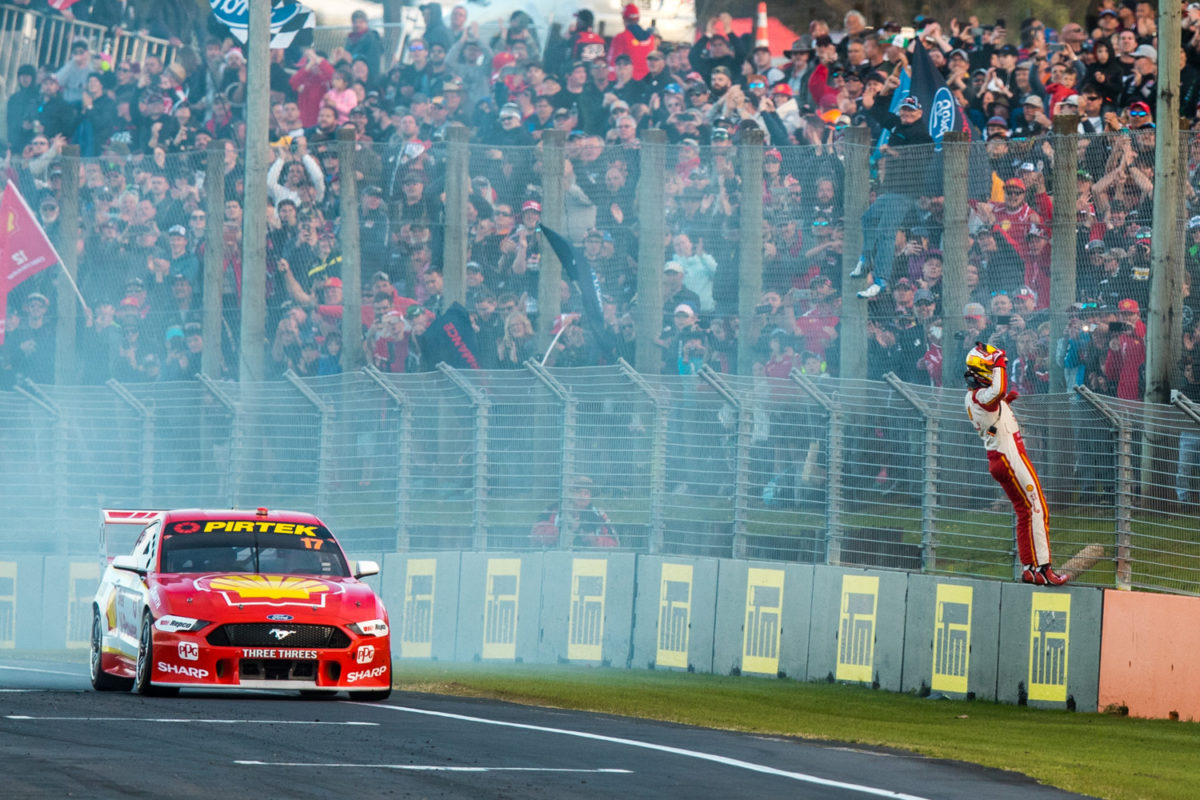 With Scott McLaughlin off to race full-time in IndyCar next year, we want to know your favourite memory of his time in Supercars, in this week’s Pirtek Poll.

McLaughlin entered the Supercars scene in 2010 as a 16-year-old, although his inexperience in race cars meant he would not contest the opening round of that year’s Super2 Series.

When his debut did come, it was an inglorious occasion that saw the young Kiwi shunted after burning out his clutch on the front row of a reverse grid race at Queensland Raceway.

Two seasons later, however, McLaughlin took out the Super2 title in a season which is still held in high regard today due to the extent of the talent which it boasted.

A four-year stint at Garry Rogers Motorsport followed, during which he returned the underdog outfit to the top step of the podium in both Holdens and Volvos.

After scooping three Supercars Championships and a Supercheap Auto Bathurst 1000 win in four years at DJR Team Penske, the 27-year-old’s run as a full-time touring car driver is over for the foreseeable future.

As such, we ask you to select your highlight from that decade-and-a-bit in this week’s Pirtek Poll. The 2012 Dunlop Super2 Series is regarded as one of the best in the second-tier competition’s 21-year history so far.

While the Bathurst stoushes between Nick Percat and Chaz Mostert are standout moments, it was McLaughlin who would edge Scott Pye to the series title.

In an FG Falcon run initially by Stone Brothers Racing and then by Matt Stone Racing, the Christchurch-born driver won four races and only thrice failed to finish inside the top four all season.

On the day on which he sealed that Super2 title at Sydney Olympic Park, McLaughlin was thrust into a sudden debut with Garry Rogers Motorsport.

Having been co-driver to Tekno Autosports’ Jonathon Webb for his first enduro campaign weeks earlier, the call-up came to fill in for Alexandre Premat after the Frenchman suffered dehydration in the penultimate race of the season.

McLaughlin would go on to finish 17th that day in the 28-car field.

By then installed as a permanent driver at GRM, he did not have to wait long for a first race win in Supercars’ top tier.

That came two events in, when McLaughlin drove the #33 Commodore to victory in Race 4 of the non-championship meeting at Albert Park.

He had run third in the early laps and emerged an effective second after serving his compulsory pit stop before Fabian Coulthard fell off the road ahead. 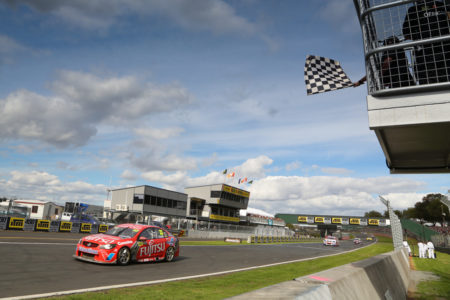 McLaughlin wins at Pukekohe in 2013

It was just another two events later when McLaughlin scored a Supercars race win which counted for championship points.

Fittingly, for the Christchurch-born driver, that occurred in the New Zealand event, by then back at Pukekohe Park Raceway, drawing a huge response from the crowd on the hill.

Starting from fourth, he was quickly up to second when Jamie Whincup ran on at the chicane and then inherited top spot when Mark Winterbottom lost a tyre.

Volvo made its return to the Australian Touring Car Championship with a bang thanks to McLaughlin’s exploits in Adelaide in 2014.

Initially, that was due to the thrilling final-lap battle in the second 125km race of the weekend, when he went wheel-to-wheel with Whincup into the parklands and ultimately prevailed over the champion for second spot.

However, the post-race television interview trumped that, when an elated McLaughlin exclaimed, “I don’t know what happened there. I just plucked it in first, gave it some jandal and f*** yeah.”

Although he would later establish himself as a qualifying master, McLaughlin also made his mark in 2014 when he tied Whincup for the greatest number of poles in that season.

With the Triple Eight Race Engineering driver one up ahead of the last qualifying session and shootout of the campaign, he had already sewn up the pole award for the year by virtue of the second place countback.

However, qualifying sponsor Armor All dangled $10,000 in front of McLaughlin if he could at least square the ledger on poles, and he duly drove his Volvo to the fastest time in that day’s one-lap dash.

In a similar case to his 2013 exploits, McLaughlin was a race winner without points being on the line at Albert Park in 2017, his first year at DJR Team Penske.

Although about as far away from home soil as the championship would take him, he chose a fitting moment to strike when it counted.

In Race 7 of the season, the #17 Falcon led the sister #12 Falcon of Fabian Coulthard to the chequered flag as Roger Penske watched on from pit lane at Perth’s Wanneroo Raceway. 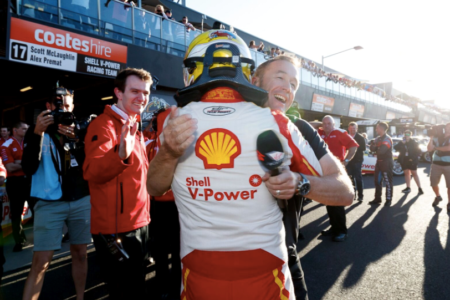 Later that year, as he established himself as a title contender, McLaughlin carved out a place in Supercars folklore at the Supercheap Auto Bathurst 1000.

Last out in the Top 10 Shootout, amid great expectations, he became the first person to drive a Supercar around Mount Panorama in the ‘threes’.

While refuting suggestions from some that it was the new ‘Lap of the Gods’, the DJRTP star did describe the 2:03.8312s as the best moment of his career to that point.

After falling at the final hurdle 12 months earlier, McLaughlin coolly converted on the streets of Newcastle in 2018 to become a Supercars champion.

A penalty to Shane van Gisbergen following protracted deliberations handed the Ford driver a clear lead in the title race, but he was always on to win the final race of the season until he sidestepped a late battle with David Reynolds.

Speaking shortly afterwards, McLaughlin described it as redemption, and also revealed the role which sports psychologist Emma Murray had played in helping him keep focused.

As he continued to rack up a steady stream of race wins, McLaughlin began to achieve some notable feats.

In 2019, he equalled a Team Penske record in notching up 16 race wins in a year.

That milestone coincided with also equalling Craig Lowndes’ record for the greatest number of race wins in an ATCC/Supercars season, both of which McLaughlin would therefore break when he won at Pukekohe that September. 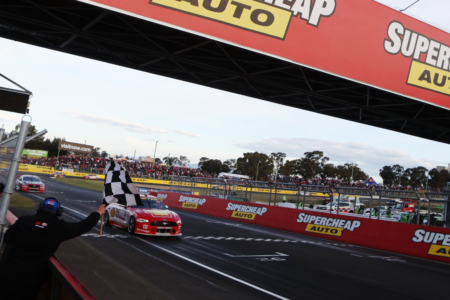 McLaughlin takes the chequered flag at Bathurst in 2019

McLaughlin’s only Supercheap Auto Bathurst 1000 win to date is one of the most controversial in the history of the Great Race, and perhaps serves as a metaphor for the broader 2019 season.

The New Zealander and co-driver Premat were at least among the best drivers on that Sunday in October, with the former holding his nerve in an incident-filled run home.

While DJRTP was penalised significantly for the ‘debriss’ fiasco, no intent to advantage the victorious #17 entry was established, and even when a black mark was formally placed against it for the improper qualifying engine, the win stood.

As such, the aforementioned single-season wins record now sits at 18.

In a repeat of 2019, McLaughlin unofficially wrapped up the crown with an event to spare.

With the season now complete, he has joined Peter Brock and Craig Lowndes as three-time champions.

For now at least, the pursuit of the likes of seven-time champion Whincup and his now former employer in Dick Johnson, who triumphed five such times, will have to wait.

With that in mind, we invite you to vote on your favourite McLaughlin Supercars memory in this week’s Pirtek Poll.