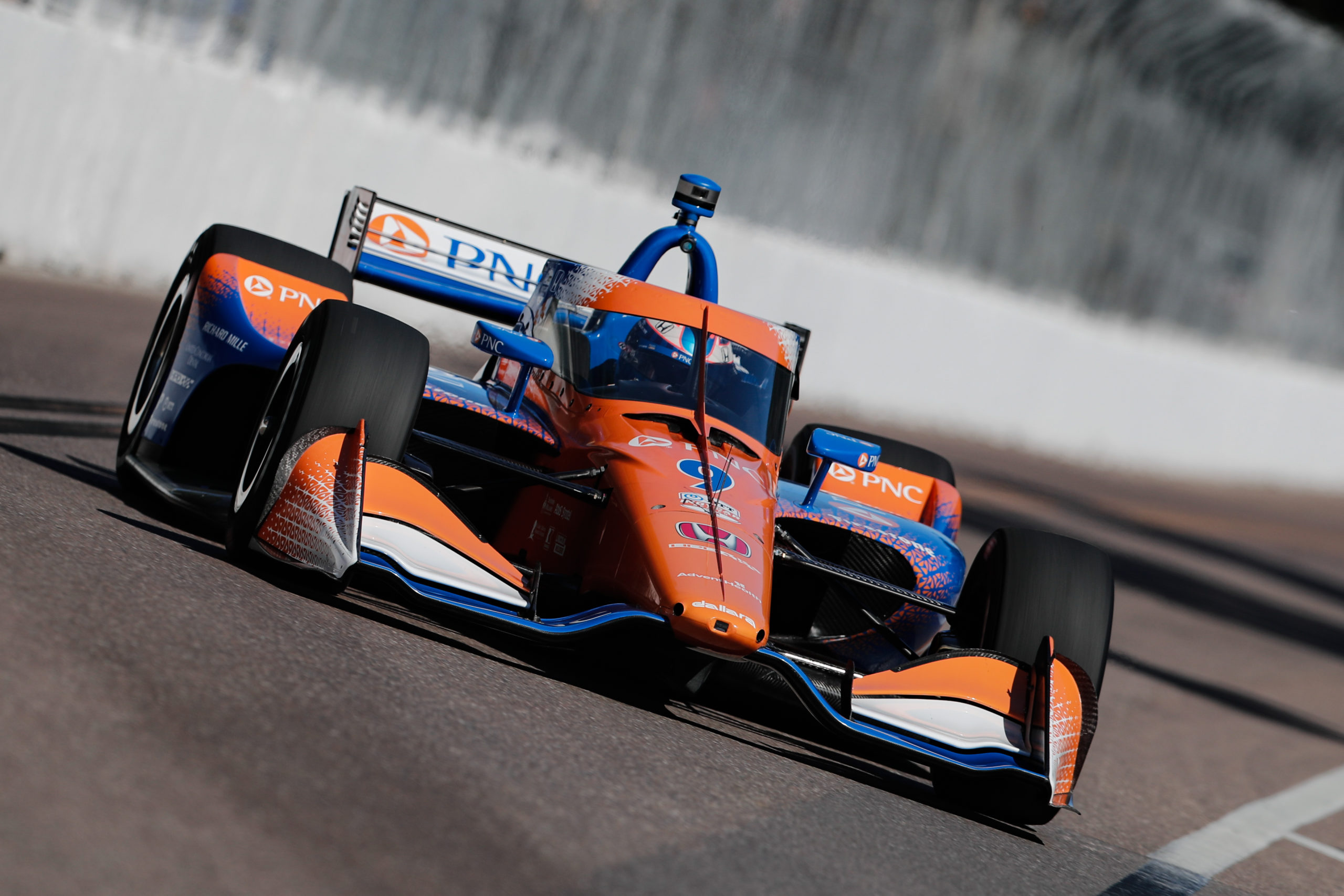 Dixon began the race from 11th and avoided drama in what was a carnage-filled 100-lap race.

Team Penske pilot Josef Newgarden came through from eighth to win the final race of the 2020 season, followed home by McLaren’s Patricio O’Ward.

Team Penske’s Will Power led from the outset with Andretti Autosport driver Alexander Rossi at his outside.

Power struck problem on Lap 5 when his Chevrolet-powered Dallara IR-18 suffered downshift issues into Turn 10. That allowed Rossi to slip through into the lead.

Baulked by the technical drama, Power went on the defensive into Turn 1 a lap later as Herta sought to find a way through.

Power locked his rear wheels under brakes and Herta blew by, followed closely by Hinchcliffe.

Newgarden was among the first to pit on Lap 29. Dixon reacted and came one lap later while Power pitted on Lap 32.

Shortly thereafter, Newgarden put a pass on Power to move up into fifth place.

Once the field cycled through it was Rossi with a 1.8s advantage over Herta. Hinchcliffe lay third followed closely by Rinus VeeKay (Ed Carpenter Racing).

The first Safety Car was deployed on Lap 36 when Power crashed out. He got loose out of Turn 3 and clouted the outside wall, bringing his car to a stop in the Turn 4 run-off.

Several cars pitted under the yellow, including series debutant Scott McLaughlin for his second pit stop of the day.

Rossi led the field to the green flag on Lap 41.

Behind him, Newgarden made quick work of Veekay, but it was only moments later that the yellow flag flew again after Ferucci crashed heavily at Turn 2.

After another brief intermission, Rossi restarted from the lead on Lap 47 with Herta, Hinchcliffe, Newagarden, Harvey, Rahal, O’Ward, Dixon, Oliver Asked, and Ryan Hunter-Reay in tow.

The third straight Safety Car intervention was deployed that lap when McLaughlin clipped Marco Andretti and spun. With nowhere to go, VeeKay collided with the Kiwi.

McLaughlin retired from the race but VeeKay continued.

Still, it was Rossi who led. Further afield, Dixon passed Rahal for eighth and quickly dispatched Harvey who was slow out of Turn 8.

Herta made a mistake on his own, locking up into Turn 4 and dropping from second to fourth, promoting Newgarden to third.

Soon after pitting from the lead, Rossi spun on his own exiting Turn 3. The Indianapolis 500 winner clouted the inside wall before coming to a rest across the circuit.

That brought the Safety Car out yet again, promoting Herta to the lead, Hinchcliffe to second, and Newgarden to third.

Herta led the field to green on Lap 74 with Hinchliffe in tow, but the race was soon back under the control of the Safety Car after Andretti spun into the tyre wall.

That came as a result of contact from Takuma Sato (Rahal Letterman Lanigan Racing) who clipped the right rear tyre of Andretti, causing a puncture.

As the yellow flag flew, second placed Hinchcliffe made a mistake at the final corner at low speed and spun.

In the rush to get going, he drove into the side of Harvey and broke his nose cone. Harvey, meanwhile, was forced to the pit lane with damage to his right rear.

On the restart, an off-sequence Palou passed Herta into Turn 1. At the leading pair battled, Newgarden got to the inside of Herta and then the outside of Palou to take the lead.

Just behind, Dixon rounded up O’Ward to move into fourth.

With 21 laps remaining, Oliver Askew (Arrow McLaren SP) made contact with Sato and embedded himself in the Turn 10 tyre barrier.

That brought out yet another Safety Car intervention. However, the Honda Civic Type R ran out of fuel while leading the field, leaving Newgarden to control the pace.

The race restarted on 16 laps to go. This time, O’Ward usurped Dixon and then Herta who then made a mistake at Turn 4, dropping to 13th.

O’Ward sought to pass Newgarden but couldn’t find a way through. As the laps wore on, the margins blew out and Newgarden crossed the line to claim his fourth win of the season.

O’Ward was a distant second with Dixon third, giving him enough points to secure his sixth title with Chip Ganassi Racing.

Newgarden claimed second in the standings while Herta was third, just three points clear of O’Ward in fourth.

The IndyCar Series gets underway in 2021 with the Grand Prix of St Petersburg on March 7.