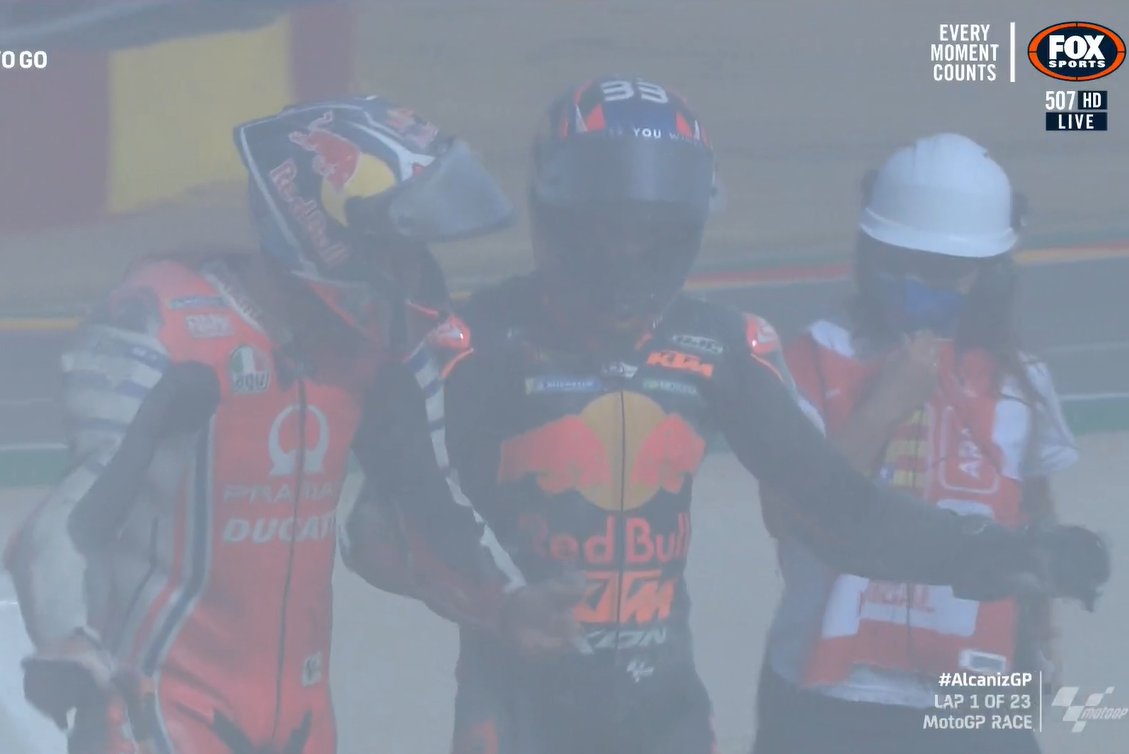 Brad Binder will have to serve a Long Lap Penalty in the next MotoGP race after taking out Jack Miller on the opening lap of the Teruel Grand Prix.

The South African started 15th, next to Miller, and made contact with the rear wheel of the #43 Ducati as the field poured into Turn 2 at MotorLand Aragon.

Both ended up in the gravel trap and while neither was injured, they took no further part in the 23-lap encounter.

As such, he will be forced to complete a long lap during the European Grand Prix, which takes place at Valencia’s Circuit Ricardo Tormo on November 8.

The premier class rookie admitted fault, saying he did not account for the opening lap congestion.

“I got through Turn 1 and I was really tight on the inside, and I prepared to carry a lot of speed through Turn 2,” recounted Binder.

“I didn’t take into account at all that obviously everyone would close the gas because there are a lot of guys coming super tight from Turn 1.

“So, a big, big mistake on my behalf again,” he added, in an apparent reference to an incident at Jerez with KTM stablemate Miguel Oliveira.

“I’m really sorry to Jack and Pramac Ducati, but if I could go back now, I’d change things, for sure, but it’s really, really not a good day.

“Whenever things happen like this, it’s never on purpose, but I’m just going to have to reset and try again next time.”

For Miller, the incident capped off a frustrating weekend on the whole.

“I mean, just the end of a not a great weekend,” said the Pramac Racing rider.

“We gave everything we had, I felt like I got a decent start, but just unfortunate.

“It is what it is; at this point in time, it’s hard to be overly disappointed with anything like that.

“It’s just one of those things, this is racing, (and) we’ll come back ready to fight in Valencia next week.”

The DNF is the Australian’s third in five races, the first of which was due to his Ducati picking up a tear-off and the second was an engine failure after a pre-race bike switch due to rain.