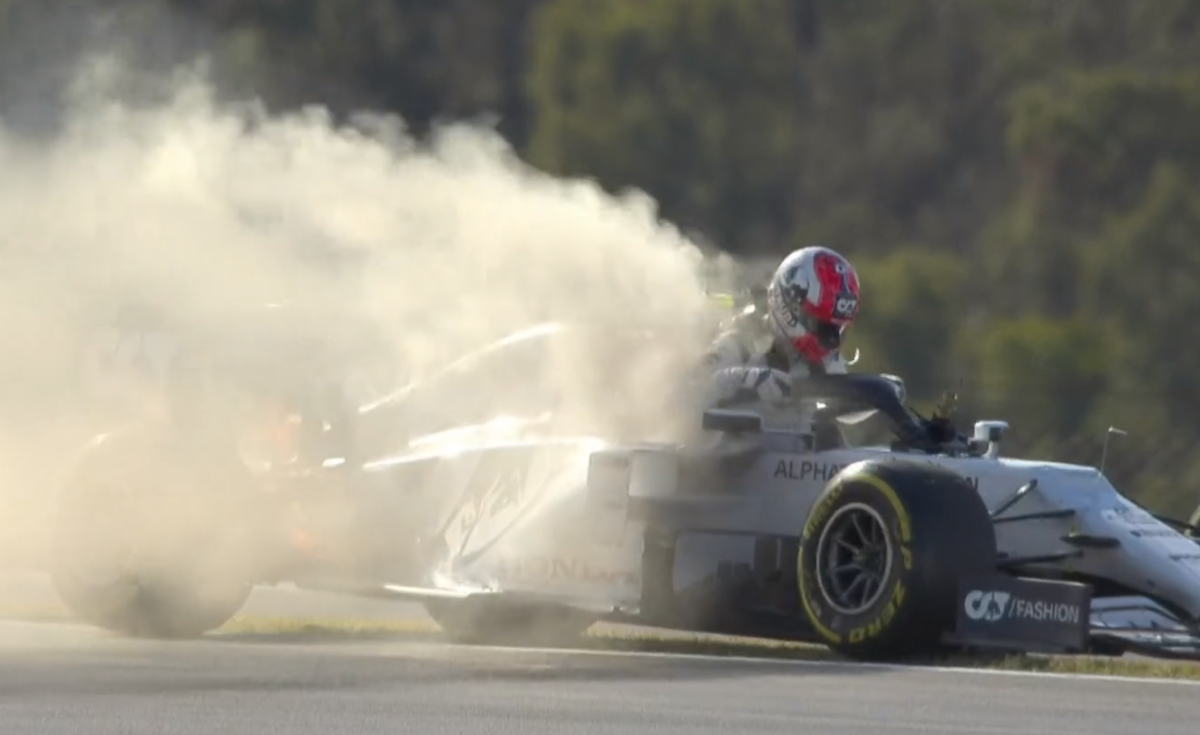 The Finn was more than half a second clear of Max Verstappen, who was involved in one of the stoppages, with Lando Norris third best.

Lewis Hamilton was 1.3s off the pace in Practice 2, while the Ferraris of Charles Leclerc and Sebastian Vettel ended up fourth and sixth fastest respectively.

The opening half an hour of the second session had been used in part by Pirelli for tyre testing as it develops a new hard compound tyre for 2021.

Conditions caught a number of drivers out, with spins for Vettel, Carlos Sainz, Sergio Perez, and a trip through the gravel for Romain Grosjean.

The session was interrupted by a red flag when Pierre Gasly’s AlphaTauri caught fire midway through the 90-minute hit out.

The Frenchman stopped on approach to the Turn 14 hairpin, leaping clear as flame engulfed the back end of the car.

A 15-minute delay ensued before the Mercedes pair headed the field back out on track.

Shortly thereafter there was contact between Lance Stroll and Max Verstappen, triggering another red flag.

The pair ran side by side on approach to the first corner, Stroll turning in to the apex despite the presence of the Red Bull to his inside.

Verstappen had entered the front straight in Stroll’s slipstream, pulling along side but unable to clear the Racing Point in a straight line.

Stroll had just completed a timed lap while Verstappen was commencing his first, after taking two warm up laps to bring his tyres up to temperature.

Left stricken in the gravel trap, the incident ended Stroll’s session while Verstappen was able to return to the pits, with stewards confirming they would be looking into the clash.

“To be honest I don’t want to talk about it too much. I was so surprised that he just turned in,” said Verstappen after the session.

“I was starting my lap, he just finished his lap. We’ll see what happens. It’s FP2 but it’s a shame that we touched. It was just very unnecessary.”

The green flag was shown with eight minutes to run with a flurry of track activity ensuing.

Without a representative flying lap time to his name, Ricciardo’s attempts at a late push lap were thwarted when he came across one of the Williams at Turn 1 as it exited the pits.

A lap later the Australian was able to start his flying effort with just over two minutes to run, climbing up to 12th after dealing with Leclerc’s Ferrari in the middle sector.

Leclerc was a promising fourth best for Ferrari while Ricciardo ended the session ninth fastest with a 1:20.058s to be 1.6s away from Bottas’ time.

It was a session dominated by track limit infringements as drivers came to terms with the new venue, which has previously only been used for testing, with more than 60 times deleted.

Final practice follows on Saturday morning ahead of qualifying, those sessions set to begin at 21:00 and midnight AEDT respectively.