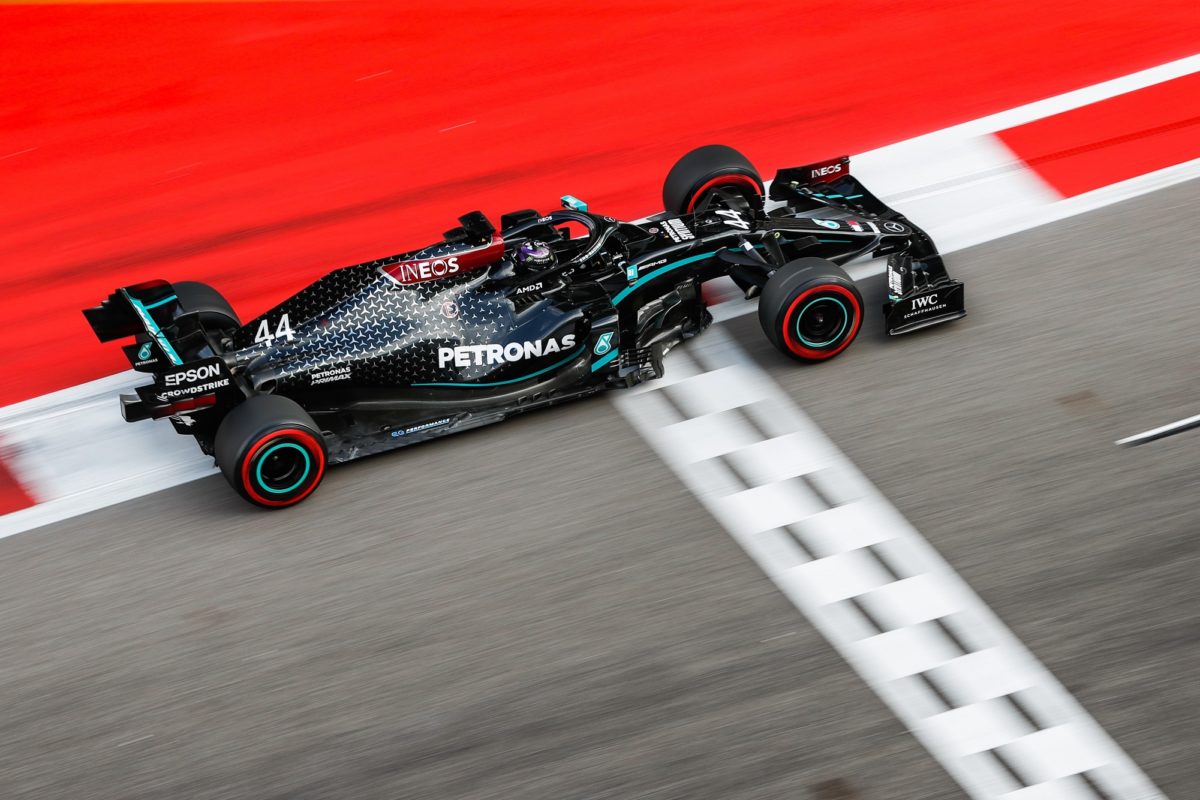 Formula 1 drivers have called for penalty points to only be issued for dangerous incidents after Lewis Hamilton was initially handed two for practice starts at the Russian Grand Prix.

Hamilton was punished for performing practice starts outside of the prescribed area by way of two five-second time penalties, one for each breach.

He also had two penalty points added to his licence, although they were rescinded when his Mercedes team admitted they had told their driver where to perform those starts.

Nevertheless, Hamilton’s Formula 1 peers have argued that penalty points should be reserved for actions which cause obvious danger, a view which was aired in the drivers’ briefing at the Eifel Grand Prix which followed.

“I raised this question in the drivers’ meeting about the driving points,” said Scuderia AlphaTauri’s Daniil Kvyat.

“How sometimes they give them to someone, then they retire those points. I think this thing needs to be a bit reviewed.

“If you get the penalty points if you cause, let’s say, a dangerous collision with someone or a really dangerous manoeuvre, and it’s clearly someone’s fault, then okay, it’s justified.

“But blue flag infringements, like all this sort of bullshit, I don’t think you really need any licence points.

“It’s not a taxi park, you know? We need to be able to always push on the limit. So, it just needs I think to be slightly reviewed, the system.”

Kvyat’s team-mate, Pierre Gasly, said, “I’m not a big fan of these points.

“Dani spoke about it, because he was in a situation where they put a couple of things on him, where I believe he didn’t do any dangerous driving or anything close to that. I just feel it’s a bit strange.

“I believe in F1 we all respect each other. Sometimes you clash with other drivers, it’s part of motorsports. But at the end, the respect is always there.

“I don’t think that’s the way to tackle the incidents that happen sometimes. I think we think we’re quite old enough and mature enough to discuss these matters.”

Drivers are banned for one race if they amass 12 penalty points, with Haas driver Romain Grosjean noting that he has come uncomfortably close to that threshold.

“I got points for blocking I don’t know who in qualifying in Bahrain early in the season in 2018, I remember that example,” he recalled.

“Twice on the radio I wasn’t specifically told anyone was coming. It’s not like I did it on purpose and you get a point for that.

“So, when you’re close to 12, you’re being careful with everything.

“Obviously blocking someone in qualifying, or even missing the pit entry speed limit and going too fast in the pit lane, or ignoring – without wanting to ignore – a yellow flag, that’s two points, so it gets (high) very quickly. Also a collision in the race can happen.

“So, yes, when you’re on a lot of points on your licence, you’re just being careful. And it’s not quite the same to be driving with that pressure on your head.”

Lando Norris is hopeful that the drivers’ briefing discussion will lead to a revised attitude to penalty points.

“I think hopefully the stewards have a better understanding of what deserves penalty points and what doesn’t,” said the McLaren driver.

“Because there are some rules where a driver gets penalty points when they shouldn’t.

“It should only be for things that really are dangerous for people, or cause serious crashes, or things really to do with safety.

“I think it’s been cleared up slightly, but we’ll see in the future when people get them again.”

“Discussions that are in the drivers’ briefing are between the drivers, myself and the team managers,” stated Masi.

Hamilton claimed in the aftermath of the Russian Grand Prix that stewards were “trying to stop me”, but later expressed regret for that reaction.

The season continues this weekend in Portugal.