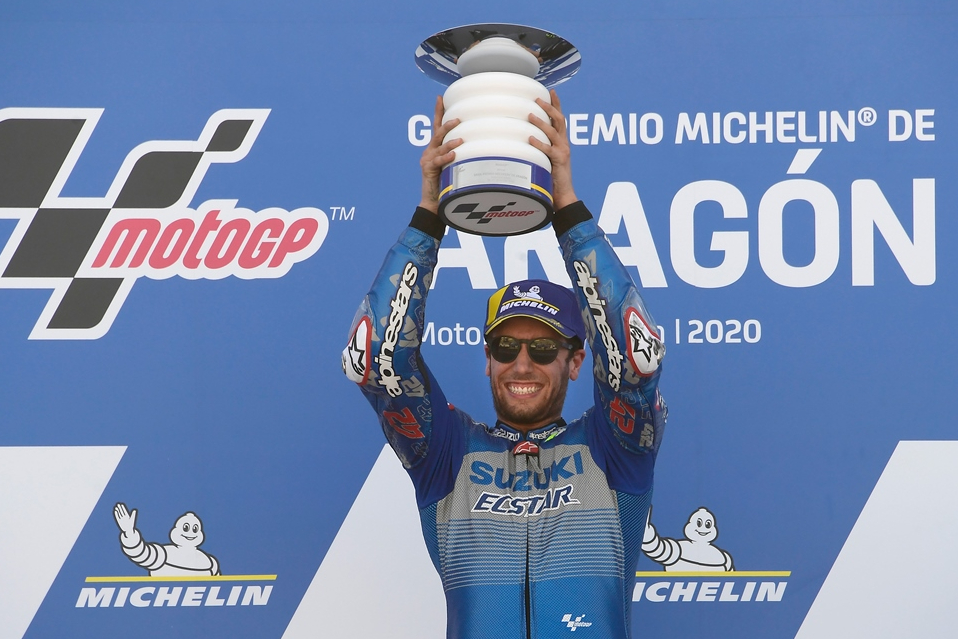 Alex Rins held off Alex Marquez in a thrilling Aragon Grand Prix to become the eighth different winner in 10 races in the 2020 MotoGP season.

Rins defied a stunning charge from Honda rookie Marquez to claim a first win for himself and Suzuki since last year’s British Grand Prix.

The race, which was the first without a former or current premier class champion since Rio 1999 due to Valentino Rossi’s COVID-19-induced absence, saw the 2020 championship lead handed to Joan Mir after pole sitter Fabio Quartararo slumped to 18th.

It was a disappointing day for Yamaha, with the manufacturer missing the podium completely despite locking out the top three positions in Saturday qualifying.

Works Yamaha rider Maverick Viñales stole the lead from Quartararo off the start ahead of the second Petronas Yamaha SRT entry of Franco Morbidelli, with Rins vaulting from 10th to fourth by the first sector.

By the start of Lap 3, Rins had cleared Morbidelli into third, and by the end of the lap, the Spaniard had set a 1:48.404s flyer to set about taking his first win in over a year.

From there, Quartararo’s nightmare began, with the Frenchman deposed by Rins at the final Turn 16-17 complex. That section of tarmac would prove Quartararo’s kryptonite all race as he battled with front-end grip.

All the while, rookie Marquez, who claimed a maiden MotoGP podium in the last race in France, was making clear progress through the field.

The reigning Moto2 champion moved past Pramac Racing’s Jack Miller into sixth on Lap 6, before using his medium-front, soft-rear tyre selection to perfection to make stable moves on Quartararo and Morbidelli at the Turn 16-17 complex.

That came after Mir had also muscled past the Petronas Yamaha SRT duo at the same part of the circuit, with the Yamahas clearly failing to replicate the pace shown over one lap at the Spanish circuit a day earlier.

A patient Rins had kept Viñales honest, and the Suzuki rider made his move for the lead at the final corner at the end of Lap 8. By Lap 14, Viñales found himself behind both Mir and Marquez.

Yamaha’s frustration only grew once Quartararo, who was battling hip soreness following accidents on Friday and Saturday, had dropped out of the points altogether by Lap 16.

Marquez carried on his attack and passed Mir at the final corner on Lap 18, leaving himself five laps to catch and challenge Rins.

The Spanish duo were joined at the hip to the end, with Marquez nearly thrown into a devastating highside at the final corner as he chased a maiden premier class win.

However, Rins couldn’t be denied, with the 24-year-old taking his third MotoGP win by just 0.263 seconds.

The result also confirmed Mir as the new championship leader on 121 points, despite the 23-year-old yet to win a race this season. Mir is the first Suzuki rider to lead the championship since Kenny Roberts in 2000.

Quartararo dropped into second on 115 points, with Viñales third on 109 points ahead of Ducati’s Andrea Dovizioso, who managed to finish the race in seventh.

The championship will remain at Aragon next weekend for the second of a double-header at the circuit, with the Teruel Grand Prix marking the 11th round of the 2020 season.