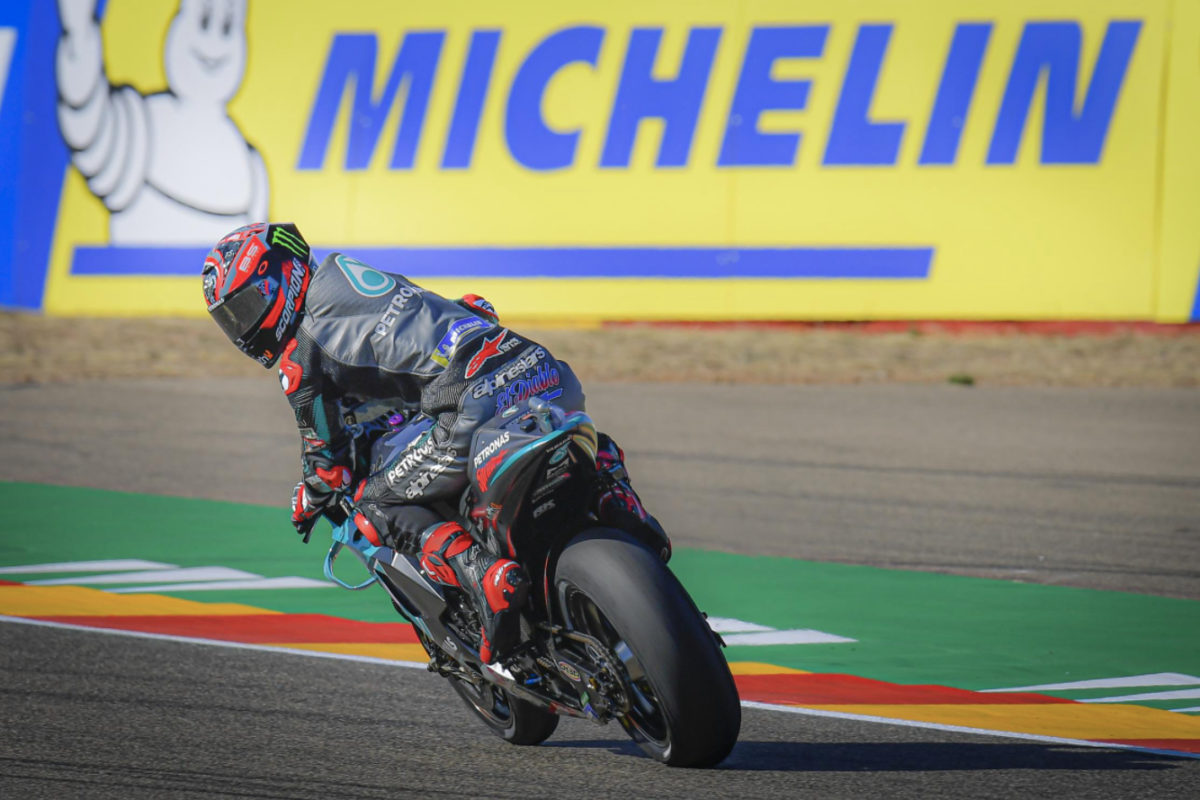 Fabio Quartararo admitted “out of control” front tyre pressure led to a slump to 18th place in the Aragon Grand Prix, a result which saw the Frenchman cede the MotoGP championship lead.

The Petronas Yamaha SRT rider started from pole position, and despite nursing hip soreness following Friday and Saturday crashes, Quartararo loomed to lead Yamaha’s charge on Sunday after the manufacturer locked out the front row.

Come Sunday, and the best-placed Yamaha rider was Maverick Viñales in fourth as Quartararo plummeted down the order and out of the points, 21.4s off winner Alex Rins.

To make matters worse for the 21-year-old, third place for Suzuki’s Joan Mir saw a swing in the title fight, with Mir claiming a six-point lead over Quartararo heading into this weekend’s Teruel Grand Prix at the Aragon circuit.

“Really struggling because we were there in good shape to fight for a great result, but we need to find out why the front pressure went totally out of control, out of the normal,” a flabbergasted Quartararo said after the race.

“Really feel strange because we had the pace to fight, I would not say for the win or the podium, but the top five, six. Would have been great, but the front tyre went out of control and we don’t know why.

Quartararo defended the decision to run the medium front tyre, with the Suzuki duo managing a one-three result using soft front and rears.

“For me, the choice was correct because the first three laps were perfect,” Quartararo reasoned.

“I had a great feeling and everything was okay, but the problem was from Lap 3 we already had the pressure much higher than normal.

“And you can imagine with 20 laps remaining in the middle of the race how high was the pressure, it was totally out of control and we’ve never rode in this condition.

“Couldn’t brake, couldn’t turn, couldn’t lean the bike. That’s the reason why I was going so wide and couldn’t stop the bike.”

Quartararo was coy about whether he could improve his race pace at the second Aragon race this weekend, and conceded he will need to be “really clever” to defeat a resurgent Suzuki outfit.

“I think we can fight with them,” he said of the Suzuki riders.

“Maybe in Aragon it’s difficult, but then we’ll arrive to tracks like Valencia where normally we are fast.

“In the November test with the new tyres, we were going so fast there and I think we can fight with them, but we need to be really clever.

“The next race will be important to not lose any points and try to win points, which for me is so important.

“But I feel we can fight with them. In the end, it’s only six points (to Mir) at the moment and we can fight for a great result.”