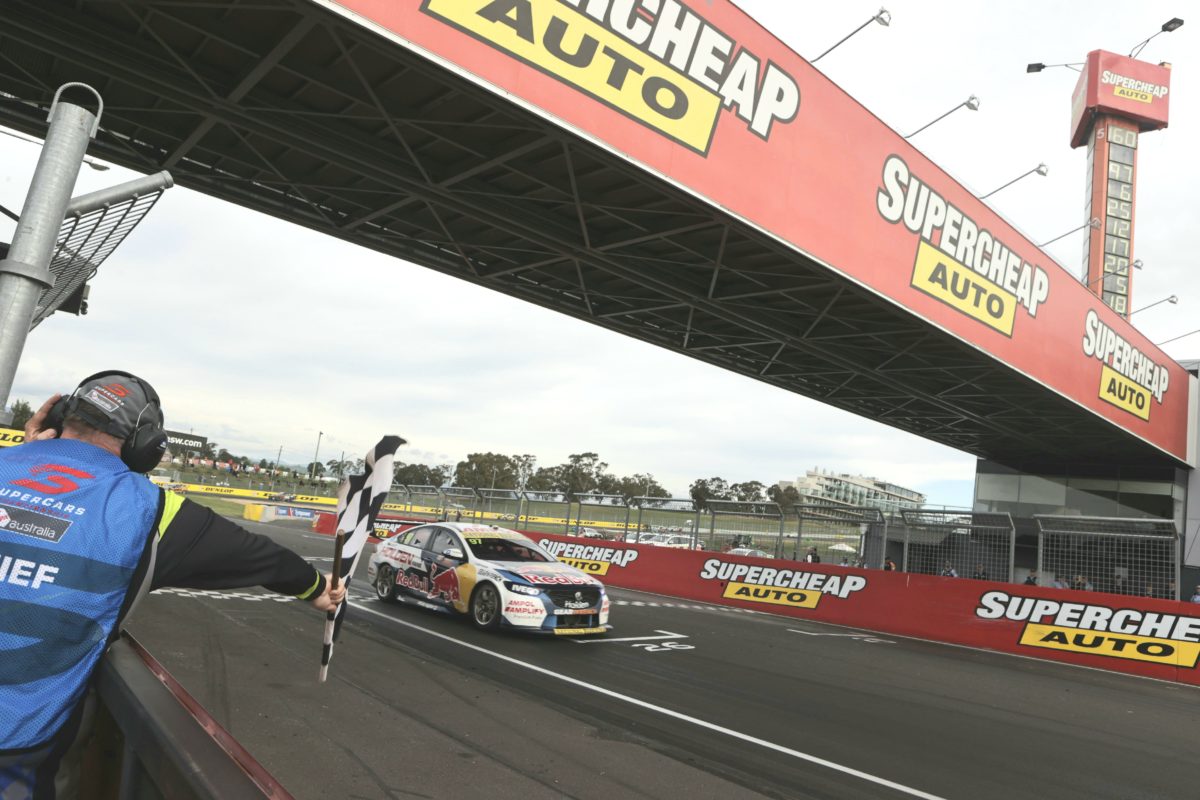 Shane van Gisbergen has prevailed in a three-lap dash to the finish to deliver the official Holden Racing Team its final win in the Supercheap Auto Bathurst 1000.

They effectively led for the 105 laps which remained, meaning a first Great Race victory for the New Zealander and a fourth for Tander, including HRT’s last three, in the year in which the Holden marque was retired.

The #6 Monster Energy Mustang of Cameron Waters and Will Davison trailed them for much of the day, and so it was that Tickford Racing’s lead car would finish second.

Shell V-Power Racing got fourth and fifth, the #12 Mustang of Fabian Coulthard/Tony D’Alberto beating the #17 Mustang of Scott McLaughlin/Tim Slade home after both were caught by an unfortunately timed Safety Car which was called 64 laps from home.

Officially, the margin of victory was 0.8663s after almost six hours and 11 minutes of racing.

Tander led by just shy of six seconds after Lap 80 of 161, with Slade holding second from Will Davison, D’Alberto, and Luff.

After a slow rotor change at its preceding pit stop, the #99 Penrite ZB Commodore was back in the top 10 when Anton De Pasquale passed Fiore at Forrest’s Elbow on Lap 87.

Slade had been installed in the #17 Mustang after its fourth pit stop, and was being told to conserve fuel in order to make his minimum 54 laps in the stint which followed.

Even then, the margin to Tander in the #97 ZB Commodore was still 5.9096s after Lap 90, while D’Alberto retained fourth in the #12 Mustang despite running off at The Chase shortly after.

DJR Team Penske was dealt a strategic double blow when the Safety Car was called on Lap 97, due to Jack Smith (#4 SCT Logistics ZB Commodore) getting stuck in the gravel after being tagged by Brad Jones Racing team-mate Macauley Jones (#3 CoolDrive ZB Commodore) at Murray’s Corner.

Slade was one lap shy of 54 and D’Alberto was forced to stack when everyone who had not recently pitted filed into the lane.

Van Gisbergen was into the #97 ZB Commodore for the run home and he led after the pit stops from Slade, Waters, Mostert, and Winterbottom.

Coulthard hopped into the #12 Mustang which had dropped to sixth, with the top 10 completed by Moffat, De Pasquale, Pye, and Caruso.

Waters picked off Slade at Hell Corner upon the Lap 100 restart and stuck with van Gisbergen across the top, while Mostert applied pressure to Car #17.

Coulthard got by Winterbottom at Griffins on Lap 104 and Mostert went down the inside of Slade at Forrest’s Elbow on the same lap, at which time van Gisbergen was just over four seconds up the road.

Van Gisbergen appeared to have shaken Waters when he was told to build his gap, and he duly set a new fastest lap of 2:06.0040s on Lap 110.

Slade was over 14 seconds away from the lead when he was called in at the end of Lap 115, DJRTP rolling the dice somewhat on fuel due to the payoff from reinstalling McLaughlin in #17.

Mostert pitted on Lap 118 and took new pads before rejoining in an effective third, while the rest were in two laps later, at which time van Gisbergen was 1.7s ahead of Waters.

They resumed in the same order and Mostert was back to third, while McLaughlin passed Coulthard for fourth up Mountain Straight as the latter came up to speed after his stop.

Winterbottom was sixth and, despite having already notched up 57 laps, co-driver Brodie Kostecki was put back into the #99 ZB Commodore which sat seventh.

Waters was making ground on van Gisbergen, while Mostert was catching both of them, but McLaughlin’s advances were soon stymied by the need to save fuel.

Car #6 had just about caught Car #97 on Lap 124 but the pole-sitter did not get close enough to shape for a pass before van Gisbergen started to gap him again.

Courtney passed Reynolds for 10th on Lap 124 at Griffins, while van Gisbergen was back to more than a second ahead of Waters on Lap 128.

Pye slipped down the inside of Le Brocq at Forrest’s Elbow on Lap 135 and Courtney got a run on his team-mate, who he then bumped partially onto the grass on Conrod Straight.

The 2010 champion was therefore able to take ninth, at the expense of a bad sportsmanship flag, and Holdsworth also went past the Supercheap Auto Mustang.

McLaughlin pitted on Lap 138 at 16.5s off the lead, but that meant he would also need to stretch his final stint to 23 laps.

Mostert had drifted to 10 seconds away from the lead when he pitted on Lap 140, while van Gisbergen was 3.2s up on Waters when they both pitted for a final time two laps later.

Tickford made an adjustment to the #6 Mustang but Waters still gained a chunk of time in the transit and was only six tenths behind when they got back onto the race track, still in first and second position.

Coulthard had followed them into the pits but was over 24 seconds away from #97 and slotted back into fourth, between Mostert and McLaughlin, after his service.

With that pit cycle done, Winterbottom was sixth from Pye, Holdsworth, De Pasquale, and Courtney.

Moffat was back in the #55 Mustang, in 11th spot, with Le Brocq reportedly experiencing nausea due to a helmet air issue.

Waters had a look at Forrest’s Elbow on Lap 145 and set the then-fastest first sector on Lap 147.

He was around 2.1s to the good when a Safety Car was called on Lap 153, with Smith having spun and become beached at The Chase, and Fullwood having crashed at The Esses.

A restart came on Lap 156 but they only got one green flag lap in before yellows flew again due to a crash for Zane Goddard at McPhillamy Park, with the #34 Unit ZB Commodore coming to rest at The Esses.

The only pass in that time was Courtney on De Pasquale for ninth, but that was after the Safety Car was called and he redressed.

Van Gisbergen backed them up for the final restart and only 0.2253s separated the top two as they took the control line for Lap 159.

The leader gapped Waters slightly on that tour, before belting out the fastest lap of 2:05.6412s on the penultimate lap of the motor race.