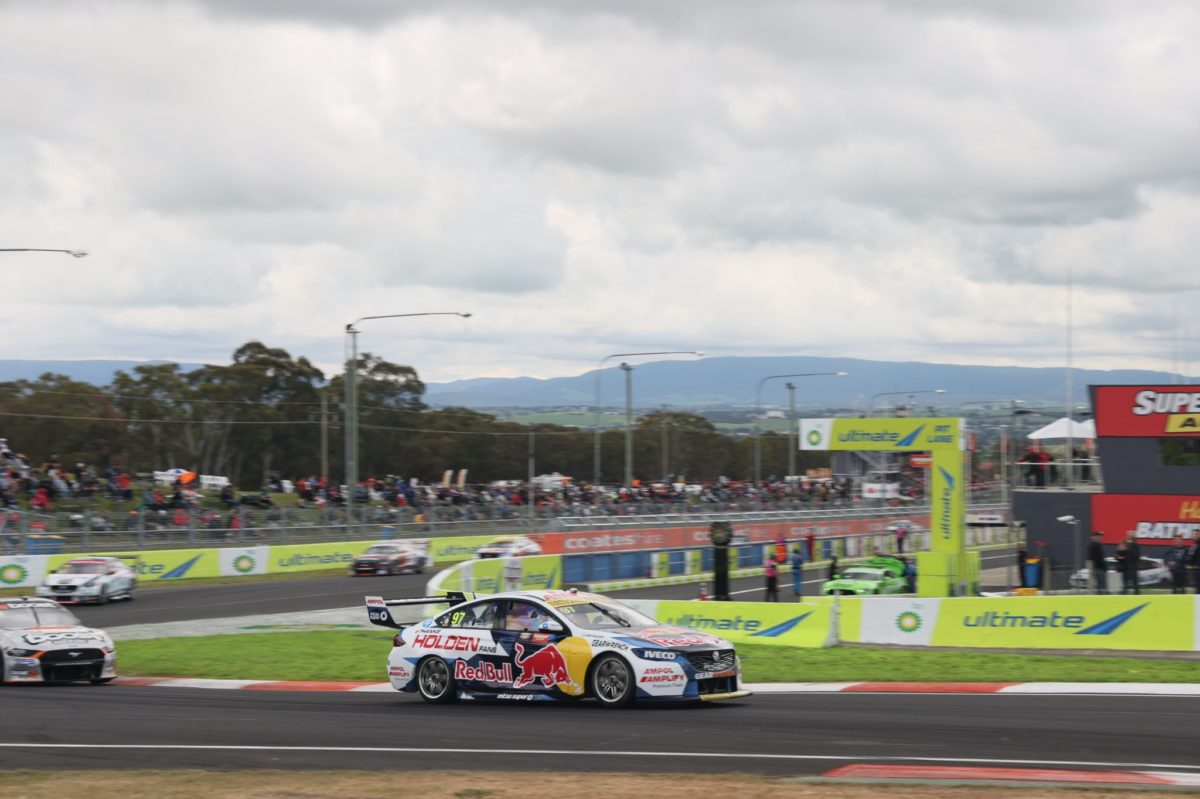 While the #97 Red Bull HRT ZB Commodore enjoys a healthy lead, on merit, shortly after the fourth pit stop cycle, the sister #888 entry is out after Jamie Whincup crashed at The Cutting.

The pole-sitting #6 Tickford Racing Mustang of Cameron Waters and Will Davison is third in the hand of the latter, from the #12 Shell V-Power Mustang of Fabian Coulthard/Tony D’Alberto and the #25 Walkinshaw Andretti United car of Chaz Mostert/Warren Luff.

The latter was slow away from seventh in the #12 Mustang but regained one spot in a hair-raising sweep into The Chase on Lap 1, with Fiore right next to him and Will Brown (#9 Penrite ZB Commodore) just behind.

D’Alberto’s team-mate led by 1.2564s at the end of the standing lap, before the #3 CoolDrive ZB Commodore with Macauley Jones behind the wheel was issued a mechanical black flag for a flapping driver’s door.

McLaughlin’s advantage cleared four seconds by the end of Lap 10, moments before Lowndes relieved Caruso of seventh at Hell Corner.

McLaughlin was 8.5s to the good when he handed over to Slade after 19 laps, and Will Davison made way for Waters two laps later.

When the cycle completed after Lap 22, Slade led Waters by 7.5s, with Brodie Kostecki third in Car #99 from Tander and Whincup, who jumped the #25 ZB Commodore which Mostert had hopped into through the stops.

Seventh through 10th was Feeney, Holdsworth, Moffat, and Andre Heimgartner (#7 Ned Mustang), who was among the first to pit.

Mostert was quickly pressuring Whincup for fifth and Kurt Kostecki dropped from 11th to 13th, behind Coulthard and Nick Percat (#8), when he ran wide at Hell Corner on Lap 25.

Waters brought Slade’s lead under three seconds on Lap 30, before Tander got by Brodie Kostecki at Griffins and put Car #97 into third on Lap 31.

Whincup quickly closed up on Car #99 and was rebuffed when he attacked at The Chase on Lap 32 before having to block Mostert at Murray’s.

The four-time Great Race winner had another crack at Brodie Kostecki when they next arrived at Griffins but, in ensuring he was clear of the Erebus car on the way out, Whincup arrived wide of the ideal line at The Rockface.

The back end of the #888 ZB Commodore stepped out and crunched the wall at The Cutting, bringing an end to its campaign.

All 23 cars circulating at that time filed into the pits, and Waters jumped Slade with a transit time of 2.67s less than #17.

Shane van Gisbergen got into #97 and it retained third, from Brodie Kostecki, Mostert, Holdsworth, Le Brocq, Coulthard, Percat, and Heimgartner.

When the race restarted on Lap 36, Mostert wasted no time in attempting to prise fourth position off the #99 ZB Commodore.

Brodie Kostecki, however, defended doggedly, and there were a number of close calls until the Erebus driver ran off at The Chase and dropped the spot on Lap 38.

Holdsworth was more decisive in getting past the Penrite machine to take over fifth at Griffins on Lap 40.

Despite reports of light rain at the top of the mountain, Waters set a new fastest lap of the motor race on Lap 39, and again on Lap 40, stretching his advantage over Slade past five seconds on Lap 43.

With 50 laps in the books, Waters led by 7.2s from Slade, van Gisbergen, Mostert, Holdsworth, Brodie Kostecki, Le Brocq, and Coulthard, who was on his way into the pits, then Percat and Heimgartner to round out the top 10.

Again, all cars, except three which had been serviced recently, were into the pits.

A brief shower commenced as the field was readying for a restart on Lap 54, Dale Wood demonstrating how difficult the conditions were when he skated the #15 Castrol Mustang off the road at The Chase as he took his wave-by from 17 laps down following an earlier clutch failure.

O’Keeffe followed the Safety Car into the lane to go for wets, as the slippery surface made for a frantic handful of laps.

Van Gisbergen got through McLaughlin for second at Forrest’s Elbow on Lap 54, then Will Davison at Hell Corner on Lap 56.

Coulthard slipped underneath McLaughlin at Griffins Bend on Lap 55 and he ceded fourth also in letting Brodie Kostecki follow Car #12 past on the run to The Cutting.

Amid that, reports came through that the rain had passed, and so it was that O’Keeffe and Chris Pither (#22 Coca-Cola ZB Commodore) would get rid of their wets on Lap 58.

Meanwhile, Coulthard passed Will Davison for second on Lap 57 and quickly brought van Gisbergen’s margin from almost two seconds back to under one.

Brodie Kostecki ran just off the track at The Chase on Lap 58, allowing McLaughlin back past, while Fullwood pitted from 11th on Lap 64 due to an intermittent power steering problem in the #2 ZB Commodore.

Randle brought the #8 ZB Commodore into the pits three laps later due to an engine misfire, before Brodie Kostecki gave up fifth to Luff with an off-track excursion at The Chase on Lap 70.

Van Gisbergen was back to over 3.5s up on Coulthard when the latter pitted on Lap 74 and was followed in by Brodie Kostecki.

Van Gisbergen himself, Will Davison, Luff, Winterbottom, Caruso, and David Reynolds (#9 ZB Commodore), the latter from seventh, all stopped on Lap 75, with most if not all of those entries taking rotor changes.

McLaughlin did so a lap later again and Slade emerged in second spot, behind Tander the #97 Triple Eight entry, after the fourth pit stop cycle.

De Pasquale was back in 11th after a slow rotor change on the right-front corner of the #99 Erebus Motorsport ZB Commodore.

Tander was 4.4s clear of Slade at the completion of the latter’s out lap, and over five seconds to the good on the next 6.213km tour of Mount Panorama. 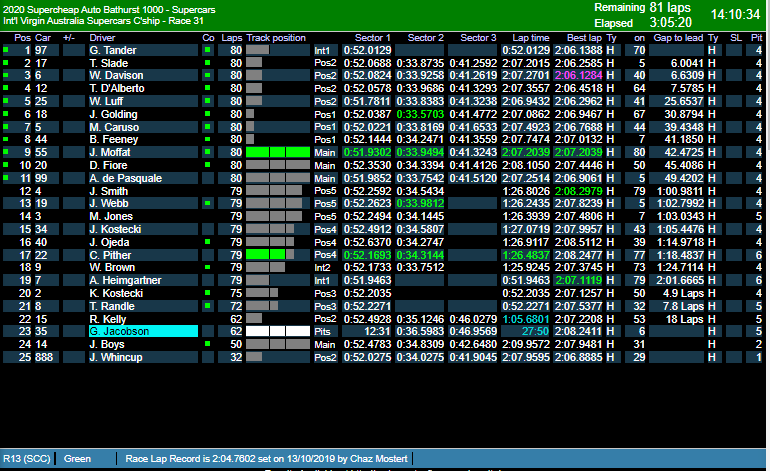