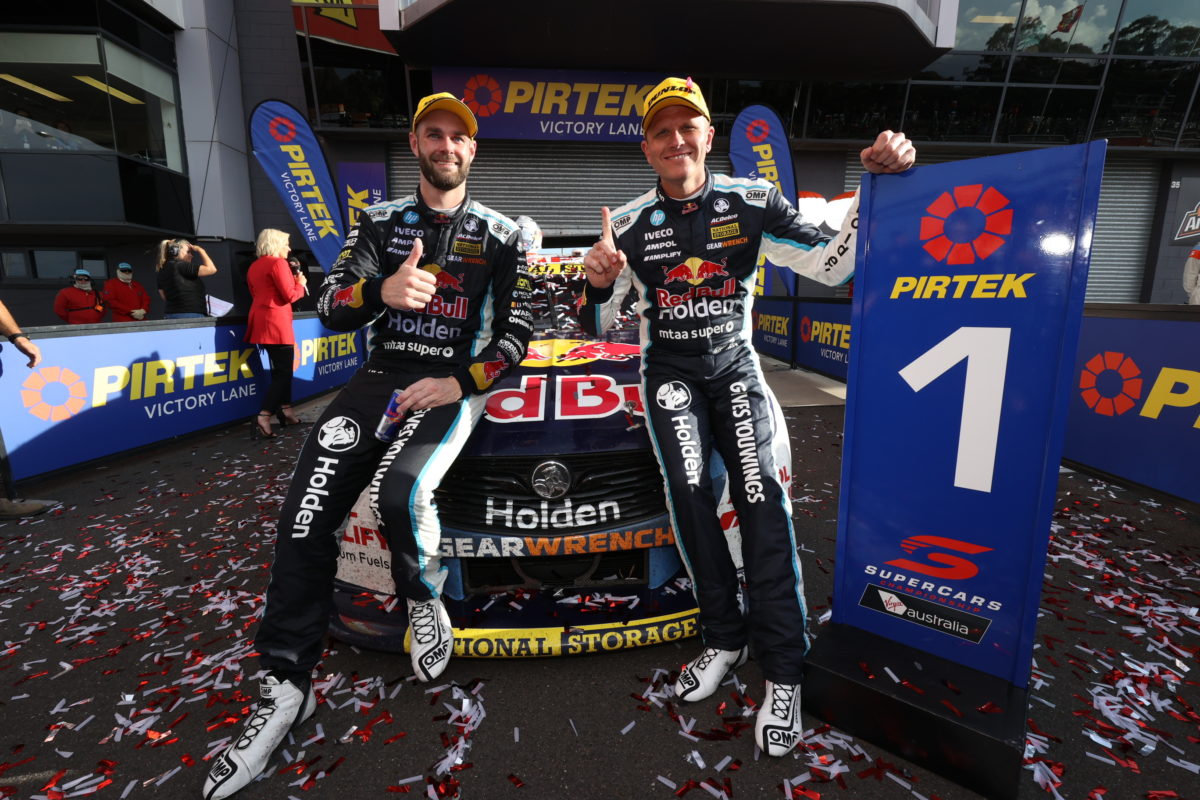 Shane van Gisbergen has described his and Garth Tander’s victory in Holden’s final factory campaign in the Supercheap Auto Bathurst 1000 as “awesome”.

Van Gisbergen and Tander claimed a nervous with, the former seeing off two late Safety Cars and a high-pressure challenge from Cameron Waters to claim his first Bathurst 1000 crown.

“The last few laps were really tough with the Safety Cars.

“Team did a faultless job, car got better all weekend. Thanks to my guys, we had a great car.

“Great way to send out Holden. Thanks to Garth, he did an awesome job. I just wish Mum and Dad were here.”

Heading into Sunday, fears of rain saw the race start moved 30 minutes earlier, though it ultimately delivered little more than a shower.

That arrived shortly before a Safety Car restart on Lap 54, dousing the circuit for a handful of laps but never enough to necessitate a switch from slick tyres to wets.

In those conditions, van Gisbergen took the ascendancy and climbed to the front of the race where he and Tander would remain.

The final stint of the race was highlighted by a nervous battle between van Gisbergen and Waters, the pair running within a second of one another.

After dropping Waters in the closing stages, the lead advantage was eliminated when Jack Smith and Bryce Fullwood fell out of proceedings, the Safety Car called before releasing the field on Lap 157.

It was out again sooner after when Zane Goddard found the fence at the top of the mountain, setting up a three-lap dash to the flag, with Waters glued to van Gisbergen’s rear bumper as the race went green.

“I knew as long as I got through Turn 2, I’d be fine,” van Gisbergen said.

“Each time it got pretty close, but got through Turn 2 with good grip and knew I’d be okay.

“When that rain came, I was bit slow at the start but then got going and that got us to the front and we never left it. Awesome day.”

Formerly three-time winner Tander admitted he was nervous while watching on from the garage.

“I was okay until about two to go, and that restart, probably didn’t need that one,” he said.

“Awesome job by Shane, the way he managed those last three stints was amazing to watch; he’s really, really impressive.

“When I jumped back in, in the middle part of the race, the car was so good.

“I’ve never had a car so good around here in the race.”

The result marked Tander’s first win as a co-driver, and draws him level with the likes of Allan Moffat on four Bathurst 1000 wins.

“It’s weird, obviously now in the co-driver role, I much prefer to be in the car at the end of the race, having control over your own destiny.

“But Shane was so good at the end there.

“This one will take a little while to sink in.”