Scott McLaughlin has reiterated his gratitude to the Victorian-based Supercars teams for keeping the championship alive after he officially claimed a third crown.

Five teams representing 12 of the 24 cars in the Virgin Australia Supercars Championship field have been away from base since July 6, 15 weeks ago as at tomorrow, due to border closures.

In that time, eight events have been held out of a total of 11 this year, with the season now closed after the Supercheap Auto Bathurst 1000.

The sacrifice was marked with a photograph of those five squads in Mount Panorama’s pit lane last night, before McLaughlin paid another tribute of his own.

After the bitter feelings in the paddock last year, the Shell V-Power Racing Team driver described the “camaraderie between the teams” as his most enjoyable aspect of the campaign.

“Obviously, last year it was pretty full on; tit for tat,” he recalled.

“This year, everyone knows how hard it’s been for everyone, and there’s been a lot of good, hard racing.

“(It has been) probably the best racing we’ve ever seen, probably the most at stake, because we didn’t have the turnarounds to come back and fix cars and whatever, especially the Victorian teams.

“So, credit to the Victorian teams for the sacrifice they gave for us, their families, the sport, the volunteers as well – there’s many volunteers I saw that went all over the country – so thanks to them for just keeping the sport going.

“Really proud of that.”

McLaughlin was also gracious about the result on the day, having finished fifth in a Great Race which was taken out by the Red Bull Holden Racing Team’s van Gisbergen and Garth Tander.

“Congrats to Shane and Triple Eight racing for their win today,” he remarked.

“They were faultless all day and just made it happen, so well done guys and everyone on the podium.”

McLaughlin unofficially won the championship with an event to spare and ultimately collected 13 race victories out of 27, heading the standings all the way from the conclusion of Race 2 of the campaign in Adelaide.

He marked his achievements with a lurid burnout display on the cool down lap at Mount Panorama, tearing a chunk out of the rear guard of his #17 Mustang.

“(I am) proud of everyone at Shell V-Power Racing; it’s been an awesome year,” said the 27-year-old.

“It’s been hard for a lot of teams, including ours, and I’m just proud to bring home the bacon.

“I got told by the TV guys, ‘Make it cool’, and I did,” he explained regarding the burnout.

“I thought Skyline would be pretty sick coming over the top, so I’m looking forward to seeing the pictures.

“Unfortunately for the boys, after quarantine, they’ve got to fix the guard, but I figure they’ve got worse problems in the world.”

McLaughlin concluded by thanking his loved ones.

“It’s been a lot of hard work from a lot of people from behind the scenes; my mum and dad, my sister Sam, my wife Karly,” he noted.

“It’s been a long road, but I’m really proud.

“I’ve had some amazing partners along the way, and the partners we have now at the team.

“It’s just been awesome, I’m really proud to have three of these (championships); it’s pretty awesome.”

While Supercars is done for 2020, McLaughlin will be in action next weekend when he races an IndyCar for the first time in the North American category’s season finale on the streets of St Petersburg. 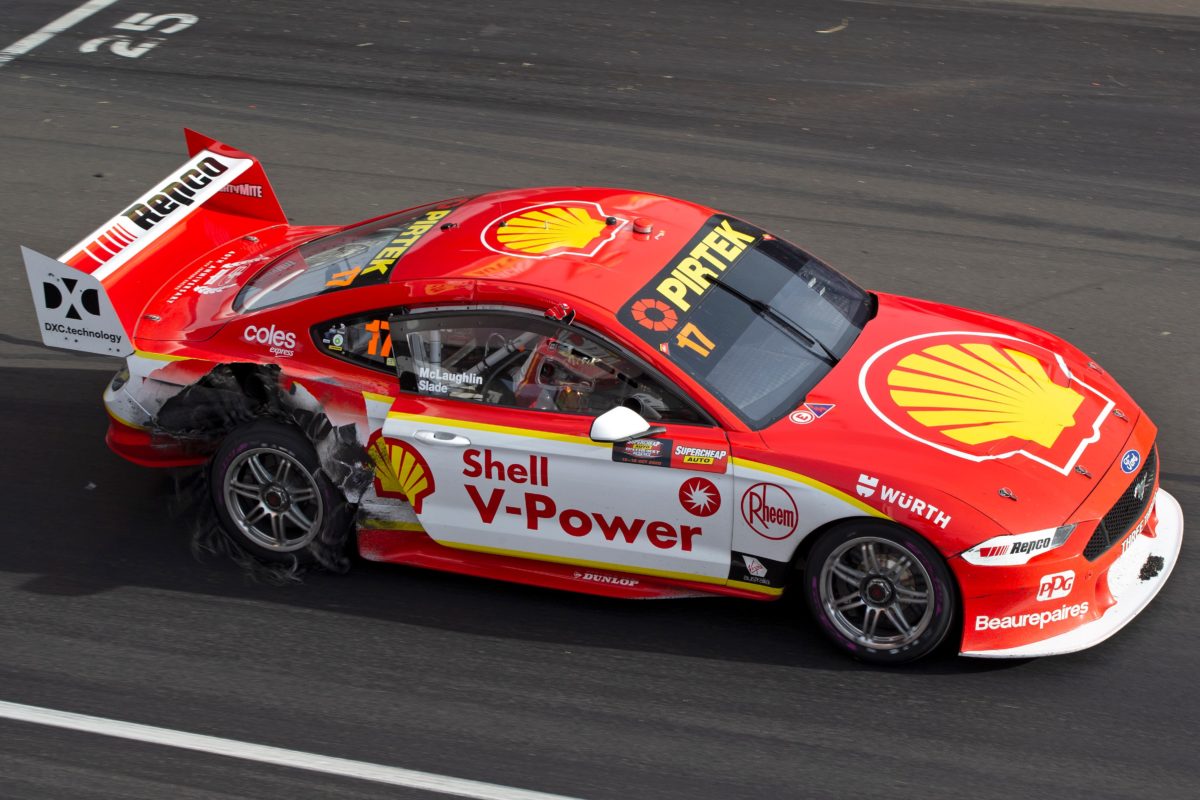 McLaughlin’s Mustang after his burnout