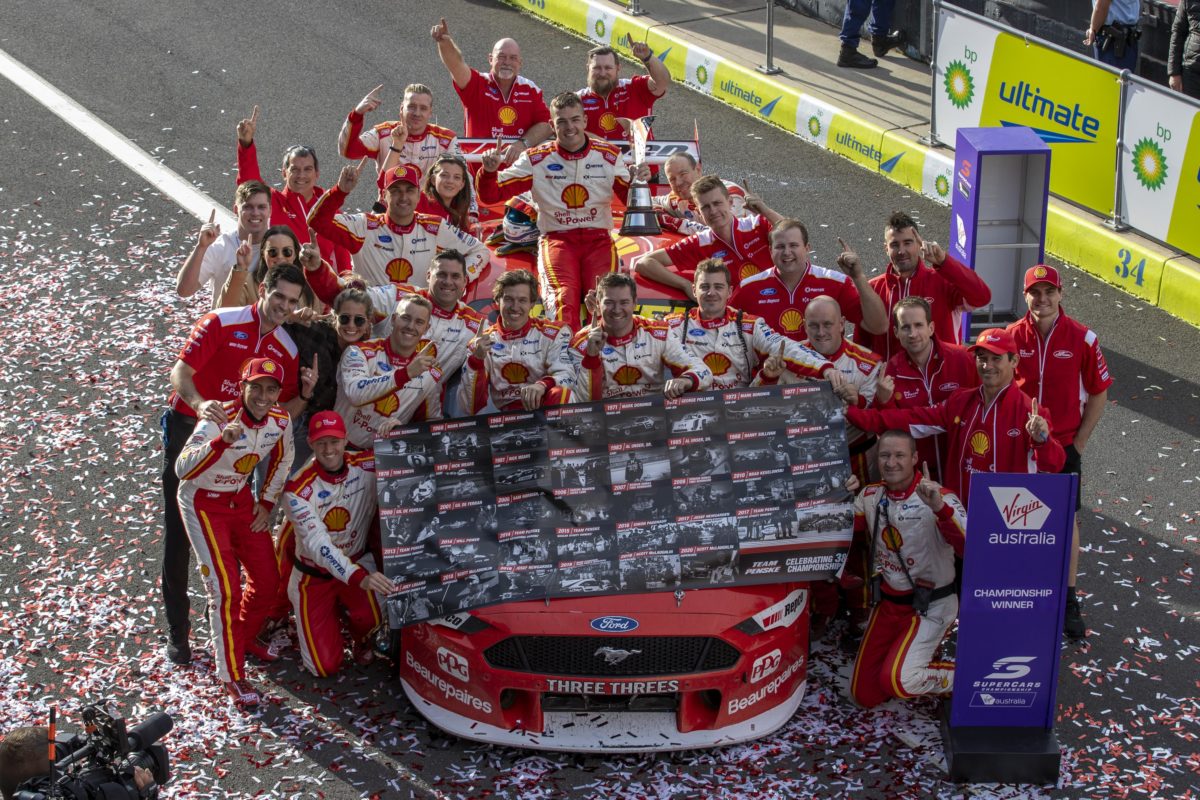 The Shell V-Power Racing Team wrapped up the 2020 teams’ championship, and a record 10th drivers’ title, by finishing fourth and fifth in this year’s Supercheap Auto Bathurst 1000.

DJR Team Penske arrived at Mount Panorama 100 points up on the Red Bull Holden Racing Team/Triple Eight Race Engineering, with a maximum 576 points on offer in the Great Race.

The Ford squad’s quest to secure another title was given a boost when Jamie Whincup crashed Car #888 at The Cutting on Lap 33, leaving just Shane van Gisbergen and Garth Tander in contention to collect points for Triple Eight.

While they grabbed 300 by winning the Bathurst 1000, DJRTP scored 462 thanks to Fabian Coulthard/Tony D’Alberto and Scott McLaughlin/Tim Slade rounding out the top five.

“For us, DJR Team Penske, the teams’ championship is the number one thing we aim for,” said Team Manager, Ben Croke, at the Gala Awards presentation which followed the race.

“We want to be the end garage, and it’s proof that both cars really do a good job and the guys in the pit lane and everything behind it has just gone really well.

“It’s hours behind the scenes, late nights… I don’t think we’ve had a night before midnight here this week, and at the workshop it’s never just a standard day.

“For the team, we even made it to the final of the Pit Stop Challenge. Stuff like that, it’s what we strive for.”

Croke’s comments come on a weekend during which his crew managed to change a transaxle within an hour-long practice session and send D’Alberto back onto the race track after he had lost drive earlier in the session.

The teams’ championship is the primary determinant of the following season’s pit lane order, although exactly how the pointy end shaped up could depend on what form the Stapylton-based squad takes in 2021.

DJRTP also won the teams’ title in 2017 and 2019, and boasts a current streak of three drivers’ crowns, courtesy of McLaughlin.

The New Zealander’s threepeat was effectively secured at The Bend but is now official, meaning that, collectively, Dick Johnson Racing/DJRTP has now amassed 10 drivers’ titles.

Triple Eight is next best on eight, and boasts nine teams’ championships, the most recent coming in 2018.