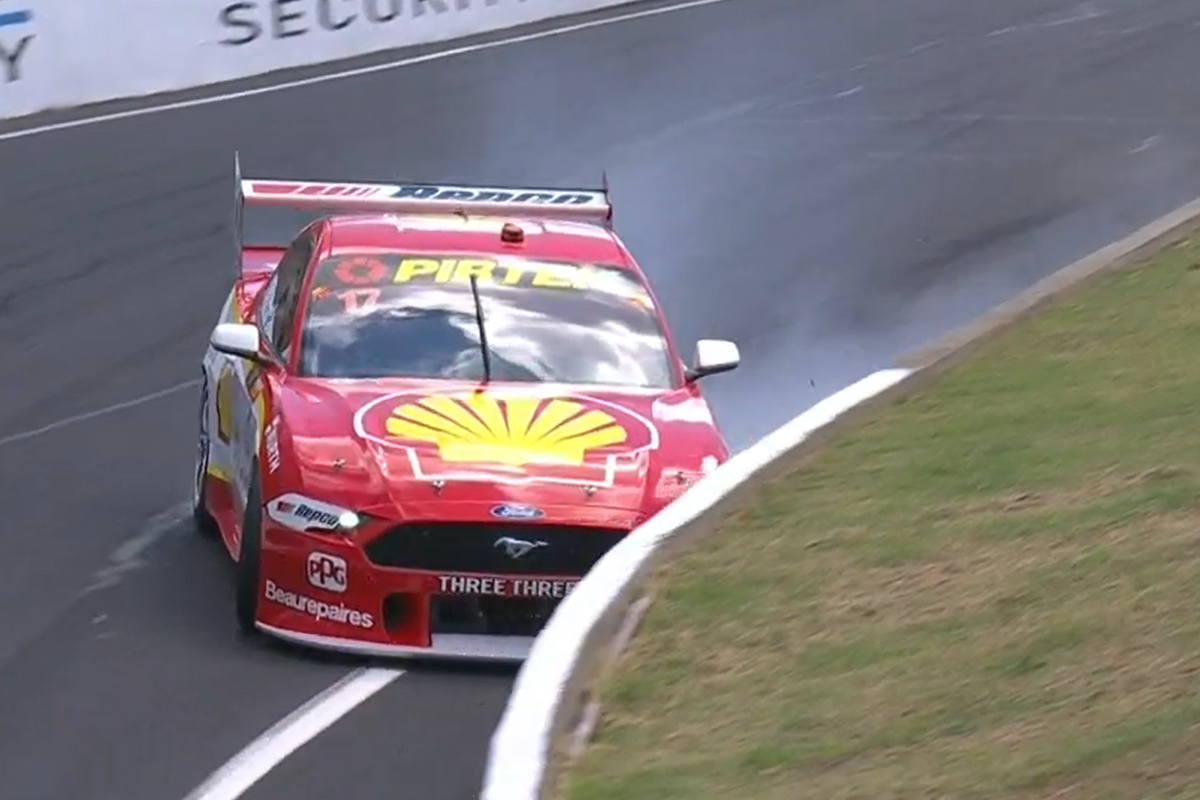 Scott McLaughlin set the fastest lap before crabbing back to the pits after hitting the wall in Practice 5 for the Supercheap Auto Bathurst 1000.

The 2019 Great Race winner laid down a 2:04.3716s with green tyres, 43 minutes into the hour-long session at Mount Panorama, but came to grief when he went for an apparent qualifying simulation right at the end.

McLaughlin was fastest to the first sector but a snaggy gear change as he came down the mountain caused the back of the #17 Mustang to break free, and the left-rear corner made sizeable contact with the wall just above Forrest’s Elbow before the front was pulled in.

McLaughlin spun into that left-hander and while he was able to drive back to the pits, the Shell V-Power Racing Team machine was obviously bent.

The incident may have also denied several of his rivals a chance to improve on their personal best lap times, leaving championship rookie Bryce Fullwood second at 0.1133s off the pace in the #2 Mobil 1 Middy’s ZB Commodore.

Thursday fast man Cameron Waters did go fastest to the second sector subsequent to McLaughlin’s crash but opted to pit instead of completing the lap, and the #6 Monster Energy Mustang remained fourth on the timesheet, behind the sister Tickford Racing entry of Lee Holdsworth (#5 Truck Assist Mustang).

When the session began, it was only Nick Percat in the ‘fives’ having driven the #8 R&J Batteries ZB Commodore to a 2:05.9806s.

Chaz Mostert (#25 Mobil 1 Appliances Online ZB Commodore) then closed to 0.0072s off the pace, before McLaughlin raised the bar with a 2:05.3983s despite a somewhat untidy run out of The Chase.

That lap was reportedly completed on new tyres while McLaughlin and Waters went out with used rubber for their third runs.

Jamie Whincup took greens for his third run and, after giving up one lap due to a moment at Griffins, drove the #888 Triple Eight Race Engineering car to a 2:04.6280s.

McLaughlin went out on new tyres on his fourth run and duly reclaimed first position with a 2:04.3716s, before Holdsworth moved to second with a 2:04.5299s.

Fullwood, the recently re-signed Walkinshaw Andretti United driver, then fired in a 2:04.4849s, bumping Holdsworth to third, from Waters and Whincup, ahead of the final runs.

Only a handful had a chance to then go for really hot laps due to McLaughlin’s crash, leaving that top five unchanged.

Van Gisbergen got in a 2:04.6792s just before that moment to move up to sixth, ahead of Mostert, Alex Davison (#19 Local Legends ZB Commodore), Courtney, and Scott Pye (#20 DeWalt ZB Commodore).

Both of the cars which caused red flags in Practice 4 were back on-track.

Todd Hazelwood putting the #14 Cub Cadet ZB Commodore 15th and Tyler Everingham ended up at the foot of the timesheet in the #40 Valvoline ZB Commodore after their co-drivers had incidents in the preceding hit-out.

Although there were a handful of offs in Practice 5, McLaughlin’s was the only major on-track mishap, while Matt Stone Racing encountered an oil leak in the #35 Yellow Cover ZB Commodore.

The next session for the Virgin Australia Supercars Championship field is Qualifying, at 16:05 local time/AEDT.