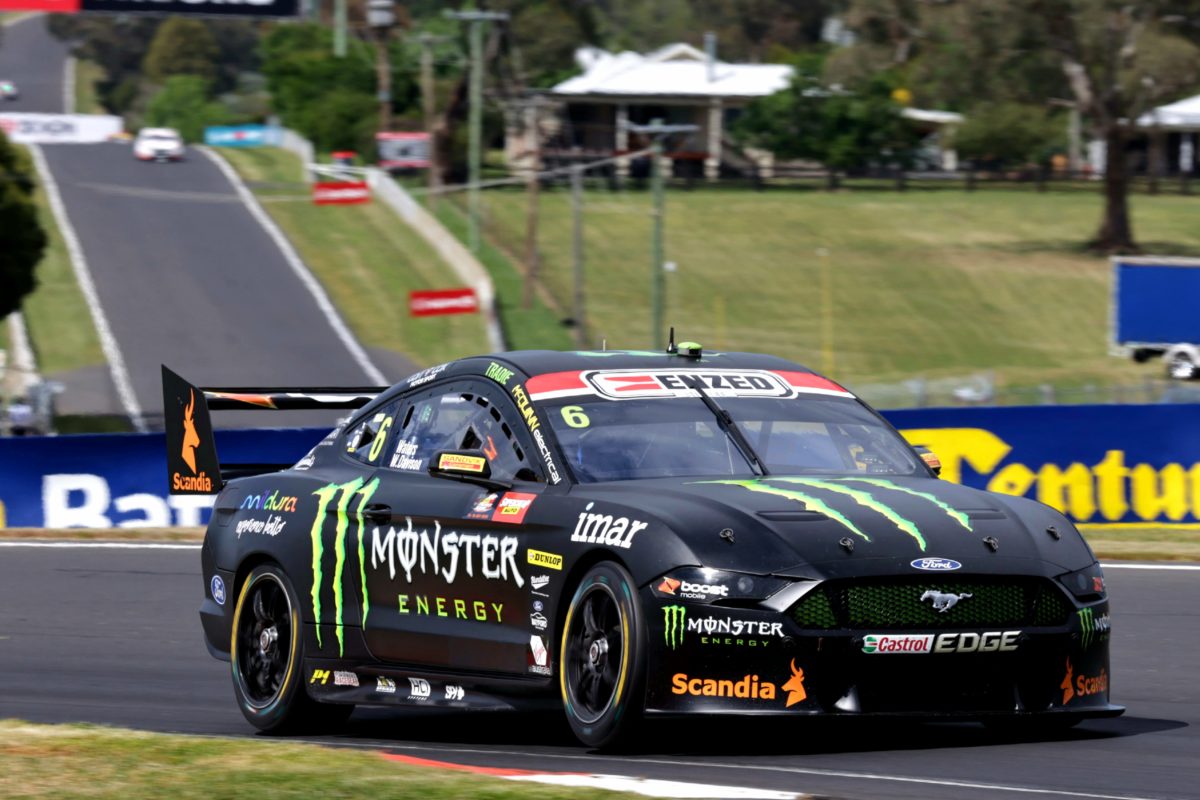 Will Davison has gone fastest in the second co-driver session at the Supercheap Auto Bathurst 1000 while rookies Jayden Ojeda and Jordan Boys caused separate red flags.

Ojeda lost the rear of the Garry Rogers Motorsport entry on his way into The Cutting before scraping the wall, midway through the hour-long hit-out, although it was one of the more innocuous hits for that section of the Mount Panorama circuit.

With 10 minutes to go in Practice 4, Boys appeared to arrive too hot at Hell Corner and ran Todd Hazelwood’s Cub Cadet ZB Commodore into the tyre wall which lines the gravel trap.

Five minutes remained after Car #14 was recovered, which Davison used to good effect by clocking a 2:05.0667s in Cameron Waters’ #6 Monster Energy Mustang, seeing that Tickford Racing’s streak of topping every session so far this weekend continues.

Practice 4 began under cloudy skies and light rain began to fall during that mid-session stoppage, although it hardly affected any actual running.

The third flying laps saw a similar pattern, Slade improving to a 2:06.7372s before being bettered by the other Triple Eight Race Engineering entry, with Tander laying down a 2:06.4551s in Car #97.

Lowndes was back to second at the end of the first runs, one spot up on Thomas Randle (#8 R&J Batteries ZB Commodore), before Wood clocked a 2:06.3422s.

Davison had a slight scare when he pinched a brake and ran wide at Forrest’s Elbow but subsequently improved to a 2:06.2474s such that he was sixth before ending his second run proper.

A red flag came in the 28th minute to retrieve the #40 Valvoline ZB Commodore, resulting in a net loss of two minutes from proceedings.

It also saw a brief period of precipitation which cleared as cars rolled back onto the circuit, as evidenced by the spate of fastest and personal best sectors which followed almost immediately.

Davison moved the benchmark to a 2:05.5948s with just over 20 minutes remaining, before James Moffat (#55 Supercheap Auto Mustang), who set the pace in the first co-driver session a day prior, made it an all-Tickford top three when he achieved a 2:05.8904s.

James Golding (#18 Irwin Tools ZB Commodore) had just usurped them with a 2:05.4785s, and Tony D’Alberto was fastest to the second sector in the #12 Shell V-Power Mustang, when Boys’ incident unfolded.

The recovery left enough time for one to two flying laps per car, with D’Alberto going to second on a 2:05.5292s before Tander went to the top.

Caruso split them on a 2:05.4233s before team-mate Davison bettered all.

The last practice session before Qualifying, which is open to all drivers, is due to start at 12:10 local time/AEDT.