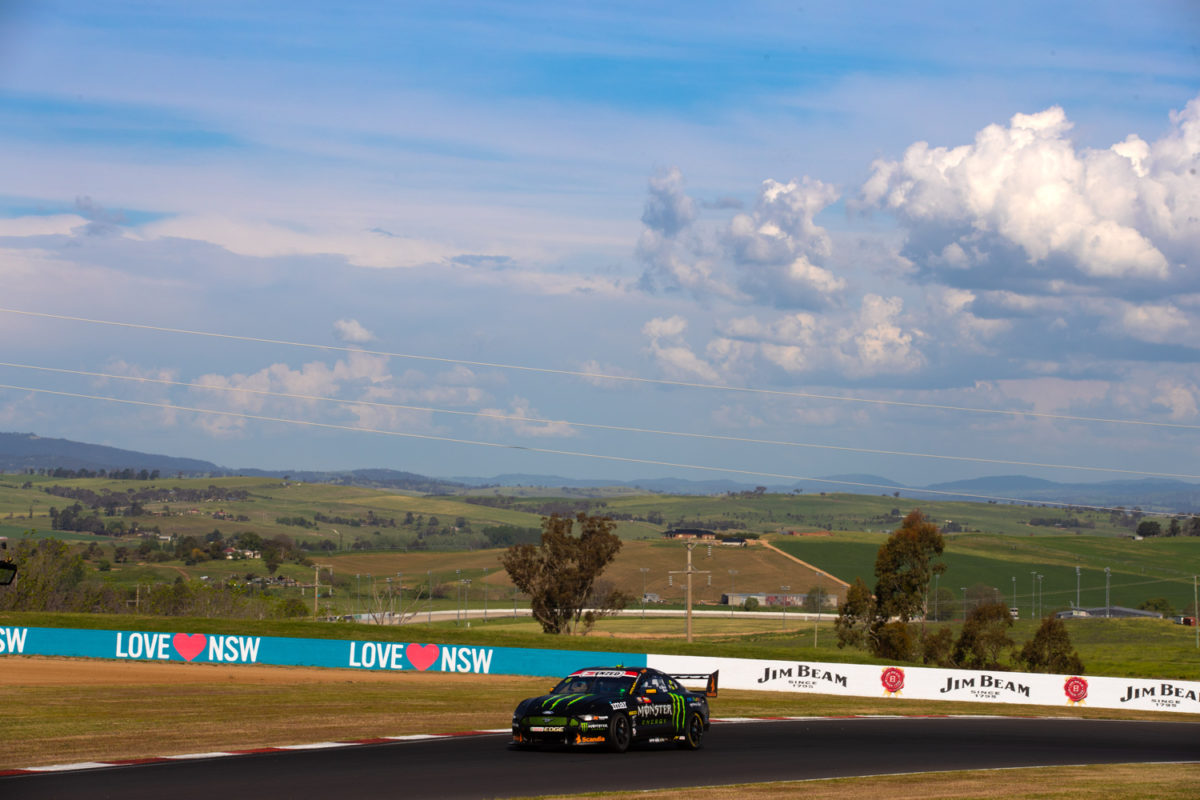 Cameron Waters’ desire to finish what would be the fastest lap of Day 1 of the Supercheap Auto Bathurst 1000 was the reason he ran out of fuel.

Waters’ Monster Energy Mustang came to a halt next to Mountain Straight just after he set the 2:04.1696s which saw him better Scott McLaughlin by almost three tenths of a second in Practice 3.

The last-start race winner achieved that time with the chequered flag out and there was therefore no knock-on effect, although it made for an ironic footnote at the end of a day in which Tickford Racing’s #6 entry topped two out of three sessions.

Co-driver Will Davison was also fourth-quickest in Practice 2, the co-driver hit-out which saw James Moffat prevail in the Supercheap Auto Tickford Mustang.

“It was great, obviously a good start to the weekend,” said Waters.

“The car was really good and Will fit it in quite well as well.

“(It was a) Productive day; the car is straight, which is the main thing. The only hiccup was running out of fuel.

“I was debating with my engineer (Sam Potter) that whole flying lap to try and let me finish it.

“He wanted me to pit and I was like, ‘Nah, come on, it’ll be ‘right’, and luckily he let me finish it, but I thought I would’ve had enough to get back, but obviously not.”

The final minutes of that session saw most opt for qualifying simulations, with Waters suggesting there will be a focus on longer running tomorrow.

“Obviously there’s the question mark of the weather (but) we can’t control that.

“We’ll just focus on what we’re doing now, and we’ll keep getting Wilbur comfy in the car and we’ll go from there.”

Davison’s running in Practice 2 and Practice 3 was his first since he lost his drive due to a commercial shortfall caused by the pandemic.

The two-time Supercheap Auto Bathurst 1000 winner admitted that the time out of a race car meant that his early laps at Mount Panorama took some adjusting, but was pleased with his and Waters’ output.

“It’s good to be back. It was awesome, to be honest,” said Davison.

“(It was a) Tough situation for all the co-drivers today.

“It was a bit bizarre; six months on the sofa and going cold turkey at this place for a Thursday, trying to get seat positions right and things like that – all the things you normally knock over before you get here – but it felt good to be back, and the car feels really strong.

“I don’t want to feel rusty ever again. It only took a few laps but a few times I had to make sure I wasn’t in the simulator and do a few weird, bad, whacky habits I picked up in that thing. In all reality, it was just really nice to be back.

“The cars have changed a little bit but, to be honest, it all feels pretty comfortable.

“I was just sort of doing our race work and Cam’s doing the speedy stuff, and he’s doing it really well.”

Davison will take to the wheel of Car #6 for another co-driver session when Practice 4 takes place tomorrow at 09:45 local time/AEDT.