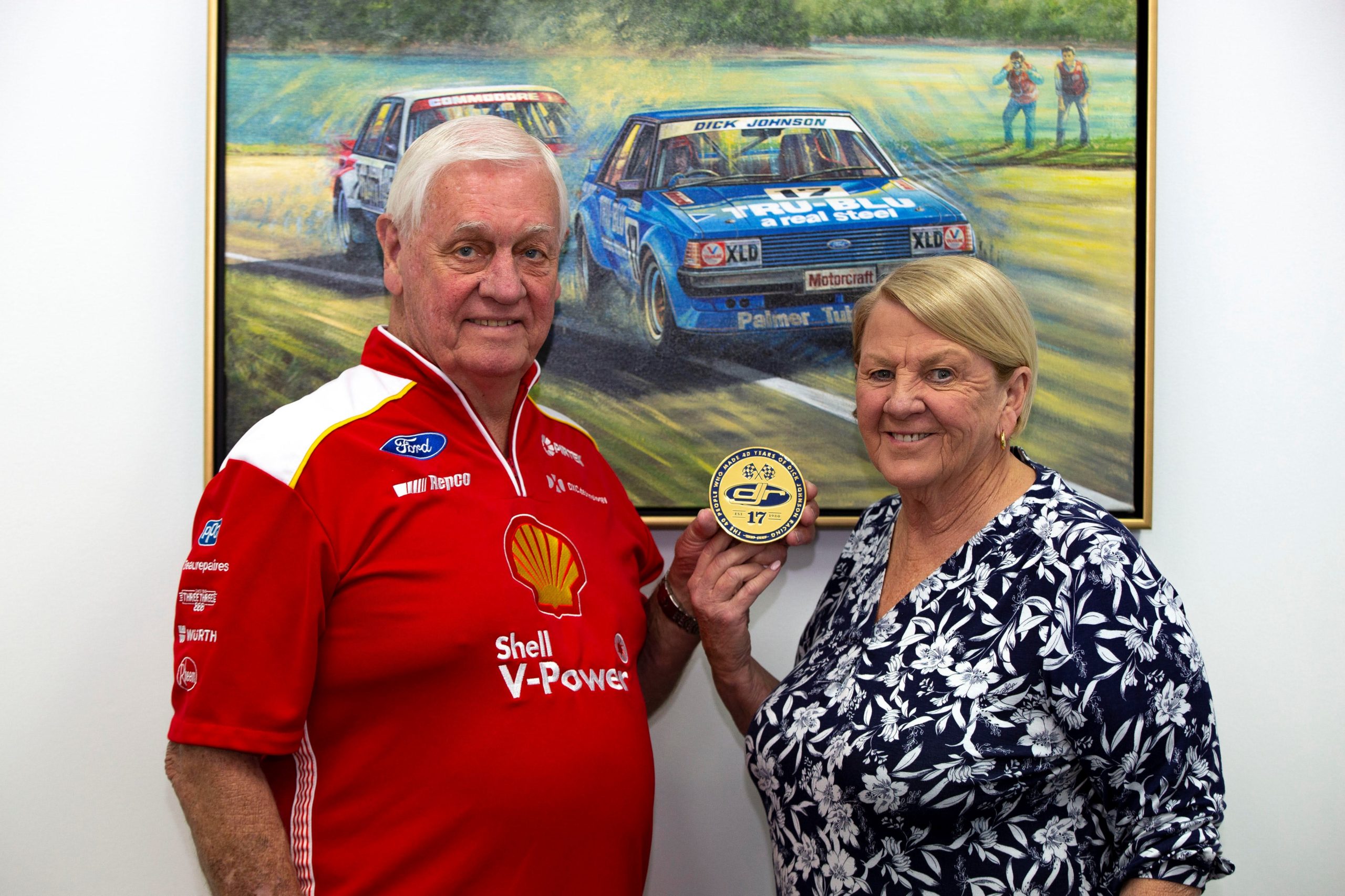 Dick Johnson Racing has produced 40 commemorative coins celebrating the team’s 40th anniversary that will be gifted to significant contributors to the team’s success.

This year’s Supercheap Auto Bathurst 1000 marks 40 years since the infamous incident that saw Dick Johnson collide with a rock while leading the Great Race.

Dick Johnson and wife Jill had just mortgaged their house to finance Dick’s racing ambitions, acquiring a Ford XD Falcon that was then famously crashed on Lap 18 of the race.

Following the incident, tens of thousands of dollars in donations from fans soon poured in for Johnson.

After an emotional live interview on Channel 7, then Ford Australia boss Edsel Ford II offered to match the amount raised by the public, which ultimately netted Johnson over $140,000.

As a result, Dick Johnson Racing was formed on December 3, 1980, and the team has remained a staple of the Virgin Australia Supercars Championship ever since.

Now, DJR Team Penske has marked the anniversary of the team’s formation with 40 commemorative coins that will be distributed to those who contributed greatly to its success.

Each coin is custom made for the recipient with their name inscribed.

The full list of contributors will not be made public in full, but among the recipients are Edsel Ford II as one of the first investors as well as team co-owners Ryan Story and Roger Penske.

John Bowe and John French, the only two drivers to share a Bathurst 1000 win with Johnson, will also each receive a custom-made coin (pictured below).

Speaking with Speedcafe.com, Johnson said it was an extremely difficult task choosing who would receive the token of their appreciation.

As such, a secondary lot of smaller Dick Johnson Racing commemorative coins will be distributed to more supporters.

Each coin comes with a personally signed note from Dick and Jill, thanking them for their contribution.

“This all sort of kicked off with Ryan’s idea along with Jilly to get together and put together some names of the people who over those 40 years have made a significant contribution to the team and the making of it,” Johnson told Speedcafe.com.

“Edsel Ford II made an extremely large contribution by our standards. Going back to 1980, it was a lot of money.

“There were guys that helped us along the way in the beginning who were unpaid staff.

“I had one guy working for me who was on a wage and other than that it was just friends of mine that came around after work every day, seven days a week until about 11 o’clock every night.

“It’s all those people, plus a lot of others along the way, in the way of sponsors and just people who have contributed to the success of the team and kept it all going.

“In the latter years, it’s the guy sitting in front of me, who has done a significant amount to keep it all going, Ryan Story.

“We’ve always believed in trying to make sure that the people that have helped us know that it doesn’t go unnoticed,” Johnson added.

“This is one of the key reasons that we’ve done it is to make sure that those people realise that we think about them and really appreciate what they’ve contributed.” Story said the commemorative coin was a fitting token to show the family’s gratitude over the four decades.

“If you think about the 40 years of DJR there are only two people who have been there for every moment, and that’s Dick and Jilly,” he explained.

“What this project enabled them to do, with the help of Dick’s brother Dyno and Roy McDonald, who was Dick’s first employee, was to look back over 40 years.

“As Dick says, guys like Edsel Ford II, Bryan Byrt, Roger Penske, Ross Palmer, a series of key people who were instrumental in getting the team through those 40 years.

“It was a great opportunity to acknowledge that contribution to this incredible team of Dick’s and really to give them a small token of appreciation for their contribution and their efforts and their dedication of what’s been 40 years of extraordinary achievement, highs, and lows.”

Some of those key contributors in the team’s 40-year history are unfortunately no longer around to celebrate the anniversary.

Among those is the late Mike Raymond who was part of that iconic interview with Johnson that kickstarted the fundraiser.

Son Andy Raymond, who has previously worked as a commentator for Fox Sports, will receive a commemorative coin.

“The plan with some of the people who have passed, and in the case of Mike, we will reach out to Andy on behalf of the Raymond family to present him with the medallion,” said Story.

“It’s a small token of what is enormous appreciation, admiration, respect, and gratitude as much as anything else for the part he played.

“Getting Dick on television after hitting the rock was obviously instrumental in building the team, but I think Dick gave back tenfold in terms of what he managed to achieve personally on track.

“Also, the delight he gave to race fans with the advent of RaceCam. He was the only guy who could talk to the commentary box and not give up lap time if any.

“Mike Raymond was such a key, pivotal figure.”

DJR Team Penske will conclude its season at the Supercheap Auto Bathurst 1000 over October 15-18.

Champion-elect Scott McLaughlin will be joined by Tim Slade in the #17 while Fabian Coulthard will be paired with Tony D’Alberto in the #12.

CLICK HERE to watch Johnson reflect on 40 years of DJR