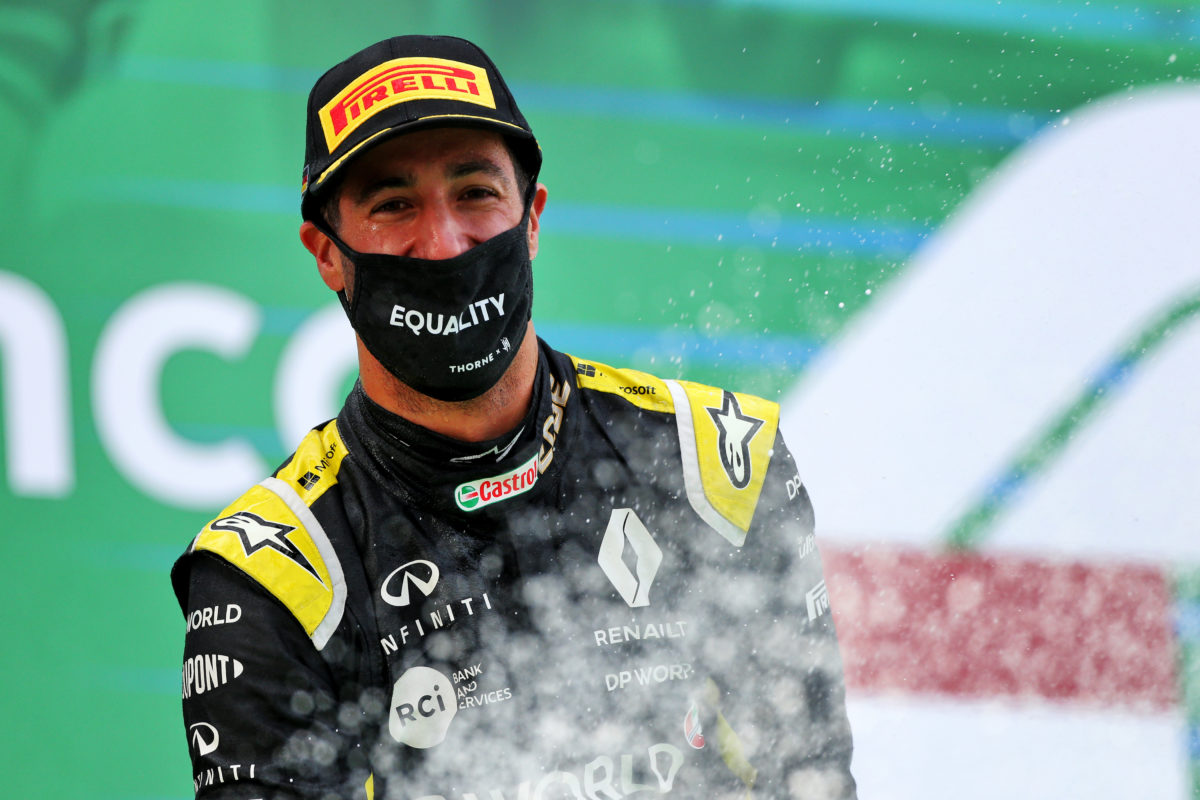 Daniel Ricciardo said third place in the Formula 1 Eifel Grand Prix felt like it was his first Formula 1 podium.

A total of 901 days had lapsed since his previous podium appearance, which came as victor at the 2018 Monaco Grand Prix.

“It actually, to be honest, it feels like the first podium all over again.

“I think it’s been two and a half years or something, and the feeling is really nice. It’s Fresh.

“Just so happy and honestly to see everyone as well, we’ve all waited a long time for this, so I think everyone’s going to soak it up.”

An early pass on Charles Leclerc for fourth set up the result, which was aided by Valtteri Bottas suffering power unit dramas in the opening third of the race.

Ricciardo then emerged victorious in a tactical battle with Sergio Perez, the pair on different strategies that threatened to see the Mexican challenge on track in the final laps.

A late Safety Car interrupted that plan, with both Renault and Racing Point stopping their drivers for fresh tyres.

On the same strategy to the flag as a result, Perez tried to capitalise as the Australian tried to force a mistake from Verstappen following the late Safety Car interruption.

The Australian driver hung on to the spot, dropping off the back of Verstappen but remaining clear enough of Perez.

It means Cyril Abiteboul will now get a tattoo, chosen by Ricciardo, to commemorate the team’s first podium since returning to the sport as a fully fledged constructor as a result of a bet between the two.

“We’ll have to do some thinking now (about the tattoo design), but probably something to do with me, but I think with a German flavour.

“This is obviously the place we did it, so a little tip of the hat to something traditional in Germany as well.”

Ricciardo now sits fourth in the drivers’ championship with 78 points to his name with six races remaining.

By contrast, the Australian banked a total of 54 throughout the entirety of the 2019 season.

Renault also remains firmly engrossed in the battle for third in the constructors’ championship, a three-way battle with Racing Point and McLaren that is currently covered by six points.

Formula 1 continues in two weeks with the Portuguese Grand Prix, the first since 1996, on October 23-25.