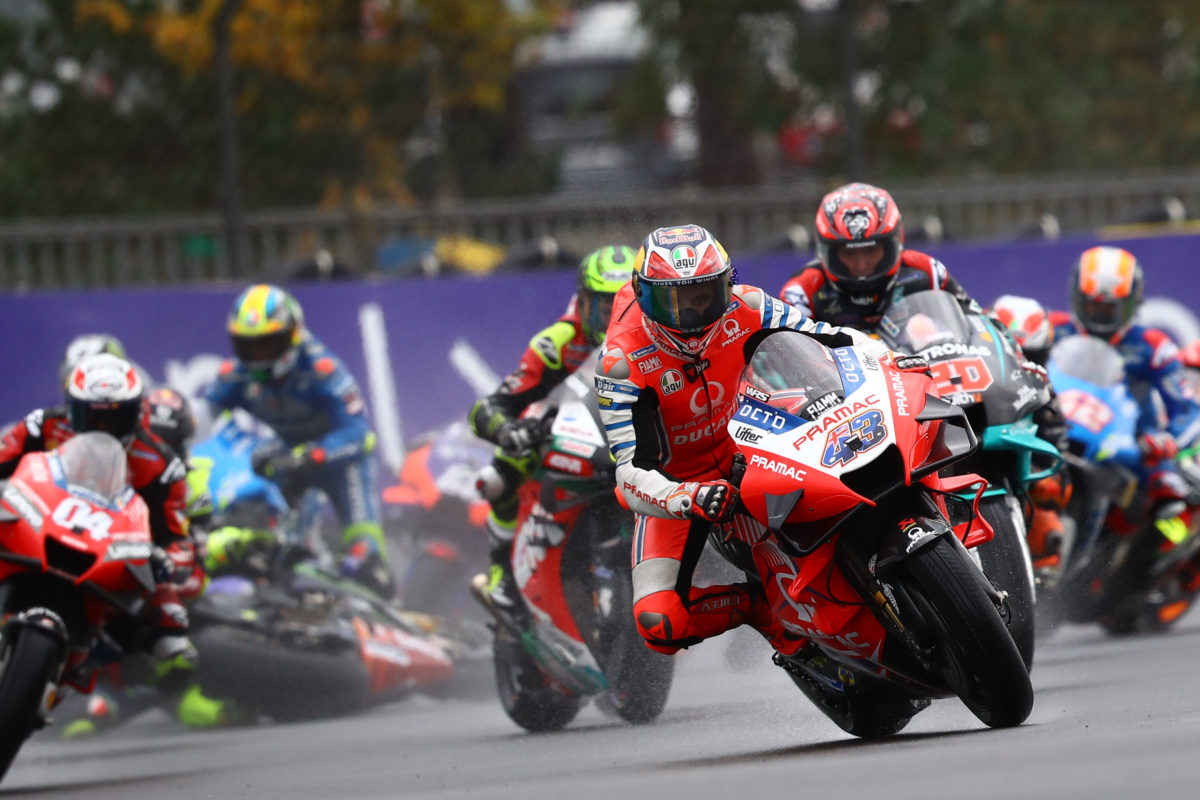 Jack Miller has revealed that pre-race rain forced him to swap to a bike which had already shown issues and ultimately took him out of the podium fight in France.

Miller led early at Le Mans and had just re-passed Alex Rins to move into second position on Lap 19 when his Ducati finally failed, consigning him to a DNF.

The engine problem had in fact become apparent in that morning’s Warm Up session but when rain began falling five minutes before race start was due, the Australian had to hop onto that bike and hope for the best.

An unusual schedule which saw MotoGP race earlier in the afternoon is also said to have played a part in the calamity.

“An issue with the engine,” advised Miller.

“It sort of sprung up in the Warm Up and then we swapped the bikes for the race and I was on the dry bike but then of course the rain came so I had to get back on the other bike.

“With the short schedule we had here today, there was no chance to try and fix the thing; we just sort of had to cross our fingers, and unfortunately we had an issue with it.

“They’ll have to send the engine now back to the factory and understand what the issue was.

“It was just one of those days.”

Miller said that there were signs during the race that the engine would give up, but he hoped that he simply had to adjust his mapping.

“I was already struggling a little bit there with speed,” recounted the Pramac rider.

“Rins passed me on the straight and then he outbraked himself (and) I got run into the thing (run-off).

“(I) just sort of thought it was electrical issues; swapped the map.

“We had quite a bit of spinning in a straight line, so I was on Map C – I swapped pretty early on in the race just to try and save the centre of the tyre on the straight – and then yeah, I thought it must have been traction control cutting in or something like that.

“(I) swapped the map back, got another couple of laps, but I was struggling a little bit on speed and the inevitable happened and it died on me.”

Miller is on his way to the Ducati Team next year and it was one of the works squad’s riders, Danilo Petrucci, who went on to take a second MotoGP victory while championship contender Andrea Dovizioso finished fourth on the other red bike.

The Australian is now seventh in the championship, 40 points from the lead.

It was a better outing for his compatriot in Moto2, with Remy Gardner finishing second in the intermediate class race.

The season continues at Aragon this coming weekend.