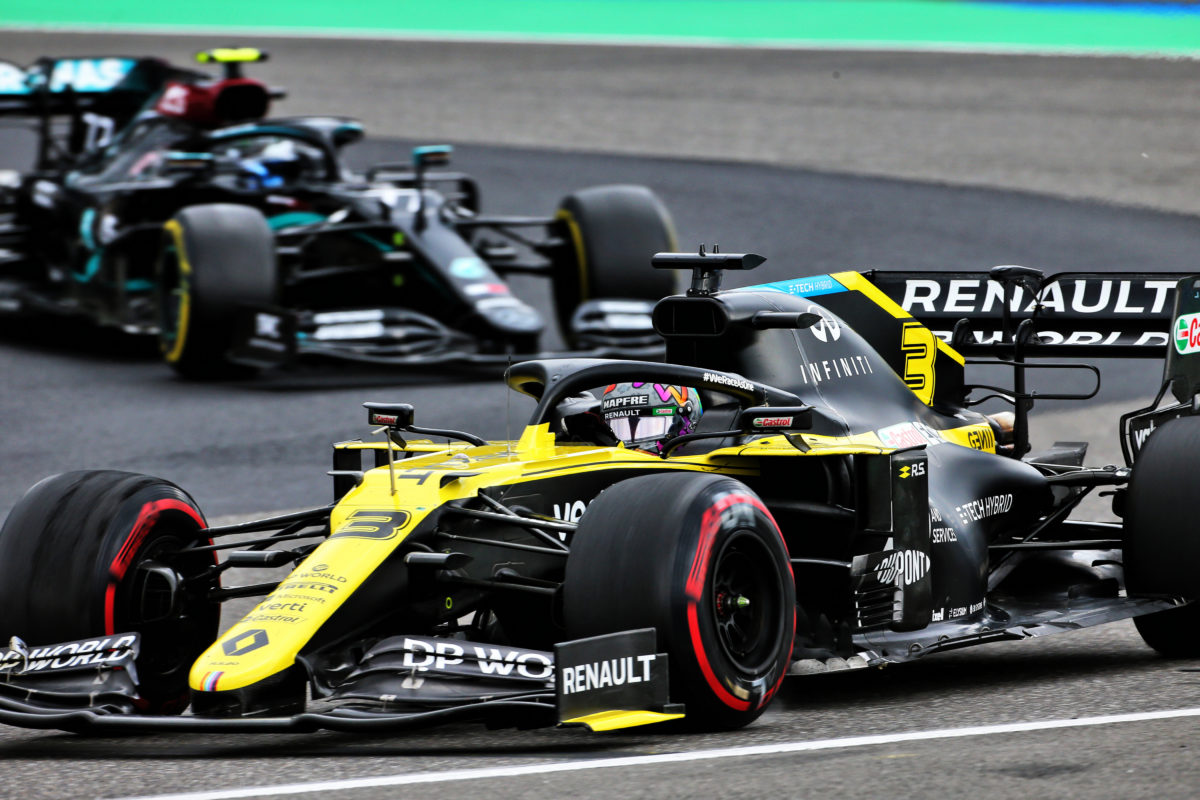 Hamilton headed Max Verstappen in a race punctuated by attrition, Ricciardo one of he key beneficiaries to take his first rostrum result since Monaco 2018.

It was not straight-forward for the Australian as he became embroiled in a strategic battle with Sergio Perez for third place.

A late Safety Car saw that become a wheel to wheel battle briefly before the Renault driver gained the upperhand.

Hamilton started strongly and took the inside line at Turn 1, only for pole sitter Valtteri Bottas to hold his nerve and maintain the advantage at Turn 2.

The Finn extended a 1.5s lead on the opening lap from his team-mate while Ricciardo found his way by Alex Albon to move up to fifth.

Also making progress was Nico Hulkenberg, who started 20th but rose 17th after a single tour.

In the early laps, Charles Leclerc was a rolling road block, the Ferrari dropping two seconds a lap to Bottas out front.

Ricciardo attacked the Ferrari driver as they began the sixth lap, though his attempts were fended off by his Monegasque rival.

Running fifth, Albon pitted after seven laps, swapping the soft compound tyres on which he’d started for a set of mediums.

The Ricciardo/Leclerc battle resumed on Lap 9, the Australian feigning at Turn 1 to force the Ferrari to go defensive.

That hampered his exit allowing Ricciardo draw alongside and ultimately make the move around the outside at Turn 3.

Leclerc soon pitted and rejoined the race in 19th after taking his stop just as team-mate Sebastian Vettel spun under braking for Turn 1.

With damaged tyres as a result of the off, the German took on a new set of hard compound tyres.

Having been chipping away at Bottas’ early lead, Hamilton capitalised on a mistake at Turn 1 to surge by the pole-sitter.

The Finn locked his brakes heavily approaching the first corner, sliding wide and opening the door for Hamilton to take the place.

Soon after, Williams’ George Russell had a spin while Bottas took to the lane having picked up a heavy flat spot.

Russell’s pirouette was the result of contact from Kimi Raikkonen, the Alfa Romeo pinching the rears with the resulting steering correction sending him into the Brit.

The incident was investigated, with Raikkonen picking up a 10s penalty as Russell was forced to park his damaged car.

Falling to fourth as a result of his stop, Bottas made short work of Ricciardo to reclaim third.

The Renault driver din’t fight for the place, realising they were on different strategies and electing not to cost himself time by battling with the former race leader.

A Virtual Safety Car on Lap 16 to clear Russell’s Williams came at an ideal time for Hamilton and Versatppen, who both took service.

A mistake from Daniil Kvyat as the VSC was withdrawn saw him bounce over the grass at the final chicane.

Albon pounced on the AlphaTauri to affect a pass, only to move back across in front of Kvyat too quickly, breaking the Russian’s front wing off in the process.

It happened as they braked into the final corner, Kvyat having to complete an entire lap before he could have the damaged spoiler replaced.

Bottas’ race went from bad to worse as he reported a lack of power from his Mercedes engine, and soon after his race was over after just 19 laps.

Esteban Ocon also struck issues, radioing to the pits that he lost brakes and the ability to change gears as he limped back on Lap 22.

After picking up a penalty for his clash with Kvyat, Albon was retired from the race on Lap 25 with a reported power unit problem.

The next in the list of drivers to report issues was Lando Norris, who complained of a lack of power and battery deployment.

Running fourth, Perez made it to Lap 29 before he stopped, followed in by fifth placed Carlos Sainz.

That saw the pair drop behind Ricciardo, who had stopped under the Virtual Safety Car some 14 laps earlier.

Norris pitted on Lap 30 and rejoined having taken only a new set of medium tyres as he persisted in his wounded McLaren.

A brief squabble between Perez and Leclerc was resolved in favour of the Mexican, making the move for fourth stick into the final chicane on Lap 35.

The Ferrari driver was soon in the pits for the second time, replacing his medium tyres with another set of the yellow striped rubber.

Hulkenberg’s cameo performance saw him rise to ninth on Lap 41, the German easily dispatching Sebastian Vettel under brakes at Turn 1 to take the place.

In the closing stages, attentions turned to the battle for third between Ricciardo and Perez.

With 16 laps newer tyres, the Racing Point driver sat 11 seconds behind the Renault and was reeling him in at more than half a second a lap.

After 43 laps, Norris pulled his car off the road at Turn 6, stopping near a marshals post well away fro the racing line.

The Safety Car was deployed as the car, while well off the racing line, was in an awkward position to recover.

Renault immediately reacted by fitting a set of roaded soft tyres to Ricciardo’s car, handing third to Perez briefly before Racing Point hauled him in a lap later.

Having been almost a lap down at points, the leaders found themselves running line astern once the lapped runners were released.

In theory the Safety Car could have been withdrawn at the end of Lap 48, the incident having been cleared and lapped runners all released.

Instead it remained out for a further tour, affording those who’d been released the opportunity to catch the queue for the restart.

Hamilton got away well as racing resumed on Lap 50, pulling clear of Verstappen who was immediately attacked by Ricciardo.

The Australian wasn’t able to make a move stick and quickly came under pressure from Perez who was also unsuccessful in his attack.

A string of fastest laps saw Hamilton eke back out his advantage over Verstappen in second and with five laps to run the gap had grown to 2.7s. Ricciardo was 6.3s back in third, himself holding a 1.7s advantage over Perez.

Hamilton went on to claim his record-equalling 91st world championship grand prix win from Verstappen, who claimed fastest lap on the final lap.

In championship terms, Hamilton holds a 69 point buffer over Bottas, with Verstappen now just 14 points away in third.

Six races remain in the 2020 Formula 1 season, with the Emilia Romagna Grand Prix at Imola in two races time the earliest Hamilton could wrap up his seventh title.

F1 has a week off now before heading to Portugal for the first time in a generation where it will race at the Algarve International Circuit in Portimao circuit on October 23-25.