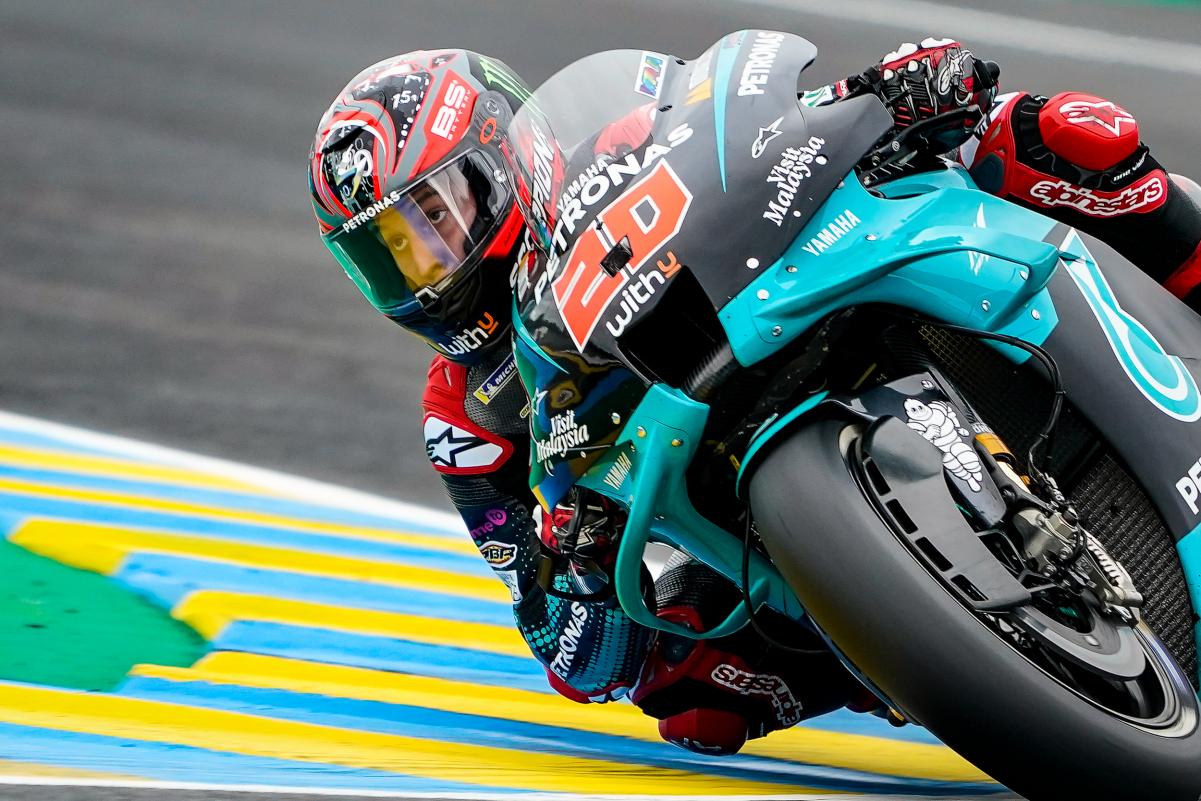 Fabio Quartararo has denied Jack Miller pole position for the French MotoGP with a last-gasp effort.

Miller had gone to the top with a 1:31.537s just before the chequered flag flew in Qualifying 2 at Le Mans, but the championship leader still had enough to ride his Petronas SRT Yamaha to a 1:31.315s.

There will be two Ducatis on the front row with Danilo Petrucci coming from Qualifying 1 to put his factory entry on the other side of Miller courtesy of a 1:31.674s, which the Italian set just before Quartararo’s final effort.

Maverick Viñales (Monster Energy Yamaha) went early for his second run but initially could not find an advance on the fourth position which he held when the track went quiet.

Andrea Dovizioso, on the other hand, rode his Ducati Team entry to a 1:31.747s to take up second spot.

His was the only real change to the pointy end of the grid, notwithstanding improvements in lap time for Morbidelli and Viñales, until the final minute of 15.

That was when Cal Crutchlow (Castrol LCR Honda) jumped from ninth to second with a 1:31.686s then Miller, who had shaken off a highside in Free Practice 3, fired in the time which elevated him from 10th to provisional pole.

Viñales moved back to fourth with a 1:31.719s just before the chequers, then Dovizioso bettered his time but not his position in clocking a 1:31.722s.

Petrucci subsequently moved to third, meaning Quartararo was still on the middle of the front row until he punched out a lap 0.222s quicker than Miller’s best.

Row 2 will be Crutchlow, Viñales, and Dovizioso respectively, with Row 3 headed up by Bagnaia from Pol Espargaro (Red Bull KTM Factory) and Johann Zarco (Esponsorama Ducati).

The Portuguese rider looked in danger of wasting his Q2 berth entirely, having suffered an apparent engine failure during Free Practice 4 and crashed his second bike once the oil he dropped was cleaned up and the session restarted.

Joan Mir’s championship hopes took a hit when he missed out on the top two in Q1.

The Spaniard was bumped by Bagnaia in the final minute of the session before being relegated further to 14th when Takaaki Nakagami (Idemitsu LCR Honda) pipped him by 0.008s with a 1:32.179s.

Mir’s Suzuki Ecstar team-mate, Alex Rins, qualified 16th while Alex Marquez ended up 18th on the grid and Stefan Bradl 21st on the other Repsol Honda.