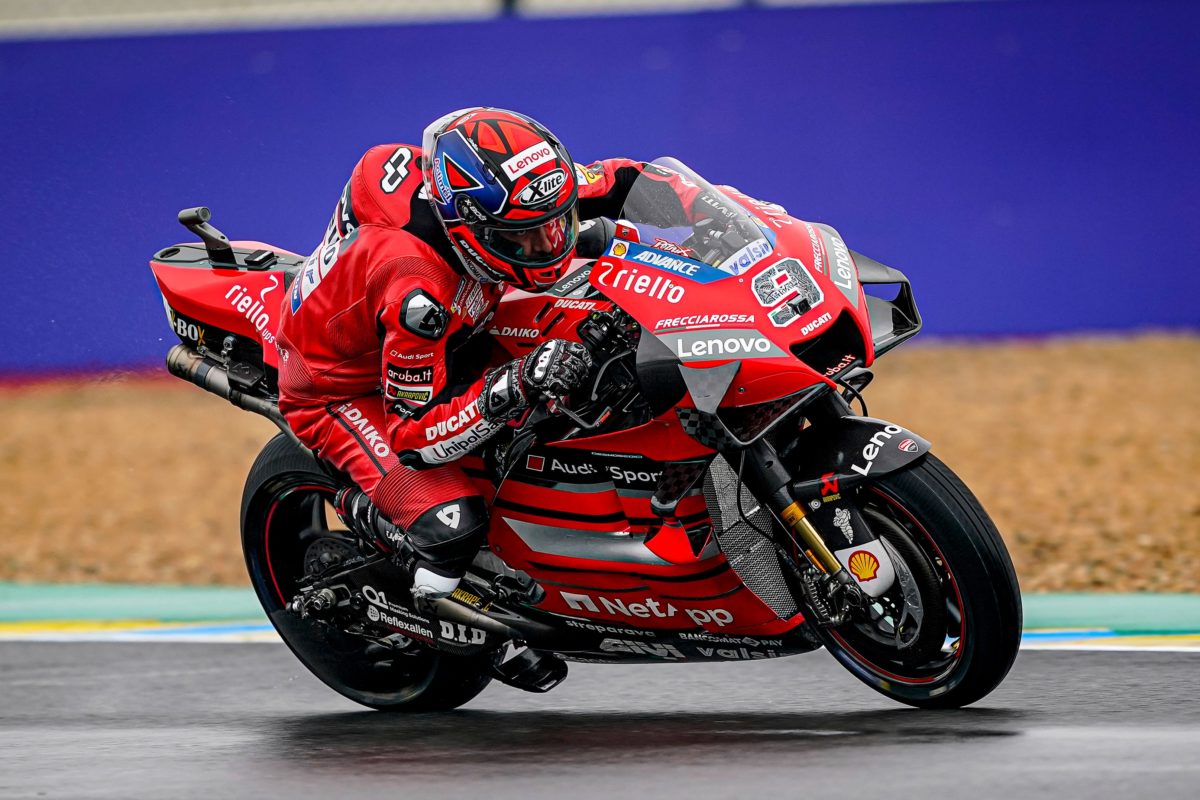 Danilo Petrucci has notched up a second MotoGP race win while Alex Marquez finished on the podium for the first time in the premier class at a wet Le Mans.

Petrucci led for most of the 26 laps on the #9 Ducati Team entry with Marquez coming all the way from 18th on the grid to take the chequered flag 1.273s behind and Pol Espargaro claiming third in the French Grand Prix.

On the second factory Ducati, Andrea Dovizioso dropped out of the podium places in the final laps having briefly held first position but still made ground on his title rivals with a result of fourth.

That was because Fabio Quartararo, Maverick Viñales, and Joan Mir ended up embroiled in a final-lap battled for ninth, which was resolved in that order.

Jack Miller spent much of his time on-track in third spot and had just passed Alex Rins for second when his Pramac Ducati suffered a mechanical failure on Lap 19.

All 22 riders had opted for soft slicks front and rear but rainfall inside five minutes to race start led to a slight delay in order to change to wets.

The showers stopped on the warm up lap before Miller made the best launch of the three on the front row and prevailed over a fast-starting Cal Crutchlow (Castrol LCR Honda), who qualified fourth, when they arrived at Turn 3.

Valentino Rossi went down in the pack when he lost the rear end of his Monster Energy Yamaha, forcing team-mate Viñales wide as well as Suzuki Ecstar’s Mir, while Crutchlow quickly dropped back.

Instead, it was Dovizioso relieving pole-sitter Quartararo (Petronas SRT Yamaha) of second spot at Le Musee, only to be passed by team-mate Petrucci off Garage Vert.

Petrucci got Miller at Garage Bleu and led at the end of the standing lap, from the Australian, then Dovizioso, Quartararo, and Espargaro (Red Bull KTM Factory).

When Miller ran wide at Turn 3 next time around, Dovizioso rode through the gap, but those three Ducati riders still enjoyed a comfortable margin over the field.

Rins (Suzuki Ecstar) qualified only 16th but gained seven spots on the first lap and passed Crutchlow for sixth on Lap 2.

The Spaniard made light work of Quartararo but had to genuinely fight to pass Espargaro for fourth on Lap 4, as the Ducatis moved to almost three seconds clear.

Rain began to fall again on Lap 9 but that was no hindrance to Rins, who was onto the rear of #43 for laps later.

After one unsuccessful attempt at a pass, the Suzuki man got ahead of Miller on Lap 15, but only for a few corners.

Dovizioso went by Petrucci to lead for the first time at the start of Lap 18 but was fourth by the time they exited Chemin aux Boeufs after Rins made a lunge at the three Ducatis and Miller rode around the outside to take up third, behind #9 and #42.

The wild moment allowed Espargaro and Marquez (Repsol Honda) to close up to Dovizioso, who was soon back into the rostrum positions with Miller’s misfortune.

When Rins went down at Turn 3 on Lap 20, #04 was back up to second spot, albeit more than two seconds behind Petrucci.

The margin briefly jumped to almost three seconds but, with the rain ceased and the track drying, was back to 1.8s when Marquez got Dovizioso through La Chapelle on Lap 24.

Espargaro relieved a #04 Ducati which was wanting for rear grip of third position on the penultimate lap, and Miguel Oliveira (Red Bull KTM Tech3) took the opportunity to attack Dovizioso as well.

He briefly headed the title contender but Dovizioso power back past off Garage Vert on Lap 25 and remained fourth thereafter.

Up the road, Petrucci took the chequered flag 1.3s to the good over Marquez, with Espargaro less than half a second further back.

Johann Zarco (Esponsorama Ducati) put a move on Oliveira at Raccordement with just over a lap to go and they went on to finish fifth and sixth respectively.

Quartararo gave up positions at regular intervals until he was running as low as 11th for most of the period from Lap 6 until Lap 18, when he benefited from Rins’ spill.

It was something of a head-to-head championship battle when Mir went through at Garage Vert on the final lap but Quartararo got him back at Chemin aux Boeufs and that helped Viñales snatch 10th.

The wash-up is that the Frenchman retains the championship lead by an expanded 10 points over Mir, with Dovizioso eight points further back in third.

Rins got back on his bike but go no points for his toil after the crash given he finished 16th.

He was the last to make it to the end, with five of the six retirements due to crashes, including Franco Morbidelli (Petronas SRT Yamaha).

The season continues at Aragon next weekend.