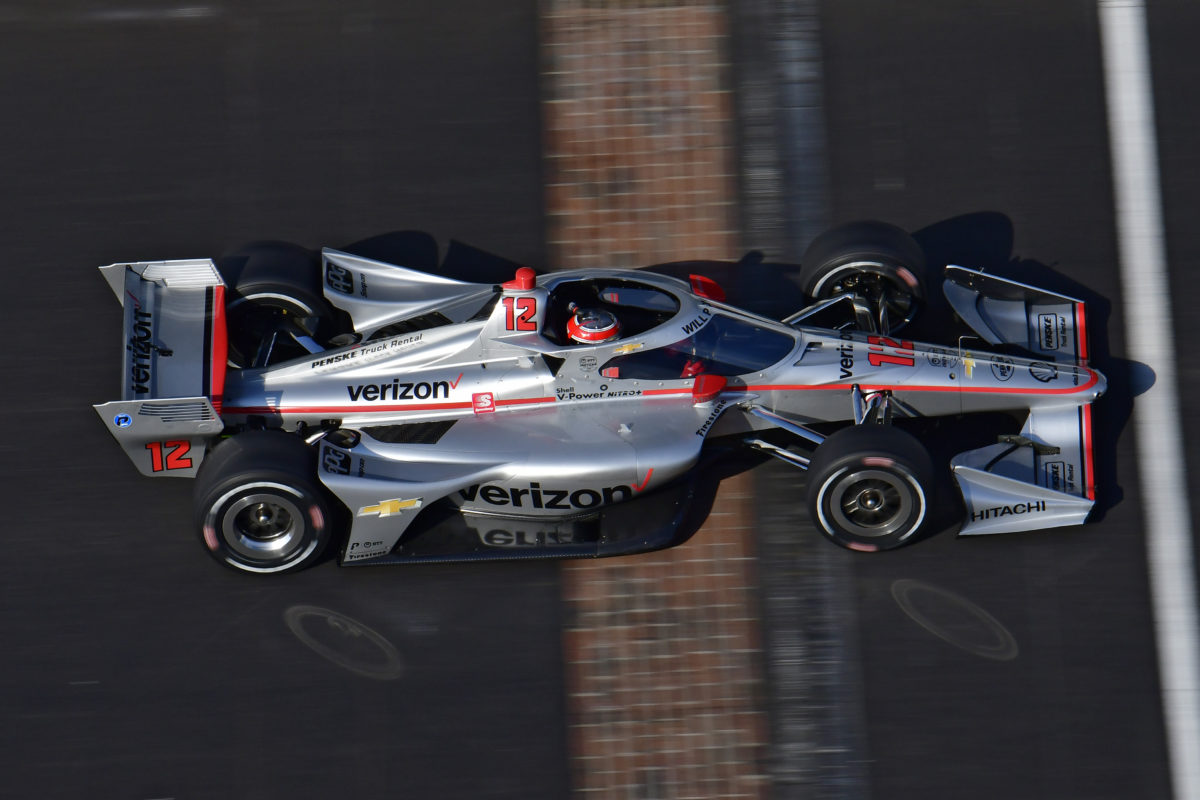 Will Power has survived late-race pressure from Colton Herta to win on the Indianapolis road course as Josef Newgarden made more inroads on Scott Dixon’s series lead.

Power led all 75 laps of the penultimate race of the season but had Herta on his tail for the final 10 laps, with Rossi going from a threatening second himself to a distant third by the end.

That meant a Team Penske sweep of the Harvest GP double-header after Newgarden won a day earlier, and the two-time champion enhanced his chances of a third title by finishing fourth.

If he is to achieve that in 2020, he will have to overturn a 32-point deficit to Dixon, who drove from 15th on the grid to eighth despite early contact with Ryan Hunter-Reay.

Power had qualified on pole and made a good launch which allowed him to take a clear lead over fellow front row starter Herta (Andretti Harding Steinbrenner Autosport) to the first corner.

Newgarden started ninth but he and Dixon (Chip Ganassi Racing) were together after the first lap, in 11th and 12th respectively, the former on red alternate tyres and the latter on black primary rubber.

Newgarden took over 10th when he passed Hunter-Reay (Andretti Autosport), the only man who started on black tyres in the top nine, with a clean move on Lap 3 at Turn 12.

Dixon, on the other hand, copped underwing damage when #9 and #28 hit as he went around the outside of Hunter-Reay on Lap 7 at Turn 7.

Between that and the fact that he started on black tyres versus Felix Rosenqvist’s reds, Dixon was then caught by his Chip Ganassi Racing team-mate but the Swede stayed behind.

Meanwhile, Newgarden’s progress continued and he was into the top five when he passed Alex Palou (DCR w/ Team Goh) on Lap 21.

In the leading Team Penske car, Power took almost 13 laps to stretch his lead to one second, but was more than three clear of Herta on Lap 23, at which time Andretti Autosport stablemate Rossi and McLaren SP’s Pato O’Ward were lurking behind #88.

Given the race length, 10 laps shorter than the previous afternoon’s encounter all went for three-stoppers, the vast majority were setting up for a two-stop strategy.

As such, several including Rossi, Newgarden, and Dixon filed into the lane at the end of Lap 25, exactly one-third of the way through the race, while Power was more than seven seconds up on Herta when they took service together a lap later.

Although the stops did not shake up the order dramatically, Herta did not have the tyre temperature to fight off Rossi on his out lap and the 2016 Indianapolis 500 winner rounded him up at Turn 7.

That meant Power led Rossi, by about six seconds at that time, from Herta, O’Ward, and Newgarden, all on black tyres.

Dixon was 12th, on reds, but effectively 10th given Helio Castroneves (McLaren SP) and Hunter-Reay were off-sequence and set for three-stoppers.

The Kiwi was officially 10th when Rosenqvist attacked Charlie Kimball (AJ Foyt Racing) just up the road on Lap 27, the contact which ensued putting both on the grass.

Rossi had reduced Power’s lead to 5.1s on Lap 30 while Newgarden was tailing O’Ward by five laps later.

No pass transpired on the road before Newgarden made his final stop on Lap 50 and switched from blacks to reds, one of which was new and the other three scuffed.

The four who were ahead of him pitted on Lap 51, as did Dixon from an effective eighth position, with Power also going from blacks to 25 percent new reds.

Rossi stayed on the primary compound and was still a little more than three seconds in arrears of the leader, with Herta an effective third.

O’Ward emerged ahead of Newgarden but, try as he might to hold the spot, lost the effective fourth to Car #1 through the Turn 7/Turn 8 complex on his out lap.

Dixon was eighth for the run home once those off-strategy got their pit stops out of the way, with #9 and all ahead except Rossi on the red alternate tyres.

Even then, Rossi was catching Power early in the stint, bringing the gap well under two seconds on Lap 57 and barely more than one second when the race ticked past Lap 60.

However, it would not be Rossi that would cause Power serious grief, given he was outbraked by Herta with 11 laps to go at Turn 1.

Herta was soon hassling the 2018 Indianapolis 500 winner and not much more than half a second was the difference on Lap 69.

Power appeared to be struggling to clear Castroneves, who was running outside the top 20 but just up the road, and even remarked of the man with whom he ordinarily shares the Penske stable, “You’ve got to help me here.”

The Brazilian released them on the Hulman Straight on Lap 70 but the leader still could not shake Herta as the push-to-pass advantage swung to the youngster’s favour.

However, Power hung on to claim his second win of the season, officially by 0.8932s, with Rossi taking the chequered flag more than five seconds further back in third.

Newgarden was 3.4s behind Rossi and 9.6s behind his race-winning team-mate, while O’Ward was just a few tenths back in fifth.

The final race of the season is the Grand Prix of St Petersburg, which takes place in three weeks’ time.