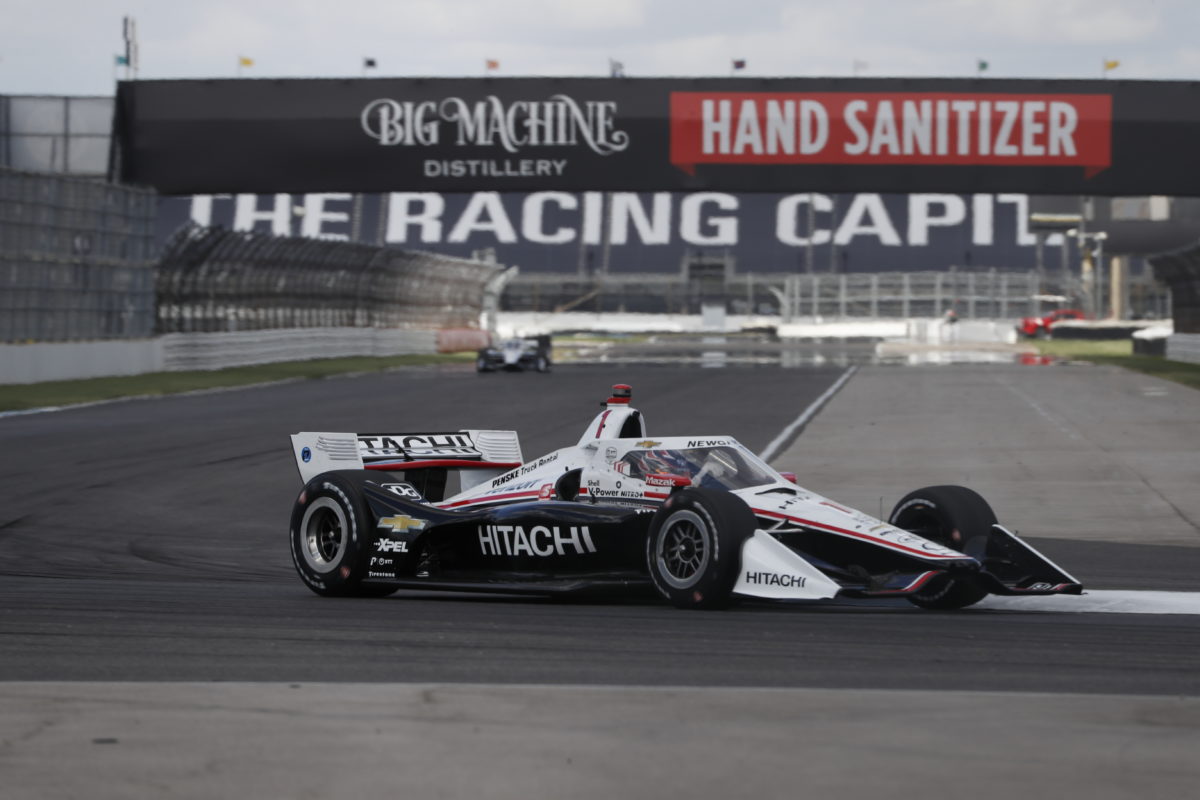 Josef Newgarden has made big inroads on Scott Dixon’s IndyCar Series lead with a win on the Indianapolis road course.

Newgarden had vied for top spot for much of the 85-lap encounter while Dixon’s afternoon was realistically about damage limitation after he qualified 12th.

The five-time champion ran as high as fifth outside the pit stop cycles and looked on for a finish of seventh before he ran off on the penultimate lap and dropped to ninth, where he remained until the chequered flag.

The result means that the gap between the Chip Ganassi Racing driver and his Team Penske title rival is now 40 points with two races to go, including another at the Brickyard tomorrow.

When the green flag flew, it was Colton Herta (Andretti Harding Steinbrenner Autosport) sweeping into the lead on the outside of the first corner.

However, he had started on the black primary tyres and could not resist VeeKay when the Dutchman attacked on Lap 2 with the advantage of the red alternate hoops.

VeeKay built his lead as Herta came under pressure from Newgarden, who had also started on reds, while Dixon briefly dropped as far back as 13th before jumping back from 12th to 10th on Lap 9.

That was thanks to an incident between Santino Ferrucci (Dale Coyne Racing w/ Vasser-Sullivan) and Ryan Hunter-Reay (Andretti Autosport), who clashed and went around when the former tried to pass the latter through Turns 1 and 2.

Herta was about 5.6s behind VeeKay, but had shaken Newgarden, when he pitted from second on Lap 13 and traded black tyres for reds.

Dixon effectively still held 10th when he changed from primaries to alternates on Lap 14 and Newgarden had closed to around 3.8s behind VeeKay when the leader stopped at the end of Lap 16 to switch to the black-walled tyres.

Herta quickly caught VeeKay and, after one unsuccessful attempt at a move when he locked a brake at Turn 1 on Lap 21, got the spot six corners later.

Newgarden and Team Penske team-mate Power, the latter of whom had sat fourth before the stops began, pitted from first and second on Lap 21, with both switching from alternates to primary tyres.

The former rejoined ahead of Herta but ceded the effective lead when the Andretti Autosport driver used his tyre advantage, and push to pass, to make the move at Turn 1 on Lap 24.

Once the cycle was complete, it was Herta by around 2.5s from Newgarden, VeeKay, Rossi, Felix Rosenqvist (Chip Ganassi Racing), Dixon, and Power, who reportedly had an issue in the lane.

Rosenqvist let Ganassi team-mate Dixon go on the back straight on Lap 28 while Herta was almost 2.7s up on Newgarden when he pitted and took scuffed reds at the end of Lap 37.

Dixon was still an effective fifth when he took service for a second time on Lap 38 and went back to black tyres before being overtaken by Rossi, who stopped slightly earlier, on his out lap.

Power pitted on Lap 39 and Newgarden on Lap 43, both going back to reds, while Race Control advised Rossi he would have to hand the position back to Dixon due to breaching track limits.

Dixon did clear the #27 Honda into Turn 1 on Lap 44 although he locked up under brakes and very nearly invited Rossi back underneath him.

Power and Rossi both attacked Dixon as Lap 44 turned into Lap 45 and it was the Australian emerging in fifth, from Rossi on black tyres in sixth and then Dixon in seventh.

Newgarden, meanwhile, had caught Herta and hardly had to make a pass when #88 locked up and ran long at Turn 1 on Lap 60.

Herta pitted immediately and switched to black tyres for the run home, while Newgarden made the same change a lap later.

VeeKay and Dixon were also in with Newgarden, both for reds, while Power and Rossi ran a lap longer again.

Rossi (alternate) quickly cleared Rahal also, and had a push-to-pass advantage over several up the road, while Dixon was eighth.

Power had a huge moment as he re-entered the speedway section at the end of Lap 69, just catching the slide before he would have trowelled #12 against the wall but dropping position to VeeKay and Rossi.

Newgarden’s lead was 7.5s at the end of Lap 70, during which Rossi passed VeeKay for fourth, before Rosenqvist started to hassle Herta for second.

As #88 watched his mirrors, #1 moved beyond 10 seconds to the good on Lap 76, and Dixon got Rahal for seventh at Turn 1 with the assistance of push-to-pass on Lap 77.

Rossi did much the same to Rosenqvist two laps later, handing a brief reprieve to Herta in the process, before #88 was rounded up by #27 on Lap 81 at Turn 7.

Just behind, a handful of corners after, VeeKay took advantage of a slide for Rosenqvist to claim fourth, then moved by Herta on Lap 82.

Dixon was seventh when he pinched a brake at Turn 7 on Lap 84 and ran onto the grass, giving up position to Rahal and Jack Harvey (Meyer Shank Racing), and that was how they ran to the chequered flag.

Newgarden won by 14.3s ahead of Rossi, with VeeKay another 0.7s in arrears.

Herta finished 1.4s away from the podium, Rosenqvist was fifth all told, and Power wound up sixth.

Marcus Ericsson (Chip Ganassi Racing) rounded out the top 10, James Hinchcliffe was 14th in the Andretti Autosport entry vacated by Zach Veach, and Helio Castroneves finished a lap down in 20th in his first start in the #7 McLaren SP car normally steered by Oliver Askew.

Qualifying for the penultimate race of the season takes place tomorrow from 00:20 AEST, followed by that 75-lap race itself at 05:31 AEDT (Daylight savings changeover for selected states/territories).