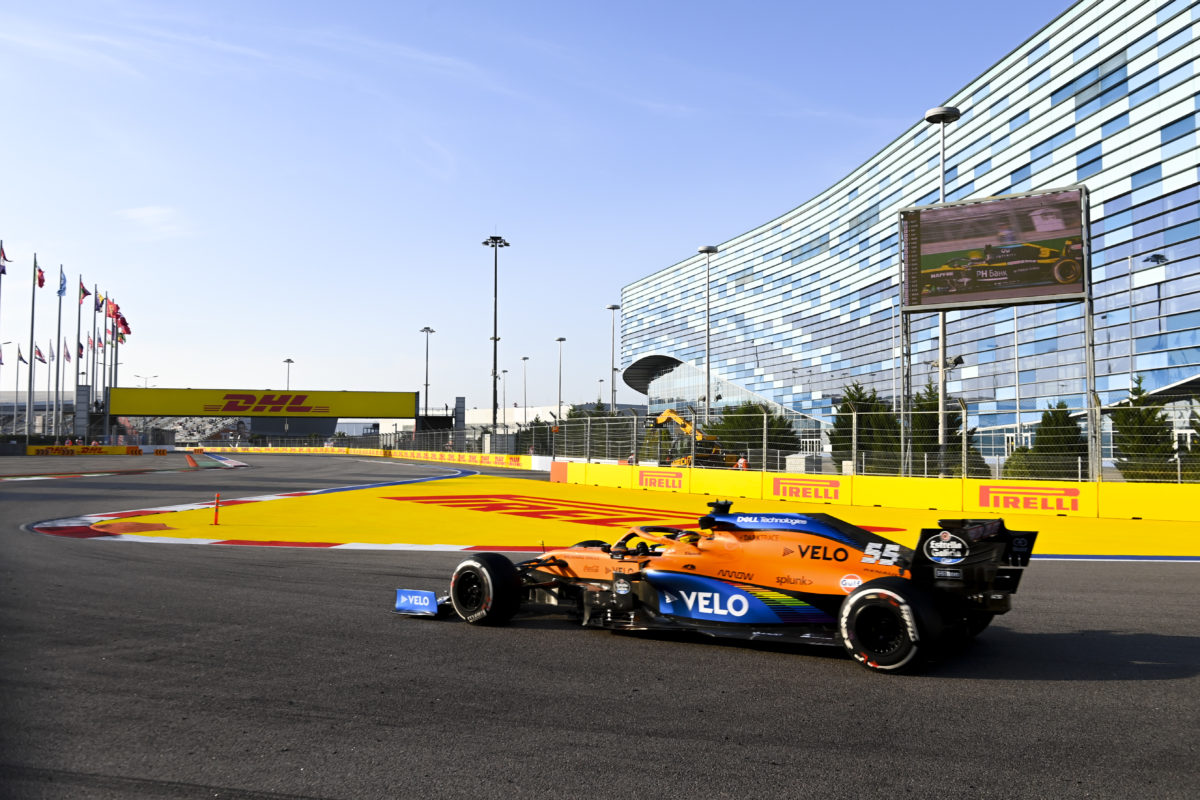 Carlos Sainz at Turn 2 in Sochi

Daniel Ricciardo is one of a number of drivers who’ve suggested changes to Turn 2 in Sochi could help improve the racing and avoid incidents.

The first braking zone on the circuit, the 90 degree right-hander feeds immediately into the long sweeping left-hand Turn 3.

It’s proved a hot spot for incidents, with a number seen over the course of the Russian Grand Prix on Sunday.

Those started with Carlos Sainz, who was an opening lap retirement after clouting the barrier while attempting to traverse a bollard chicane which marked the defined rejoin path.

“It’s not a very nice corner to drive around, and it generates these kind of situation, but I just misjudged it,”  the Spaniard admitted following his retirement from Sunday’s race.

“It’s still not a corner that is well designed.

“You saw today in the race just how many people are missing that apex, and having to around the bollards, destroying the bollards, it’s clearly not a great corner.”

Ricciardo received a five second penalty for running over the back of the exit kerb midway through the race.

The Australian has suggested changes to the corner could avoid such issues in future and even improve the racing.

It’s been suggested that the profile of the corner be reworked to reflect the Turn 1-2 sequence in Bahrain, transforming the 90 degree corner into more of a hairpin.

“I think to be honest Turn 2, a few of us drivers have been vocal,” Ricciardo said.

“I think they could do something better with it in general, I think even just to allow more overtaking for example, maybe a different shaped corner, less of such a short apex.

“They’ve got quite a bit of room to play with.

“We (drivers) have talked about it in the past, and maybe that would also eliminate the issue that we’re having with this, this cut through etc.”

The Renault driver explained that the current shape of the corner made it difficult to avoid a penalty under racing conditions.

“The geometry is weird. My situation, for example, I locked up so I was like, ‘It’s gonna be tight’,” he explained.

“But it’s just the way it’s shaped, it leaves you with hope until the very last minute, or that very last second, I should say.

“By the point you’ve committed (to the corner), you can’t really go back across (to the cut through), you’d lose probably more than five seconds.

“So I guess there’s that point of no return, and obviously I’d got to that and I just said, ‘Alright, I’ll just go and if I get a penalty, then obviously I’ll suck it up’.”

The corner is an acknowledged pinch point by the FIA, with Race Director Michael Masi admitting there’s always room for improvement.

“Turn 2 has been one of those that’s been a challenge in different ways each year,” he said.

“You fix things in one way, and it has another impact.

“So we’re trying to find the best solution, and I think we’ve found a reasonable solution.

Masi was also asked whether a gravel run off could solve the issue.

“As I’ve said a number of times that there’s different solutions for different circuits, different corners, taking everything into account,” he said.

“Gravel is not a solution everywhere.

“With regards to speeds in run-offs, one of the things that obviously we’ve tried to achieve and aim to achieve is primarily that the rejoin in such circumstances is effectively funnelled in a way that it’s as safe as possible. That’s the primary objective.

“Secondary is to slow cars down if possible within that area.

“However, the nature of Turn 2, because of literally the nature of the corner, it’s very hard to find a one-size fits all solution.

“We’ll continue looking at it, and see what we can do.”