Zarco: No way to avoid taking out fellow Ducati

Zarco: No way to avoid taking out fellow Ducati 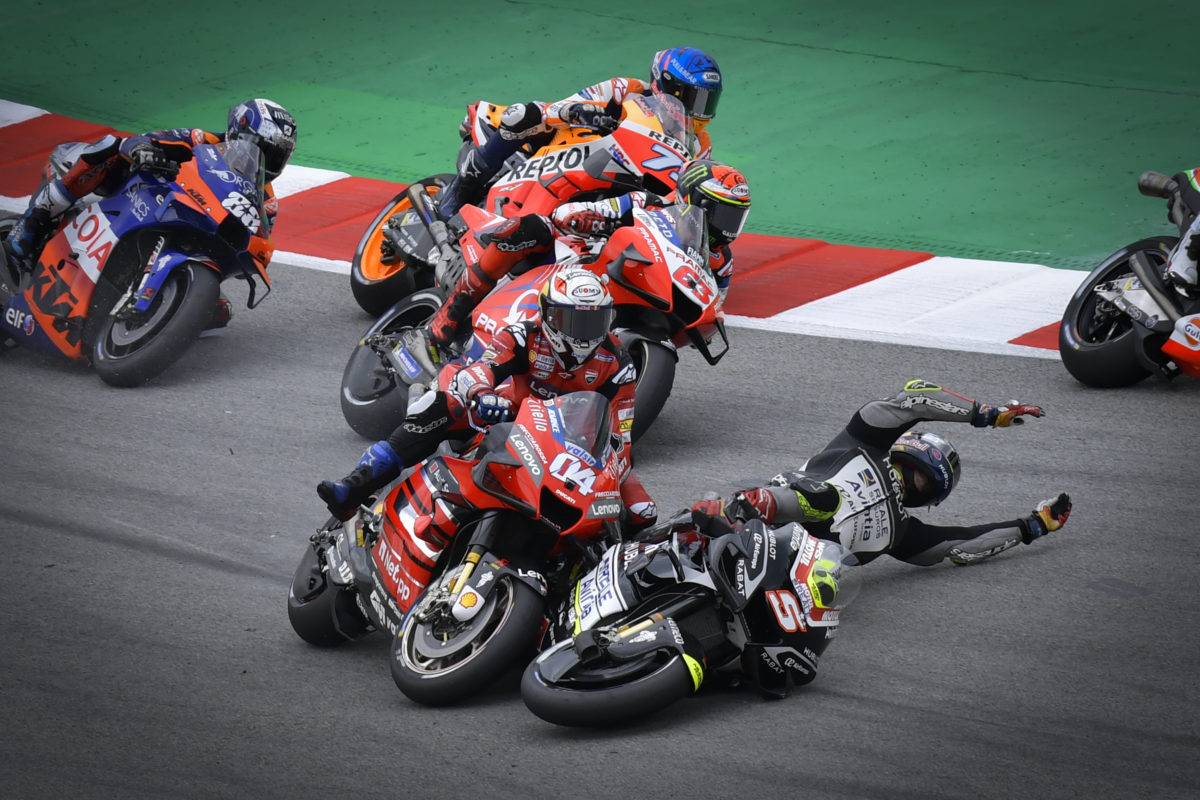 Johann Zarco admits that he had no choice but to take out one of his fellow Ducati riders in Catalunya, having collected pre-race championship leader Andrea Dovizioso on the first lap.

Ironically, it was factory rider Danilo Petrucci’s moment at Turn 2 which caused Zarco to prop and lose the front end of his satellite Esponsorama Ducati.

Worse still, when the Frenchman went down, he also wiped out the other factory-entered machine on which Dovizioso had made a strong launch from 17th on the grid.

That meant that #04 was almost guaranteed to give up the top spot in the standings having arrived in Barcelona a single point clear of Fabio Quartararo, who would go on to win the race.

“(I am) Pretty sad about today,” said Zarco.

“The weekend was going pretty well and I could expect good things for the race, and finishing the race at the second corner is really giving pain to the brain, to the stomach.

“I think the start was correct from my side. Danilo did a really amazing braking at Turn 1 and he overtook me, and then he changed direction and almost fell down because the temperature on the left is very cool and we have to be very careful.

“I just reflexed to not touch him, I was braking and I crashed. The problem is, when I crashed, Dovi could not avoid me and we are two Ducatis on the floor, and of all the ones it’s Andrea who is playing for the championship.

“This gives me a sad feeling today and I think if I didn’t touch the brakes I would have hit Danilo and it would have ended in the same way.”

Dovizioso initially appeared incensed at Zarco as he sat in the gravel trap but believes that it was simply a racing incident.

He was nevertheless frustrated, in part as a result of seeing the pace which Francesco Bagnaia displayed in finishing sixth.

“I think my pace in practice wasn’t too bad and I think the pace was very similar to Pecco (Bagnaia) and at the end of the race he was really fast,” said the Italian.

“So, I don’t know if he found something or if that was possible. It was important to make a good start, and I did it, so I was very happy about that and nothing (else) to say.

“It was a racing incident, so nothing to say about that. I am very disappointed especially when something like that happens you feel very frustrated because you couldn’t try anything.

“For the championship we lost a lot of points today.”

The next round takes place at Le Mans on October 9-11.