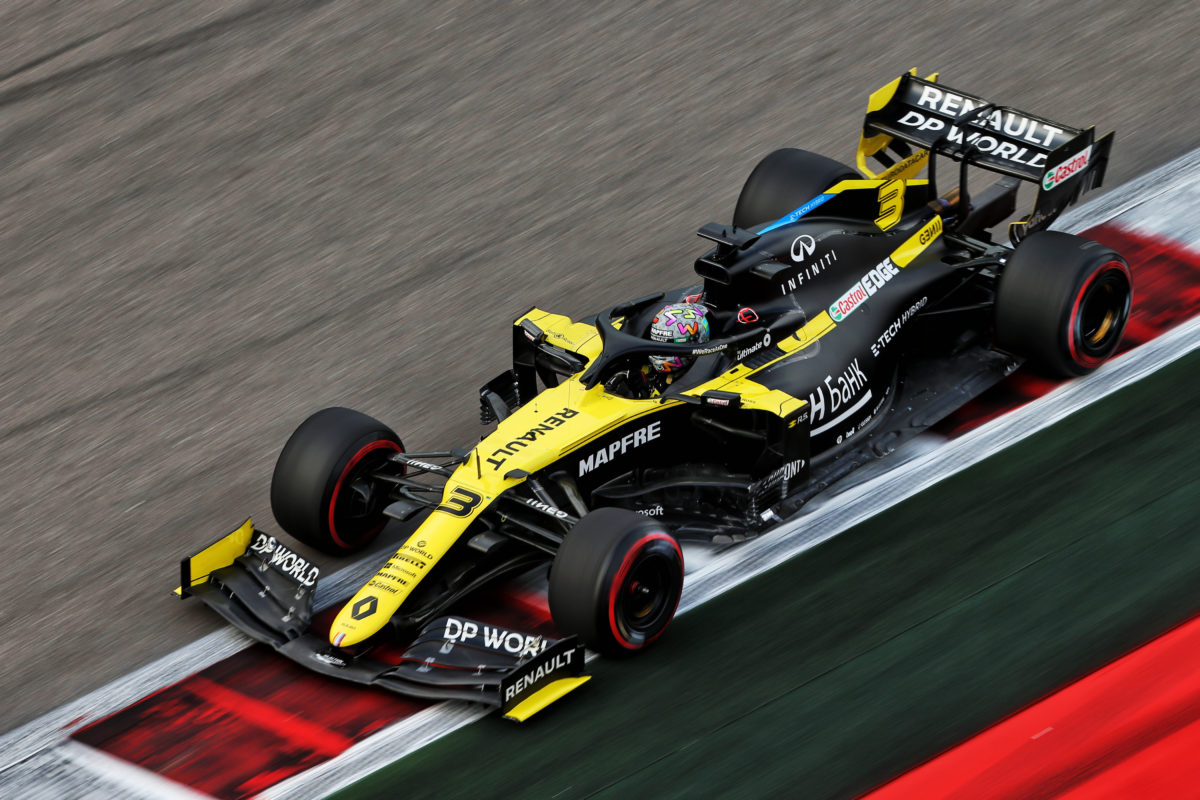 Daniel Ricciardo has taken responsibility for a mistake at Turn 2 during the Formula 1 Russian Grand Prix that saw him slapped with a post-race time penalty.

Ricciardo sat third after the start but fell to fifth before the end of the opening lap.

Following his pit stop, the Australian found himself in a train behind Sebastian Vettel and Esteban Ocon.

A call from the Renault pit wall orchestrated Ocon aside on Lap 24.

The Frenchman pulled to the right on approach to Turn 2 leaving the racing line clear for Ricciardo to move by.

However, a pinched brake saw him skate long of the apex, running over the back of an orange painted kerb on corner exit.

Specified in the Race Director’s notes, drivers passing behind the orange kerb were instructed to return to the circuit via a polystyrene slalom, which Ricciardo did not do.

Investigated by the stewards, he was handed a five second time penalty for the transgression.

“I’m pleased with the result today and it’s a decent one for the team as well,” Ricciardo said.

“I had a great start and got up to third in the first few corners before falling back to fifth.

“The race then changed on the hard tyres, we had good pace but obviously I made the mistake getting past Esteban into Turn 2 and had the time penalty.

“I locked the front brakes, so I take responsibility for that, but I was able to put that mistake right and recover well.”

Despite the incident, Ricciardo maintained fifth at the flag after extending a big enough gap to negate the impact of the penalty.

“I’m pretty happy with my day, and the end result, as we take home some good points,” he said.

“The car is working well, and reliability is good, so everything has come together nicely for us.”

Ocon ended the race seventh, which helped Renault record a combined 16 points across its two drivers.

“When we put on the hards, the car was not the same.

“It was a bit tricky to drive and I was struggling with grip and balance and I just wasn’t as happy as I was on the softs.

“I was almost following Max (Verstappen) on the softs at the beginning of the race, so that’s something for us to review there.

“Potentially, more points were possible, but we’re still happy with the result and how our race went.

“We know the car is quick and that’s good for future races.

“We’re going in the right direction; we’re catching the guys in front and that’s the target for the Constructors’ Championship. We’re getting there.”

Renault remains fifth in the Constructors’ Championship though the margin between it and McLaren in third has diminished.

Carlos Sainz was an opening lap retirement for McLaren, an incident which also hindered Lando Norris in the sister car as he had to take avoiding action.

He ultimately trailed home out of the points in 15th as a result, leaving the team on 106 points in the title race.

Racing Point moved to 104 courtesy of fourth place for Sergio Perez, with Renault now on 99.

Formula 1 next moves to the Nurburgring for the Eifel Grand Prix on October 9-11.