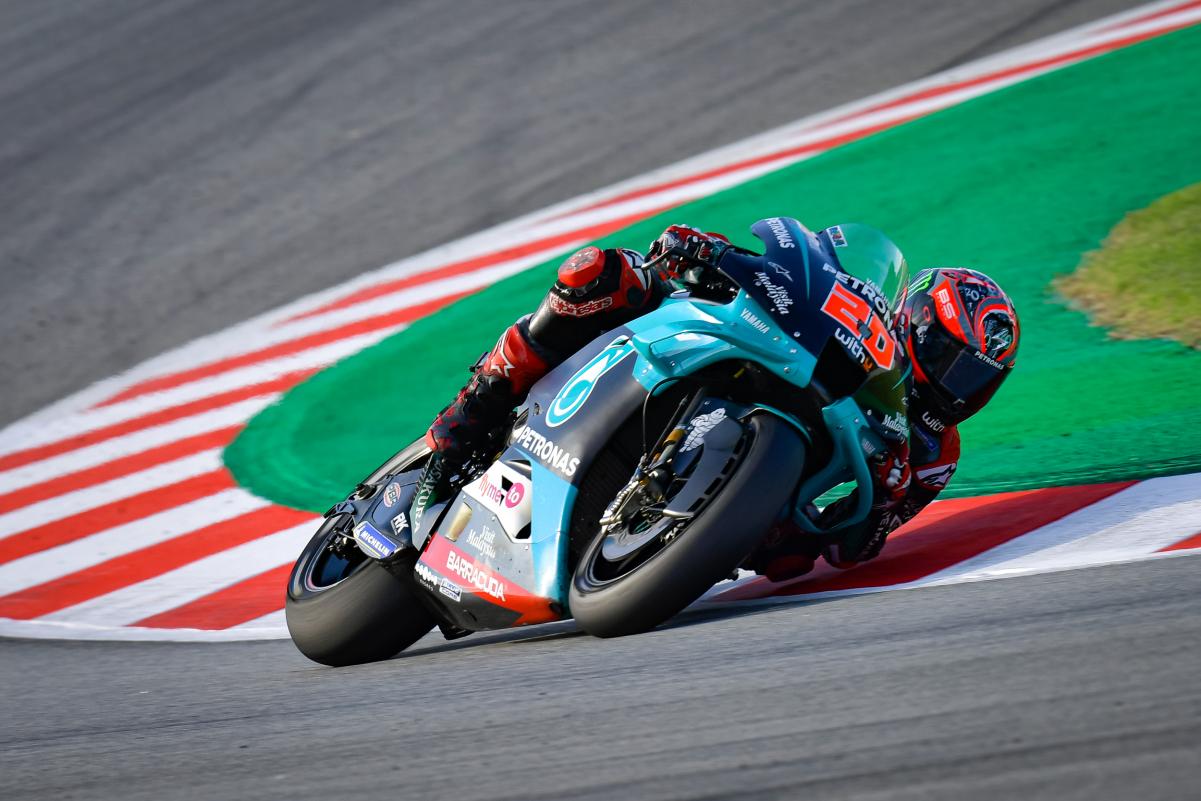 Fabio Quartararo has moved back to the top of the MotoGP standings after he won in Catalunya and previous championship leader Andrea Dovizioso was taken out.

Quartararo led the latter two thirds of the 24-lap race on his Petronas SRT Yamaha while Suzuki Ecstar got a double podium with Joan Mir second and Alex Rins third.

Morbidelli had taken the early lead and Miller followed him into the first corner from fourth on the grid, ahead of Valentino Rossi (Monster Energy Yamaha) and Quartararo.

There was drama behind for three Ducati riders when Danilo Petrucci (Ducati Team) had a moment through Turn 2.

While the Italian gathered up #9, he forced Johann Zarco (Esponsorama) to grab the brake and the Frenchman went down, taking Dovizioso (Ducati Team) with him.

Rossi passed Miller for second at Turn 5 and when the Australian barely got #43 stopped at Turn 10, Quartararo was also able to go through before the standing lap was done.

A top five rounded out by Mir ran together initially, although the Suzuki rider was losing touch with the four ahead of him when Quartararo passed Rossi for second at the start of Lap 6.

The Frenchman passed his team-mate Morbidelli for the lead three laps later, before the margin between third placed Rossi and fourth placed Miller stretched beyond a second on Lap 11.

Morbidelli ceded second to Rossi when he ran long at Turn 1 on Lap 14 having nearly crashed the #21 Yamaha under brakes, but got the spot back when Rossi did indeed crash at Turn 2 on Lap 16.

That incident meant a lead of over 2.7s for Quartararo and a podium position again for Miller, but for barely half a lap before he went wide at Turn 10 and opened the door for Mir.

The Pramac rider was by then struggling for grip, a not uncommon problem given all 22 riders started on the soft rear tyre due to Barcelona’s cold weather, and gave up fourth to Rins on Lap 20 at Turn 10.

Mir passed Morbidelli at the start of Lap 23 and Rins went underneath the pole-sitter at Turn 10 on the same lap.

However, Quartararo was gone by then and went on to claim a victory which puts him back on top of the points table, while Mir is now second in the standings.

Morbidelli did get fourth in the grand prix, behind Rins, while Miller resisted an attempted pass from Bagnaia at the start of the final lap to finish fifth.

Not far back from the Pramac Ducatis was Takaaki Nakagami (Idemitsu LCR Honda) in seventh and Petrucci got home in eight.

Last start winner Maverick Viñales (Monster Energy Yamaha) was not a factor at the Circuit de Barcelona-Catalunya, slumping from fifth on the grid to 15th after one lap and going on to take the chequered flag in ninth.

Cal Crutchlow (Castrol LCR Honda) rounded out the top 10 while Miguel Oliveira (Red Bull KTM Tech3) and Pol Espargaro (Red Bull KTM Factory) joined Rossi, Zarco, and Dovizioso as retirements due to crashes of their own.

In the championship, it is now Quartararo leading Mir by eight points, Viñales by 18, and Dovizioso by 24.

Miller is sixth in the standings at 33 points off the pace.

The next round of MotoGP is in France at Le Mans on October 9-11.