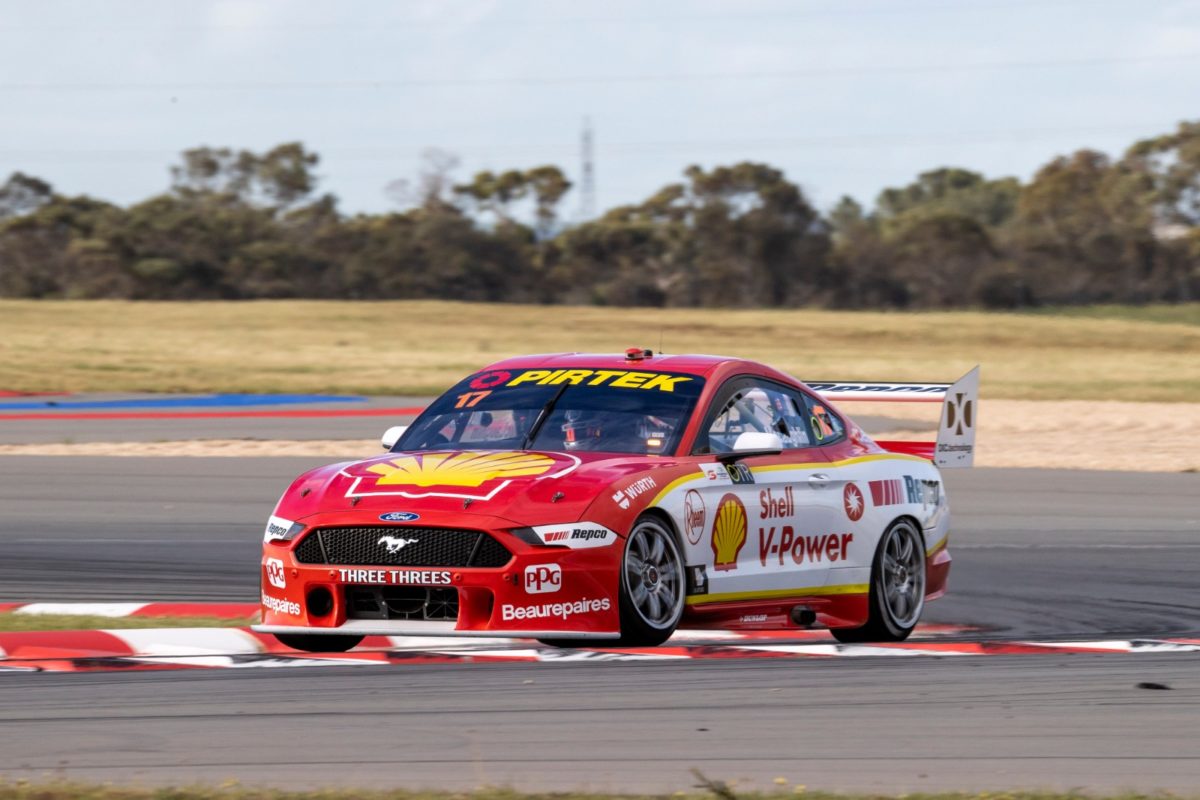 Scott McLaughlin has clinched the 2020 Virgin Australia Supercars Championship title by finishing second to Cameron Waters in Race 30 at the OTR SuperSprint The Bend.

McLaughlin started on pole but ceded his advantage to Waters when the latter swept around the outside at the first corner of the race.

Crucially, however, the DJR Team Penske driver remained ahead of Jamie Whincup, who held his qualifying position of third when the lights went out, and that effectively ran in the same order for all 32 laps.

Having needed only to beat Whincup in Race 30 to seal the deal, McLaughlin now leads the championship by 305 points with 300 on offer in the season-ending Supercheap Auto Bathurst 1000.

“It’s awesome, credit to everyone at Shell V-Power Racing,” said the now three-time champion, albeit unofficially until the very end of the campaign.

“It feels weird not being able to celebrate with the fans like normal and whatever.

“We’ve got one main one now, we’ve got the big one we can fully focus on and at Bathurst and have a massive crack at it.

“It’s been an awesome battle with Jamie throughout the whole year, then for Cam to get his first win of the year, congrats to him.

“At the start, I was trying to be safe but wanted to get the lead, but he did a great job. I’m stoked.

“I bet Sladedog’s (Bathurst 1000 co-driver Tim Slade) pretty happy at home watching because there’s not as much pressure now for him.

“We want to win the race. We’ll go hard and do what we need to, to win and have a crack. Bring it on.

For Waters, a second career race win after he shared victory with Richie Stanaway in the 2017 Sandown 500 consolidates his grasp on third in the standings.

McLaughlin (#17 Shell V-Power Mustang) and Waters (#6 Monster Energy Mustang) made fairly even starts off the front row but the latter went deeper at Turn 1 and rounded up the pole-sitter.

Coulthard capitalised on the pressure which Mostert was applying to Courtney to pinch fifth position from the Walkinshaw Andretti United driver through Turns 3 and 4 on Lap 3.

Further ahead, Whincup trailed McLaughlin by 0.6s when he pitted from third on Lap 8, and was followed into the lane by Courtney and Coulthard.

While they exited their respective pit boxes in the same order, the #44 Tickford Mustang spluttered as Courtney attempted to accelerate beyond the speed derestriction line and he was passed by Coulthard.

Waters and McLaughlin were 0.9s apart when they both took service a lap later, the #17 DJRTP Mustang filing back into the fast lane close behind the #6 Tickford Mustang before they rejoined the race track proper just ahead of Whincup.

Courtney broke into a lurid slide on the dirt after ending up on the outside of Coulthard through Turn 5 on Lap 10 but only lost the one position, to Fullwood.

McLaughlin moved the margin between him and Whincup beyond two seconds on Lap 19 as van Gisbergen (#97 Red Bull HRT ZB Commodore), who started 22nd but gained several spots in the cut and thrust of the opening laps, officially led the race.

The 2016 champion was into the lane for fresh working side tyres on Lap 20 and resumed in a nominal ninth but an effective eighth before Scott Pye (#20 DeWalt ZB Commodore) completed the cycle a lap later.

Mostert passed Coulthard on Lap 22 at Turn 3 before van Gisbergen also overtook the #12 Mustang, on Lap 23 at Turn 1.

Mostert went down the inside of Hazelwood at the same spot next time by, as did van Gisbergen another lap later again.

McLaughlin made small in roads into Waters’ lead but never looked a threat of stealing the race win, and did not need to anyway.

In the end, 3.36s separated them at the chequered flag, with Whincup another 1.59s in arrears.

Percat was fourth and van Gisbergen inherited fifth when Mostert slipped wide at Turn 6 on the final lap.

Car #25 got home sixth, from Hazelwood, Coulthard, Holdsworth, and Courtney.

The battle for the teams’ championship is still on, with DJR Team Penske’s lead over Triple Eight Race Engineering now exactly 100 points with 576 still up for grabs.

That is because just one event remains in the 2020 Virgin Australia Supercars Championship, namely the Supercheap Auto Bathurst 1000 on October 15-18. 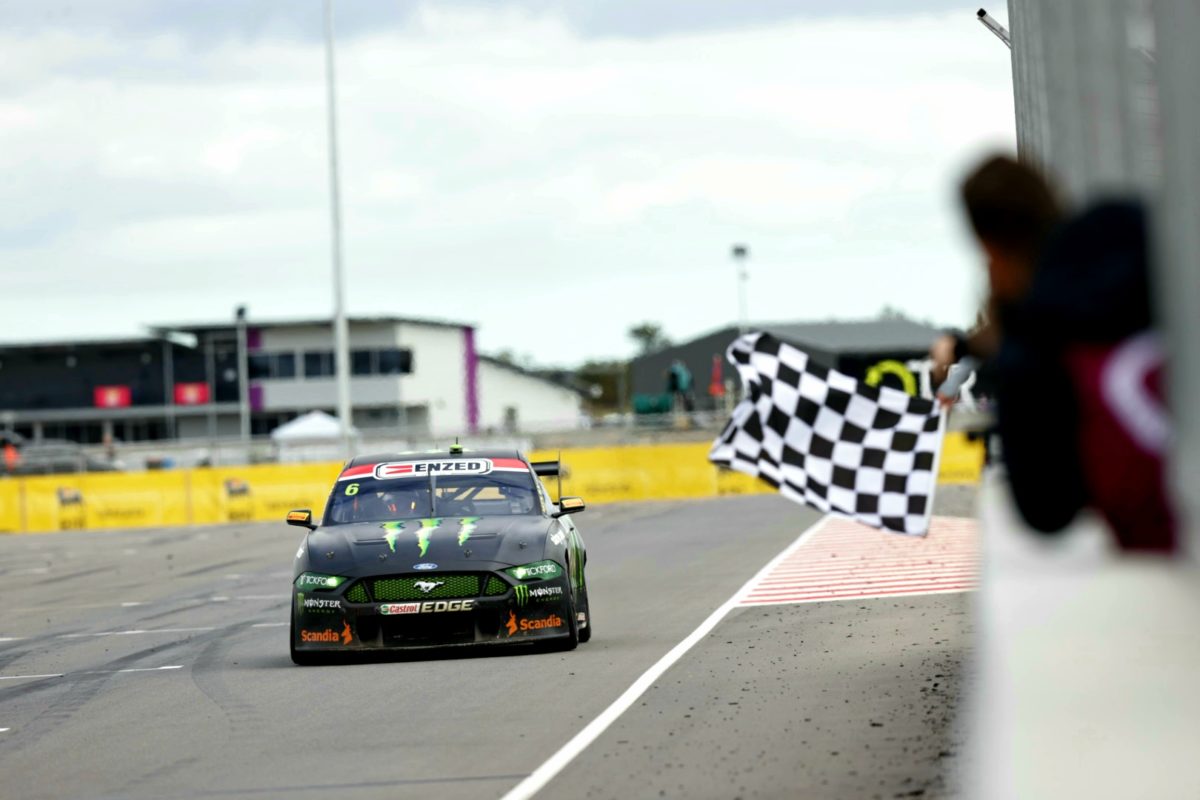