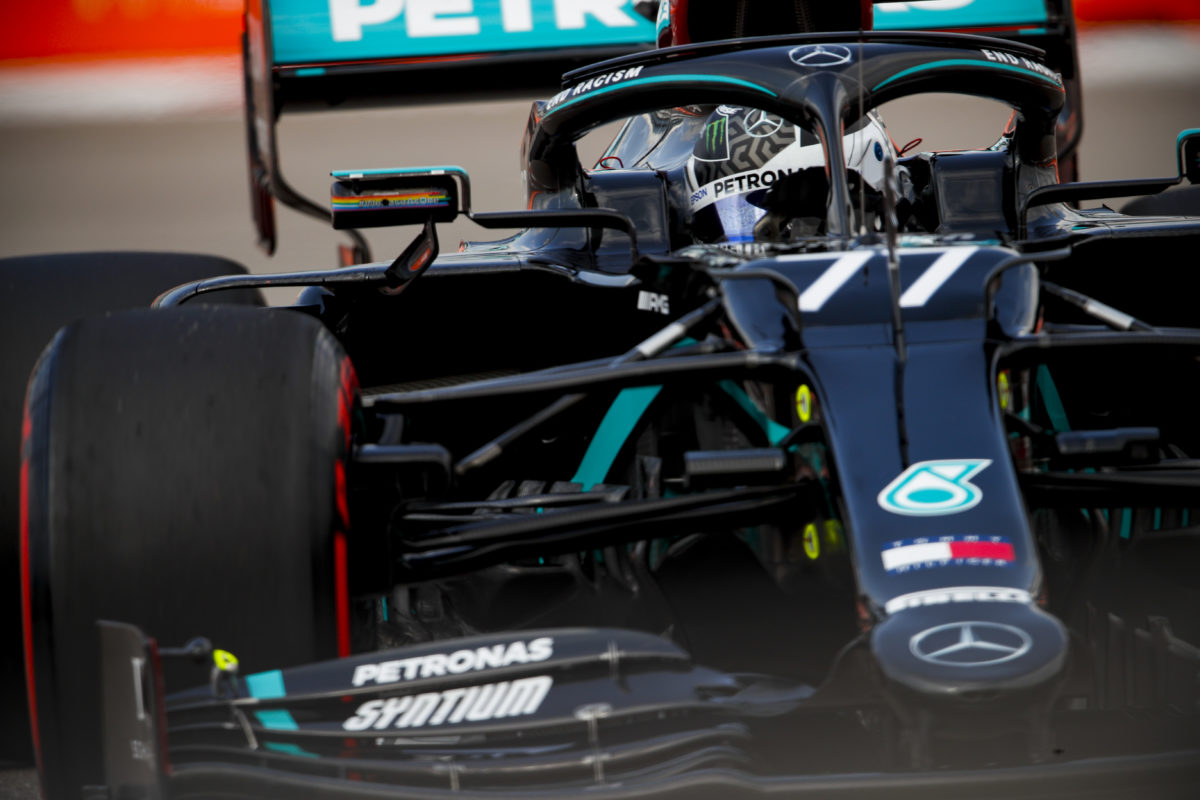 The Finn rose from third on the grid to second off the start before then improving to the lead when Hamilton served two time penalties at his first stop.

Max Verstappen finished second with Hamilton recovering to third at the end of the 53-lap encounter.

A solid jump from Bottas, coupled with a slipstream from Hamilton, saw the Mercedes driver move from third to second on the run to the second corner.

He then fanned out on approach to Turn 2 as if attacking his team-mate but was held wide and forced to settle for second.

In the pack, Sainz ran wide at Turn 2 before understeering into the barrier as he attempted to rejoin the race, firing back across the track as the pack went by.

Two corners later, Lance Stroll’s race ended early as he was tagged from behind by Charles Leclerc, spinning the Racing Point driver into the inside barrier.

After four laps behind the Safety Car, the field was released.

The restart was a straightforward affair with Hamilton getting enough of a jump to be untroubled into Turn 2, with Bottas similarly clear of Verstappen in third.

Two key moments then followed in quick succession as Race Control announced Hamilton would be handed a five second penalty for performing a practice start outside of the designated area.

No sooner had that been announced that a second penalty, for another instance of the infringement, was confirmed. Worth five seconds each, it made for a total of 10 seconds worth of penalties.

Prior to the race start, Hamilton had twice headed to the end of pit lane to perform a practice start, a move frowned upon by the stewards who penalised him five seconds for each instance.

On track he’d extended a 1.8s advantage over Bottas in second as the race settled down, and was called in initially on Lap 14. Still enjoying strong pace, and increasing his lead, the six-time world champion ignored the call and carried on.

Sergio Perez outfoxed Ricciardo at Turn 3, forcing the Renault driver to defend into Turn 2 before getting better drive out of the corner and stick his nose up the inside at the next corner.

By the time they reached Turn 4, the Racing Point had taken the place.

Ricciardo headed to the lane at the end of the lap, the first of the front runners to do so.

Hamilton stopped at the end of Lap 16 while holding a 2.4s advantage over Bottas.

The championship leader rejoined in 11th place after serving his two five second penalties prior to his new hard tyres being fitted.

That released Bottas into the lead, the Finn holding a 4.3s advantage over Verstappen with Ocon third.

On Lap 19, Ocon stopped and rejoined behind Hamilton just as the Mercedes driver dispatched of Sebastian Vettel’s Ferrari.

Perez lasted 20 laps before he took service and switched from soft compound tyres to hards, slotting into sixth behind Hamilton.

A radio message from Renault saw Ocon pull aside and release Ricciardo into eighth place and in pursuit of the yet-to-stop Vettel.

The Australian soon hunted down the Ferrari but pinched a brake as he made the move and skirted beyond the apex at Turn 2, running behind an orange kerb.

He was subsequently investigated for the off, as drivers had been instructed to rejoin the circuit through a bollard chicane should they run wide, which resulted in a five second penalty for the transgression.

Verstappen pitted from third on Lap 26 which opened the door for Bottas to stop a lap later without any immediate pressure.

The Mercedes driver rejoined still in the lead, with Leclerc sandwiched between himself and Verstappen until he was hauled in on Lap 29, promoting Kvyat to third and Hamilton to fourth.

Once the front runners had all stopped, Bottas led from Verstappen, Hamilton, Perez, Ricciardo, Leclerc, Ocon, and Kvyat.

Sizeable gaps between the leading protagonists produced stagnant racing for the most part from the completion of the pit stop sequence to the flag; Bottas managing the gap while a compromised Hamilton was toothless in his own pursuit of Verstappen.

In fourth, Perez endured a lonely run to the flag while Ricciardo slowly eased his way away from Leclerc in sixth – a point that would prove crucial in him maintaining the spot post-race.

There was one minor moment of intrigue when a Virtual Safety Car was called for on Lap 43 after Romain Grosjean destroyed a polystyrene bollard at Turn 2.

As drivers were required to navigate their way through a chicane formed in part by that bollard, race control neutralised proceedings in order to replace it.

A three way scrap over ninth which ignited between Lando Norris, Alex Albon, and Pierre Gasly provided the best entertaining on track.

Albon attacked Norris on Lap 46 but was forced to immediately defend from Gasly, coming off second best to the AlphaTauri driver and slipping out of the points as a result.

The Frenchman then homed in on Norris for ninth, using the slipstream on the run to Turn 2 to make the move on Lap 48.

Norris was then vulnerable to Albon, the McLaren driver struggling for grip as the lap count ticked down.

A mistake at the end of the back straight on Lap 48 offered the opportunity the Red Bull driver needed, Norris skating long after locking up before taking to the pits after running 45 laps on the tyres.

Out front, a faultless drive from Bottas claimed his second victory of the year to close the title fight by 10 points.

Verstappen finished second with Hamilton rounding out the podium.

Perez hung on to fourth, as Ricciardo did fifth despite his time penalty, with Leclerc in sixth ahead of Ocon, Kvyat, Gasly, and Albon.

Bottas snagged fastest lap alongside the win, a result which sees him close the gap in the title fight with Hamilton to 44 points.

In the constructors’ championship race Mercedes remains firmly in control over Red Bull, but the battle for third has condensed. McLaren is on 106, Racing Point 104, and Renault 99.

Formula 1 now moves on to Germany for the Eifel Grand Prix at the Nurburgring in October 11.